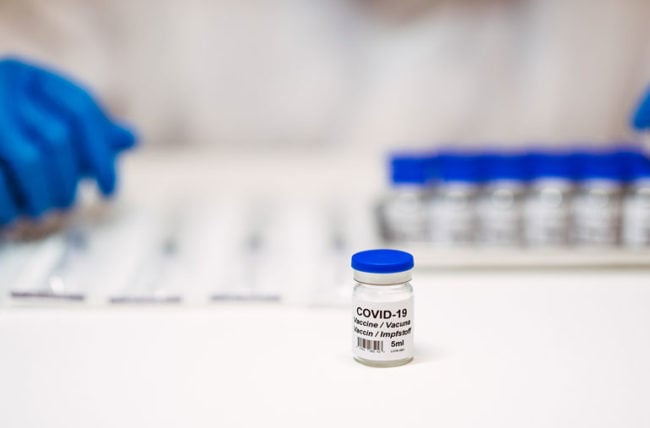 This article was originally published on Nov. 16, 2020. It was updated on Nov. 18, 2020, to reflect new information about this rapidly evolving situation.

Of all the ever-changing topics in the coronavirus (COVID-19) pandemic, none has been more closely followed than the development of a vaccine.

While several studies entered trials earlier this year, there’s been some good news on the work towards a successful vaccine in the flurry of information, showing promise for a solution.

“The vaccine development is happening very quickly and it seems like we’re hearing something new every week,” says pulmonologist Daniel Culver, DO.

To get an update on what’s happened and where things are now heading, we talked a bit more with Dr. Culver about the latest on these vaccine efforts.

After promising early results, pharmaceutical company Pfizer, in conjunction with BioNTech, announced the conclusion of their Phase 3 study showing their COVID-19 vaccine is 95% effective. “That means that 95% of the people who would have otherwise developed symptomatic COVID-19 did not,” Dr. Culver says.

According to Pfizer, a group of volunteers in a trial arm who received the vaccine – two injections given three weeks apart – developed 95% fewer cases than the trial arm group who were given a placebo. The rate was confirmed at seven days after the second dose, which Pfizer says indicates that protection from the virus firms up about 28 days after the first dose.

“This data comes from a set of 170 people who did develop COVID-19,” Dr. Culver adds. Of those 170 people, 162 were in the placebo group while only eight were recipients of the vaccine. “That means there was a large number of people who were involved in this one piece of the study. Because they still achieved such a high rate of success, it allows confidence about the effectiveness of the vaccine.”

Additionally, Moderna announced that its vaccine appeared to be 94.5% effective based on its ongoing trials. Out of 95 participants who contracted COVID-19, 90 participants were in the placebo group while only five were in the group that received the vaccine. The company reported that of the COVID-19 cases, 11 were severe but none of those cases were from participants in the vaccine group.

There’s still more research to do

While promising, Dr. Culver says there’s still more work to do. While Pfizer seems to have reached the necessary endpoints, he says we should know more about other vaccines’ effectiveness once a requisite number of patients in the study receive the vaccine.

“When we look at early data, we’re really getting a sneak peek in order to see if there’s enough evidence of overwhelming effectiveness that might allow the vaccine developers to apply for what’s called an ‘early use authorization’,” he notes.

That authorization, which comes from the U.S. Food and Drug Administration (FDA), would allow the vaccine to be made available sooner than a normal full trial would dictate. Pfizer is preparing to apply for this authorization and says they expect to distribute up to 50 million doses (enough for 25 million people) globally by the end of the year with 1.3 billion more doses distributed by the end of 2021.

Dr. Culver notes that companies must present two months of safety data from follow-ups with those who received the vaccine as part of an early use authorization, which Pfizer will do and Moderna plans to do in late November. Then, the FDA will need to sift through and review that data before a determination can be made.

In other words, it’s very promising news, but there could still be a wait for approval of a vaccine to be used in certain high-risk populations. “When we see early information, we have to take it with a grain of salt because it’s preliminary,” Dr. Culver says.

He continues, “Until we can look at the details, make sure everything lines up correctly and that there aren’t any surprises, we can be cautiously optimistic but we shouldn’t overreach our hopes.”

Besides Pfizer and Moderna, Dr. Culver notes there are several other trials currently taking place across the globe in the search for a viable coronavirus vaccine. “There are a number that are in what we call stage three clinical trials, which are really the last stage before application for approval to the FDA or the European Medicines Agency or other regulatory bodies.”

Besides the Pfizer trial, companies like Johnson & Johnson and AstraZeneca and have trials including tens of thousands of patients, he says.

What’s of particular interest is that there’s a difference between some of the vaccines. Specifically, some vaccines are using an approach that, Dr. Culver says, “has not been approved so far for use in vaccines.”

While there are differences between the approach of each trial, Dr. Culver explains that both Pfizer and Moderna vaccines use what’s called an mRNA strategy.

Many vaccines, including the coronavirus vaccines being developed by Johnson & Johnson and AstraZeneca, use an approach in which a weak or inactive version of a virus is used to generate an immune response.

But the mRNA approach uses what’s called “messenger RNA,” molecules that include codes to build proteins to fight specific viruses.

In this case, the messenger RNA causes the immune system to generate the “spike” protein that the coronavirus uses to attach itself to human cells. These spike proteins don’t cause damage but as part of the vaccine, they do trigger an immune system response that, according to the Pfizer trial, is strong enough to protect the body against the coronavirus.

And this approach is part of what’s helping the speed of the vaccine development, says Dr. Culver. “The technology with the mRNA approach allows us to quickly create these vectors and implement them into a platform that was already being developed.”

Will the vaccines be safe?

Given the speed of development of these vaccines, there have been questions about whether or not there’s been enough research and testing to ensure the vaccines are safe.

“The speed of development is a real example of partnership between multiple agencies including the federal government, the industry, academia and doctors pulling together to get these vaccines developed much faster than usual,” Dr. Culver says.

“We also need to remember that all the safety checks are still here in these trials. Several coronavirus vaccine trials have been stopped because of side effects or toxicities and that’s actually a good thing,” he adds. “That means we’re paying attention to what’s happening to the subjects in these trials and we’re carefully assessing whether or not the things that happened to the subjects are due to the vaccine or not.”

This cautious approach is normal in any clinical trial that’s as large as these. Dr. Culver also points out, “We’re still going through all the phases of the studies. The FDA is looking at the data very carefully and that there’s a lot of transparency around the analysis plan and the safety data.”

So far, side-effects of the Pfizer and Moderna vaccines have so far been similar to the side-effects some people experience when other adult vaccines: headache, fatigue, aching and even fever.

Dr. Culver says, “Here at Cleveland Clinic, we’ll be looking very carefully at the safety data before we recommend any of these vaccines for our families, our patients and our communities.”

As Dr. Culver already mentioned, there’s still a ways to go with these trials before we see widespread access to one or more of the vaccines. “We still don’t know the durability of the vaccines, how these will work in relatively uncommon populations, immunocompromised populations and older patients,” he says.

There’s also still the possibility of rare side effects that present themselves only after a larger number of people receive the vaccine, he says.

While Pfizer plans to begin distribution within a few weeks, it’s possible we could see the first dispersal of the Moderna vaccine, too, before the end of the year.

“By the second half of December, we could see availability for people who are at the highest risk, perhaps first responders and healthcare workers,” Dr. Culver says, “and after that, according to the plans in the various states, people with multiple comorbidities and elderly people living in congregate settings.”

Still, he urges patience, saying that more widespread availability won’t happen until next year. “I don’t think most people would have access until, at the earliest, the first quarter of 2021. And for the vast bulk of the population, the second quarter of 2021 is probably more realistic.”

The promise of a vaccine doesn’t mean you can let your guard down, though. Referencing the skyrocketing caseload across the country, Dr. Culver says, “In fact, this is exactly the wrong time to let our guard down given we’re seeing the largest surge of cases so far.”

There’s a lot of pandemic fatigue and with the weather getting colder and the holidays approaching, we’re at higher risks. “This is really the time we need to double-down on basic precautions,” he adds, “including social distancing, wearing masks and avoiding crowds.”

Even when the vaccines do get here, we still probably won’t be sure of their long-term durability (like if we’ll need to get them annually like flu shots).

“It’s making the hard choices that none of us want to make, which means limiting gatherings, not seeing people who we would rather see and not going to restaurants but these guidelines are necessary for the longer-term gains,” he says.

Already Vaccinated? Here’s Why You Shouldn’t Stop Wearing Your Face Mask Yet

Is It Safe To Get the COVID-19 Booster Shot If You’re Pregnant?

Next in Line: Kids Ages 12-15 Eligible for Pfizer’s COVID-19 Vaccine 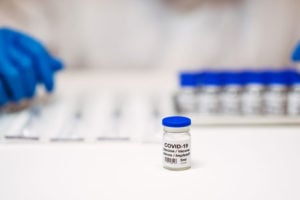 There’s good news from the coronavirus vaccine trial, but what, exactly, does it all mean? An expert weighs in.