Whether you have the battered knees of an athlete or you find that knee pain is slowing you down as you age, you likely know you may need a knee replacement soon. But if both knees hurt, should you have them replaced at the same time?

You can, says orthopedic surgeon Kenneth Greene, MD. But there are risks that come with having the two surgeries simultaneously.

“I explain to every patient that, clearly, knee replacement is a major operation,” he says. “When we do two at the same time, it puts more stress and strain on your body.”

If you’re considering simultaneous knee replacements, which also is known as bilateral replacement, here’s what you should know.

Why have simultaneous knee replacements?

The main benefit of bilateral knee replacements is convenience, Dr. Greene says. It’s one surgery time, one time away from work and one recovery period.

Other than that, there are no specific medical benefits to having both knees replaced at the same time.

Simultaneous surgeries may shorten your rehabilitation, he says. But you’ll still need to adopt an aggressive approach to your strength and flexibility training to maximize your recovery.

What are the risks of bilateral surgery?

It doesn’t matter whether you have one surgeon performing the surgeries consecutively or if two surgeons complete the surgeries at the same time. You’ll face several risks either way, Dr. Greene says.

Longer anesthesia — Because replacing both knees takes longer, you’ll spend more time under anesthesia. This may be introduce increased risk, particularly if you have pre-existing heart or lung disease.

More blood loss — Thanks to improved techniques, blood loss from a single knee replacement is typically limited, Dr. Greene says. However, if you have simultaneous replacements, you’ll have a higher risk of needing a blood transfusion due to hemoglobin loss, he says.

Blood clot risk — The likelihood is small, but some data points to a higher risk of pulmonary embolism, a blood clot that breaks off and lodges in your lungs. If this happens, the result sometimes is fatal.

Hospital re-admission — After two knee replacements, you’ll have an increased chance of going to a rehabilitation facility instead of going directly home following a single joint replacement. And spending more time in rehab boosts your risk of ending up back in the hospital, Dr. Greene says.

Who is a good candidate for bilateral replacement?

The best candidates are those who are active and have strength in the muscles, ligaments and tendons around their knees.

You’ll also fare better if your general health is good. It’s best if you have few other medical problems, such as any heart or lung disease.

Even then, Dr. Greene says, you should approach simultaneous surgery cautiously.

“If you’re young, healthy and a risk-taker, you can contemplate doing both knees,” he says. “I tell people the day of surgery, though, to tell me which knee is worse. That way, if the anesthesiologist tells me we need to stop after one knee — which actually hasn’t happened — the more symptomatic knee is fixed.”

How Long Does a Hip or Knee Replacement Last?

Are Your Earrings or Body Piercings Causing a Nickel Allergy?

Facing Shoulder Surgery? Is Joint Replacement or Fusion Best for You? 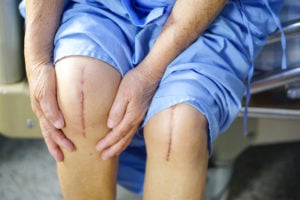 Should You Have Both Knees Replaced at the Same Time?

If you need to have both knees replaced, should you have them done simultaneously? An orthopedic surgeon explains the benefits and risks of bilateral replacement surgery.