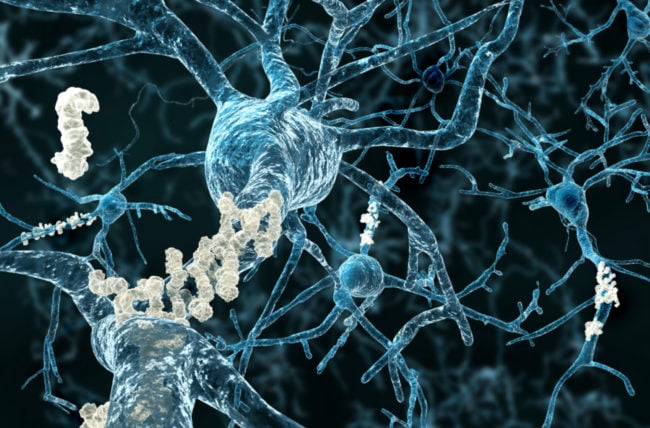 People with risk factors for heart attack and stroke such as obesity, high blood pressure, diabetes, high cholesterol, and smoking are also more likely to develop changes in the brain that can lead to Alzheimer’s disease, a new study shows.

These risk factors previously have been linked to higher odds of dementia, cognitive decline and Alzheimer’s disease, but it’s been unclear exactly how. Researchers theorize the risk factors might reduce vascular clearance of amyloid protein from the brain.

A team of researchers examined data from a 25-year period of 346 people who were dementia-free and had been evaluated for vascular risk factors and markers.

They found that people who smoked, had obesity, high blood pressure, diabetes or high cholesterol in their 50s were more likely to develop high levels of brain amyloid levels, which are protein fragments associated with Alzheimer’s disease, while in their 70s.

However, the study did not find a connection between later-life vascular risk factors and later-life brain amyloid deposits.

The results show that mid-life behaviors can impact our brain composition later in life, says neurologist Jagan Pillai, MD, PhD. Dr. Pillai did not take part in the study.

Each heart risk factor by itself may not be enough to increase the risk of Alzheimer’s disease, but having a number of these risk factors at the same time appears to be associated with a higher risk, he says.

“Having more than one vascular risk factor such as diabetes, high blood pressure, obesity or smoking history does translate into increased amyloid burden later,” he says.

Dr. Pillai says it’s important to note that the risk for having higher levels of brain amyloid was related to a person’s lifestyle while in their 50s and not their lifestyle in their 70s.

This suggests brain changes that happen in connection with risk of Alzheimer’s are a slow process that takes decades to develop, he says.

Preparing our bodies for health later in life is a lot like saving for retirement — we really shouldn’t put it off now and try to catch up later, Dr. Pillai says.

More research needs to be done to learn about the nature of the relationship between vascular risks and Alzheimer’s disease risks later in life and why the two are related, Dr. Pillai says.

Five million Americans age 65 and older are living with Alzheimer disease, the most common form of dementia, according to the Centers for Disease Control.

Complete results of the study appear online in JAMA.

Is It Normal to Get Depressed or Anxious as You Age?

Your Mood May Affect How Well Your Mind Functions These risk factors previously have been linked to higher odds of dementia, cognitive decline and Alzheimer’s disease, but it’s been unclear exactly how.