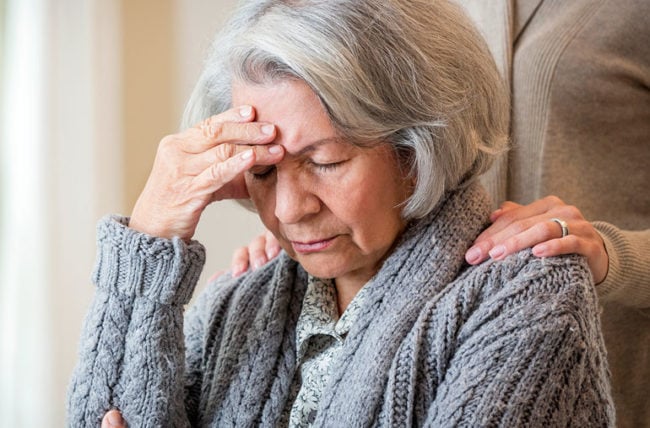 If you suffer from depression, there’s a good chance your mental sharpness is diminished along with your mood.

When that happens, you might fear that Alzheimer’s disease or another form of dementia has begun. The symptoms of depression may be mistaken for signs of dementia, but they also might be an indicator of cognitive impairment, especially if the depression begins late in life.

For all these reasons, if you have mood and/or memory troubles, seek an evaluation to determine the cause and find out if treating depression can counter any cognitive problems you might be experiencing.

“We know that depression takes away your cognitive crispness and efficiency,” says psychiatrist Leo Pozuelo, MD.

Many times, somebody may be referred because they have what’s believed to be dementia, but it turns out they have depression. You treat the depression, and they recover their cognitive skills.

“Vice versa, people who have established dementia are at higher risk of having depression,” Dr. Pozuelo explains. “That’s why it’s always important to screen for depression in people who are having cognitive problems.”

What’s the link between depression + dementia?

Depression may affect more than your mood. The mood disorder has been associated with increased inflammation, which studies suggest may play a role in dementia as well as cardiovascular disease. Also, if you feel down, you might be less likely to adhere to a healthy lifestyle and more prone to engage in unhealthy behaviors, such as binge eating/following a poor diet, remaining sedentary, smoking and consuming alcohol in excess — all of which may affect your brain health and cognition.

Several studies have implicated depression and anxiety as potential risk factors for dementia later in life. For example, researchers reported that among more than 1,100 older adults, depression was associated with a reduction in brain size and increases in memory problems and markers of brain aging. In other research, scientists analyzing data from 34 studies (involving a total of 71,244 dementia-free participants) found that depression was significantly associated with a decline in cognitive function.

What symptoms do depression and dementia have in common?

Depression and dementia share symptoms, which can make it difficult to distinguish between the two conditions:

Compounding the situation is that both disorders can occur at the same time, and depression may make existing cognitive impairment worse, explains geriatric medicine specialist Ronan Factora, MD.

Seek help for your depression

The only way to find out for sure what’s causing your cognitive troubles is to seek an evaluation from a healthcare professional. The physician can diagnose depression using a simple questionnaire, and they can then decide if further cognitive testing is necessary.

If your cognitive complaints are due primarily to depression, treatment with psychotherapy and, if necessary, medications may restore your cognitive function along with your mood.

Addressing your depression may offer some benefit even if you already have some cognitive decline. In one study, researchers reported that in patients with mild cognitive impairment and a history of depression, treatment with antidepressants known as selective serotonin reuptake inhibitors (SSRIs) for more than four years delayed the progression to Alzheimer’s dementia by about three years compared with shorter-term SSRI treatment, use of other antidepressants or no treatment.

“If you feel depressed, bring it up with your doctor to see if something else is going on, particularly if it’s new,” Dr. Factora advises.

“In folks who are older, the common thing to do is to say it’s just due to aging, but that makes you ignore treatable conditions, and depression is very treatable.”

What you can do to protect your mood + brain

Top 7 Benefits of Vitamin B6

Are Your Memory Changes Due to Getting Older? How to Tell Your Mood May Affect How Well Your Mind Functions

Depression can contribute to cognitive problems and treating it may improve your thinking skills. Our experts explain.