Sometimes, two arteries are better than one.

For people with diabetes who have multivessel or extensive coronary artery disease, we have learned that bypass surgery to give blood a new pathway to the heart is better than angioplasty, which involves using a tiny device to open up narrowed blood vessels.

Various studies, such as FREEDOM and ASCERT support the use of bypass surgery. However, these studies did not look at what specific type of bypass surgery is best. For people with diabetes who need coronary bypass surgery, we’ve learned that one technique works particularly well that uses two arteries from the chest instead of the saphenous vein from the leg.

This technique is called bilateral internal thoracic artery (BITA) grafting. Our research confirms what we have observed: BITA grafting and complete restoration in blood flow improve surgical outcomes for our heart patients who also have diabetes.

One reason why surgeons have tended not to use the BITA is because of concerns about wound infection involving the breast bone. People with diabetes, in general, are at higher risk for infection. So there has been some anxiety about using two arteries for the procedure.

However, the risk for wound infection is rare except in very overweight individuals who have diabetes with widespread hardening of the arteries and in people with poorly controlled diabetes.

For those individuals, the risks of infection need to be weighed against the longer survival expected with BITA grafting. In addition, the use of meticulous harvesting techniques can reduce the risk of infection and allow our surgeons to offer BITA to more people who may benefit from it.

Why using chest arteries is better

Over the past decade, surgeons observed that the traditional leg vein grafts we used developed problems. The grafts started to narrow or close about a decade after surgery.

The use of an artery from the chest, the internal thoracic artery, greatly improved long-term results. People do better for longer and need fewer repeat surgeries.

There are two internal thoracic arteries, one on the left side, and one on the right side of the chest area.  Ordinarily, only the left artery is rerouted in CABG surgery. In certain cases, both left and right arteries are used to restore blood flow to the heart.

We now know that using both chest arteries improves outcomes for heart patients, and we conducted a study to confirm this benefit for those with diabetes in particular.

Our research shows that using both the left and right internal thoracic arteries can make the most of restoring blood flow and yield the best short- and long-term outcomes for people with diabetes.

We looked at the surgical records from just under 12,000 individuals with diabetes who underwent CABG surgery. Some had traditional leg vein graft surgery. Others had surgery involving grafting of one artery. And some underwent BITA graft surgery.

We found that those people with diabetes who underwent BITA grafts had better short- and long-term survival than those who had the other types of surgery.

Having Heart Surgery? How 2 Techniques Can Open Your Artery Blockages

Swimming: Joint-friendly and Good for Your Heart 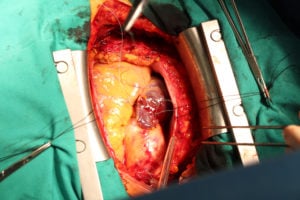 Our research confirms what we have observed in our patients: BITA grafting and complete restoration in blood flow improve surgical outcomes for our heart patients who also have diabetes.