That’s a question Cleveland Clinic researchers hope to answer in a pioneering study funded by the National Institutes of Health.

“Despite advances in preserving brain tissue in acute stroke, hundreds of thousands of stroke patients wind up permanently disabled in the United States alone,” says neurosurgeon Andre Machado, MD, PhD, who is leading the study.

“This is the first study to use deep brain stimulation to try to recover lost motor function on the paralyzed side of a stroke survivor’s body.” The work builds upon 10 years of laboratory research done in partnership with Dr. Kenneth Baker, a neuroscientist at Cleveland Clinic.

Stroke survivors rely mainly on physical and occupational therapy, which bring some recovery to most patients. But about half the survivors are so disabled that they need help from a family member or caregiver to perform daily activities.

Next, they implant a pacemaker-like pulse generator, or battery, in the chest and tunnel a wire beneath the skin, connecting it to the brain electrode.

The brain electrode delivers tiny electrical pulses to a specific area of the brain, changing the activity of a network of brain cells. “When we use DBS for a movement disorder like Parkinson’s, we change neuronal activity to suppress symptoms such as tremor and rigidity,” Dr. Machado says.

In the new study, investigators are not trying to suppress a symptom like tremor. Rather, they are trying to enhance the recovery of a function — movement — that has been lost as a consequence of the stroke.

The NIH’s Brain Research through Advancing Innovative Neurotechnologies (BRAIN) initiative awarded nearly $5 million in funding for this study. Cleveland Clinic is enrolling patients who have had a specific type of stroke (middle cerebral artery) 12 to 24 months ago and have severe weakness on one side despite physical therapy.

Attempting to undo the damage

The first stroke patient in the DBS study will have her device programmed in March 2017. Improvement could occur within several weeks.

“We need more and better options to help the many patients who remain chronically disabled after a stroke,” Dr. Machado says. “The opportunity here is to explore a new avenue that can augment the recovery patients experience from physical therapy over the long term.”

Over the next four to five years, the study team hopes to determine:

“The research that led to this study was all done at Cleveland Clinic and is a testament to our collaborative model. We are working across several areas of medicine and science to make this possible,” Dr. Machado says. “This work could significantly advance the field of stroke rehabilitation and eventually allow us treat even more brain diseases with DBS.”

Impact of Damage from Stroke is Far More Than Physical

After Your Stroke: How to Handle 5 Common Complications

Can Pink Noise Help You Sleep? 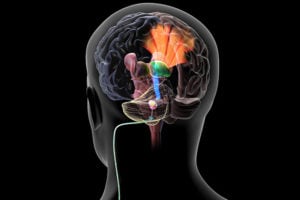