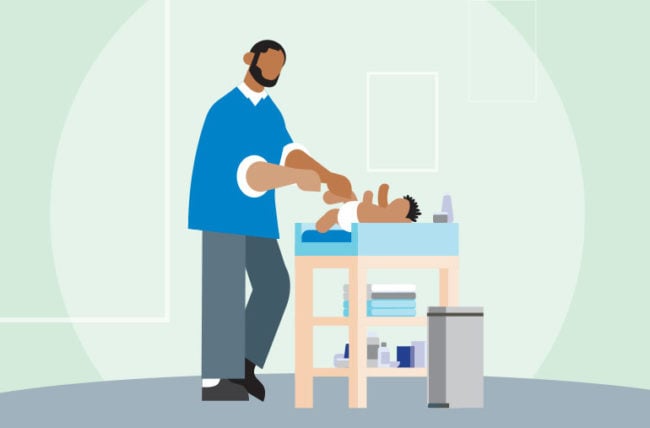 When your baby has diaper rash, it’s hard not to feel a little bit heartbroken. You can tell that your littlest love is in pain, and you want to do whatever you can to make things better. But how?!

First, take a deep breath: Diaper rash is the most common kind of skin problem that affects infants. And while your baby may seem miserable in this moment, this is a solvable problem, and there are a few quick steps you can take to get your kiddo on the mend.

Pediatrician Jacqueline Kaari, DO, lets us know what to do to treat diaper rash and even prevent it from coming back.

What is diaper rash?

Diaper rash usually happens when your baby wears a wet diaper for too long.

If you’ve ever gotten soft, white, wrinkled fingertips from staying in a swimming pool for too long, you know that wet skin can start to break down, which makes it more prone to damage. When your baby’s diaper gets wet, the same thing starts to happen. Their already-delicate skin rubs up against the diaper, which causes chafing and ultimately turns into a rash.

The American Academy of Pediatrics says more than half of all babies between 4 and 15 months develop diaper rash at least once in a two-month period. And some kids’ skin is just more prone to it than others.

“Some children tend to have more sensitive skin, which includes the diaper area, they may have more frequent rashes,” Dr. Kaari says. “But other children hardly ever have them at all.”

Diaper rash can range from mild, with just a little bumpiness and redness, all the way to severe, resulting in open sores that become infected. Dr. Kaari advises on what to try first and when to see a doctor.

Babies get messy, especially in the diaper region — but in the case of diaper rash, don’t use regular wipes, which can further irritate this sensitive area.

“If your child just seems to have a generalized diaper rash, it’s best to keep the area clean using plain water and a soft cloth so that you don’t irritate the skin even more,” she says.

If you need to clean them better than you can manage with just water and a washcloth, wash their bottom in the tub.

In the case of mild diaper rash, simple products are best. Dr. Kaari recommends A&D® ointment or Vaseline®, which help protect the area. These products are considered occlusive, meaning they create a barrier on the skin.

“That way,” Dr. Kaari says, “when they have another wet or dirty diaper, the area is protected and won’t get irritated again.”

3. Try a product with zinc oxide

If a simple ointment doesn’t help, it’s time to scale up your efforts with another over-the-counter product — one that contains zinc oxide. “That usually helps promote healing and gives a lot of protection,” Dr. Kaari says.

Hopefully, that’ll do the trick. “Most of the time, doing that will help, especially if they’re also changing their child’s diaper frequently and switching up some of the products associated with sensitive skin.” (More on that in a moment.)

The internet is full of suggested home remedies to clear up diaper rash and return your baby’s bum back to its regular soft, smooth state. But Dr. Kaari warns against putting anything out-of-the-ordinary on your child’s bottom.

“You want to be careful when your baby has broken skin, which can happen with a bad diaper rash,” Dr. Kaari says. “Be really cautious about what you put on there because you don’t want to cause any more irritation or anything that’s going to cause infection.”

So-called home remedies like witch hazel and apple cider vinegar are acidic, which can irritate sensitive skin. Another common internet tip is a paste made of baking soda and water, which Dr. Kaari says could help keep their skin dry but ultimately won’t do much else.

One alleged home remedy, aloe vera, can be soothing so long as you only use it in its purest form — ideally right from the plant. “A lot of the preparations of aloe vera you buy for sunburn have other ingredients in them that could be irritating to diaper rash,” she warns.

How to prevent diaper rash

Once your baby’s bum has healed, you’ll feel eager to make sure their diaper rash doesn’t return. Dr. Kaari shares a few tips for keeping diaper dermatitis at bay.

Standard baby wipes can rub and chafe in a way that contributes to diaper rash, so consider switching to a water-based wipe that’s less likely to cause trouble. “WaterWipes® are baby wipes that are 99% water,” Dr. Kaari explains. “They’re a lot less irritating than some of the other wipes.”

If your baby has sensitive skin, the type of diaper you use could make a difference in whether or not they develop diaper rash, too. And if you’ve recently switched to a new kind of diaper, that could’ve been a contributing factor in why your baby got diaper rash to begin with.

“Sometimes, babies’ skin can become irritated if their parents change diaper types,” Dr. Kaari says. “Maybe the new ones are made out of different materials or they’re not as absorbent, and suddenly that causes a rash.”

OK, OK, this one can be tricky, but hear us out. Bacteria loves a dark, wet place to grow — and indeed, diapers are dark, wet (and kind of gross) places. Fresh air can help, well, air out your baby’s bum, which can, in turn, help their diaper rash to clear up. “Allowing the air to reach that area can sometimes be really helpful,” Dr. Kaari advises.

When to see your baby’s doctor for diaper rash

If your baby’s diaper rash isn’t clearing up, they’re probably pretty miserable. “Every time they fill their diaper, that rash is going to become irritated, which is very uncomfortable for them,” Dr. Kaari says.

If you’re trying all the right things at home but can’t seem to kick the rash, it’s time to see your child’s pediatrician, who can troubleshoot what’s going on. It’s possible, for example, that their diaper rash is exacerbated by food allergies, or they could have yeast diaper rash, an infection that requires a prescription antifungal cream. Your pediatrician can help ensure that things clear up and hopefully don’t return.

What’s Behind Your Baby’s Diaper Rash?

What to Do If Your Child Has Eczema

How To Get Rid of Diaper Rash

It can be heartbreaking when your baby has a painful diaper rash. You want to make them feel better, but how? Our pediatrician explains the best ways to treat diaper rash, and which methods to avoid.