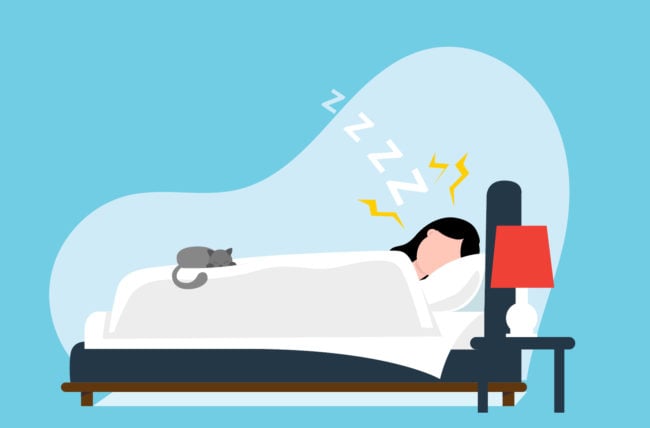 Do you snore so loudly it sounds like you’re sawing logs or snorting throughout the night? If so, you’re not alone — snoring is very common.

Snoring can be disruptive to a bed partner and cause health problems, though, so it’s worth examining what’s going on when your ZZZs are noisy.

And it turns out there are several possible causes for snoring, some more serious than others, says sleep medicine specialist Nancy Foldvary-Schaefer, DO, MS.

Snoring is quite common. Experts estimate that snoring affects millions of people, either occasionally or on a regular basis.

When your upper airway is weak and floppy, it can become narrower. That means the path your air takes as it flows through your mouth and nose can become obstructed.

“Snoring is caused by the muscles that support your upper airway getting weak and floppy at night,” explains Dr. Foldvary-Schaefer. “And so snoring is the sound your airway makes when it’s unstable.”

Snoring can be an occasional occurrence — for example, during spring allergy season or if you have a sinus infection — or something that happens on a regular basis.

The causes of snoring

Causes of snoring vary from person to person, and can differ depending on your age and any health problems you might have.

In many cases, snoring is one of the first signs of obstructive sleep apnea, a health condition where your breathing pauses or is disrupted while you’re asleep.

Symptoms of sleep apnea include daytime sleepiness or fatigue, gasping for air or choking episodes at night, and a bed partner witnessing your breathing pause while sleeping.

“Many people with sleep apnea are not aware that they stop breathing when they sleep,” says Dr. Foldvary-Schaefer, “or that they’re making snoring or snorting sounds to open up their airway again, after their airway closes on them.”

The roof of your mouth or your uvula is longer

If the roof of your mouth is longer or softer than usual — or if your uvula, or the dangling tissue in the back of the mouth, is longer — the opening from your nose to your throat can be narrower. This can partially block your airway. When you breathe, this can become an issue — these things vibrate and can bump against one another. Result: a snoring sound.

If you have partially blocked nasal passages, you have to make an extra effort to transfer air through them. This can pull together or collapse the soft and dangling tissue, resulting in snoring.

Injuries to your nose, such as a deviated septum (the wall that separates one nostril from the other) or nasal polyps (inflammatory growths) can also cause the kind of obstruction that leads to snoring.

Sleeping on your back is more associated with snoring than other positions, such as sleeping on your side or stomach. Why? Sleeping in that position can cause your tongue to relax toward the back of your throat, resulting in a partially obstructed airway. A 2009 study of 2,077 sleep disorder patients found that snoring was caused by sleep position in 54%.

Having too much to drink before bed can result in relaxation of the muscles that keep your upper airway open, which can cause snoring. “Alcohol at nighttime is a central nervous system depressant,” says Dr. Foldvary-Schaefer. “It can make your airway more floppy.”

When is snoring a problem?

“In the sleep clinic, it’s not always easy to know who might be a snorer and who might have sleep apnea,” notes Dr. Foldvary-Schaefer. “Snoring is on the mild end of the spectrum of sleep-disordered breathing.”

However, what your snoring sounds like could be a clue if there’s something more serious going on. “People who talk about loud, disruptive snoring are more likely to have sleep apnea,” says Dr. Foldvary-Schaefer. “If that sounds like you, you should talk with your healthcare provider about a sleep study.”

Snoring is often only one of the symptoms you might exhibit, though. “Most people we see who snore end up having other symptoms of sleep apnea,” says Dr. Foldvary-Schaefer. These include:

In these cases, you would certainly also qualify for having a sleep study to rule out sleep apnea.

If left untreated, obstructive sleep apnea, especially if it’s in the moderate to severe range, can be associated with serious health problems.

Dr. Foldvary-Schaefer says people in this case have an increased risk of metabolic disorders such as obesity and diabetes, as well as a higher risk for cardiovascular disease, high blood pressure, heart attacks, stroke and even cognitive impairment. Serious heart conditions, including cardiac arrhythmias, are another potential outcome of untreated sleep apnea.

Other side effects include excessive daytime sleepiness and impaired concentration, which can lead to drowsy driving and even poor memory and concentration.

“In some cases, consultation with an ear, nose and throat surgeon can help evaluate if a surgical procedure may be the answer to treating snoring,” says Dr. Foldvary-Schaefer.

Waking Up With a Headache?

If You’re Having Trouble Sleeping, Here’s What To Do

Do You Need a Sleep Test? Ask Yourself These 8 Questions First Learn about the common causes of snoring — and why it’s important to get checked out if your snoozing is disrupted or disruptive.