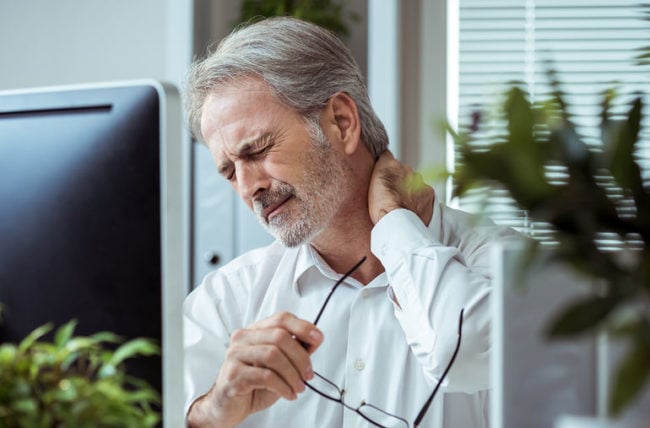 Do you sometimes feel pain in your neck? If so, you’re in good company – about half of us will experience neck pain some time during our lifetimes.

The good news is most neck pain is mild and will go away on its own or with simple treatment. It may be caused by a strained muscle or ligament, poor posture or repetitive stress.

“People can sleep in an awkward position or overdo yard work and get a strain in the soft tissues in the neck,” says pain specialist Russell DeMicco, DO.

As we get older, this may be made worse by, or worsen, underlying degenerative changes.

Your neck changes with age

The top portion of your spine (called the cervical spine), along with supporting structures, makes up the neck. The spine is a stack of bones (vertebrae) separated by cushioning disks made of cartilage. A hollow column running through the middle contains the spinal cord. Small joints behind each vertebra called facet joints connect each vertebral body to the vertebrae above and below.

The vertebrae are connected by ligaments and supported by muscles. At each level of the spine, nerves leave the spinal cord through openings. From the cervical spine, they extend to the arms.

Over time, degenerative changes happen to these neck structures in just about everyone. The disks between vertebrae can become thinner. The facet joints can develop osteoarthritis, meaning the cartilage covering the ends of the bones at the joints wears down. Bone spurs can form at the edges of the vertebrae and ligaments can thicken.

These changes will be visible on an X-ray, “but just because we can see them doesn’t mean people feel them,” Dr. DeMicco says.

These changes don’t always cause symptoms, but sometimes they do. In addition, an injury or added stress from poor posture or strains can make you more likely to have symptoms than before you had these degenerative changes. This means it’s especially important to do the things that will reduce stress on the neck.

A strain in the neck

Your 10- to 12-pound head is meant to be aligned straight over the top of the cervical spine. Habitually tilting your head forward can put stress on the ligaments, tendons and muscles.

You may not even be aware you are doing this. When you drive, is your head back against the headrest? Or are you hunched forward? When you work at a computer, is your head leaning forward to look at the monitor?

What about using a device, such as a smartphone, tablet or e-reader? Look around and you’ll notice lots of people bending their heads forward as they interact with their devices. This leads to “text neck,” a repetitive strain injury.

You can also get a neck strain from holding your head in an unnatural position for a long period of time or sleeping with your head in a bad position.

Sometimes neck pain isn’t coming from the soft tissues, but rather from the joints. Osteoarthritis in the facet joints of the cervical spine is similar to osteoarthritis in other joints. It may cause pain and stiffness.

“Neck stiffness may last for a few minutes after getting out of bed in the morning, and it usually is relieved with motion or by taking a hot shower,” Dr. DeMicco says. You may not feel too much pain during the day, but by the end of the day the symptoms may return.

Some of the degenerative changes in the cervical spine may cause nerves to be pinched. If this happens, symptoms will be felt in the arms more than the neck. Typically, there will be numbness and tingling, along with pain, which can progress to muscle weakness.

“If you have pain that shoots into your bicep, down your forearm and into your fingers, we know it’s coming from an irritation of a nerve in the neck,” Dr. DeMicco explains.

A nerve can get squeezed from spinal stenosis or a herniated disk. Spinal stenosis develops from the accumulation of degenerative changes over time. Bone spurs, thickened ligaments and osteoarthritis can cause openings where nerves leave the spinal column to narrow. This may pinch a nerve.

A herniated disk can occur when the tough outer layer of the disk starts to deteriorate. A weak spot can allow part of the soft inner portion to leak out and press on nearby nerves.

How to reduce neck pain

Most neck pain is relieved with measures such as rest, heat or ice and improving posture. While a short period of rest can help, it’s important to maintain normal activities as much as possible.

For people younger than 65, Dr. DeMicco might recommend non-steroidal anti-inflammatory drugs (NSAIDs), such as ibuprofen (Advil, Motrin) or naproxen (Aleve). For those over 65, for whom side effects of NSAIDs may be greater, he suggests trying acetaminophen (Tylenol) first. A muscle relaxant, such as cyclobenzaprine (Flexeril) may also help.

“The best type of exercise is the one you’re going to do, whether it’s yoga, Pilates, swimming or something else,” he says.

Most people improve within 10 to 14 days. If three or four weeks go by and you’re still having pain, see your doctor. The doctor may recommend physical therapy or spinal manipulation to help restore range of motion and improve function.

A tight knot of muscle fiber, called a trigger point, may be treated with an injection of anesthetic (such as lidocaine) if other measures, such as massage, heat or ice and exercise, haven’t worked. Surgery is rarely needed for neck pain.

If pain continues beyond six weeks, your physician may consider imaging studies to identify structural problems or to rule out less common but more serious causes of symptoms, such as a tumor or infection.

3 Top Tips to Avoid a Stiff Neck from Cycling

Is It Safe to Crack Your Back?

Is Spinal Fusion Right for You?

How to Get Rid of a Stiff Neck

8 Remedies For Low Back Pain 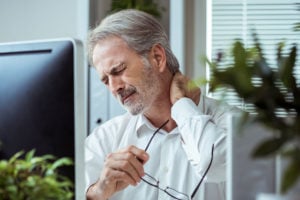 What’s Causing That Pain in Your Neck (and What Can You Do About It)?

Neck pain is a common problem that may worsen as we get older. The good news is that it usually improves with simple measures.