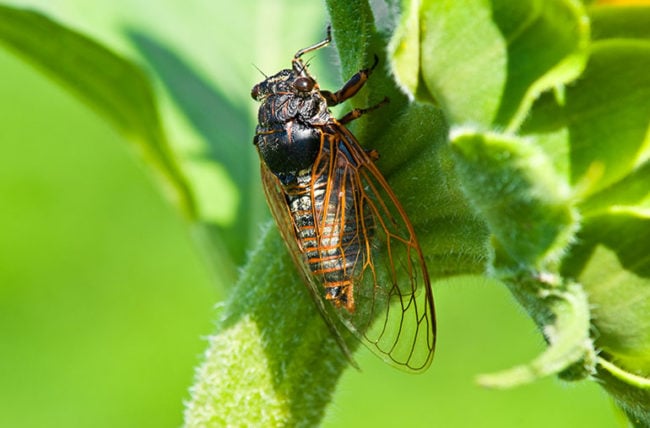 They sing, they soar, they swarm, they… make for a tasty snack? Brood X cicadas have descended upon the Eastern United States for the first time in 17 years, and they’re showing up on some peoples’ plates.

Entomophagy — the eating of insects — is common around the world, especially in parts of Asia and Africa, as many insects have been found to be an excellent source of essential nutrients, minerals, vitamins and proteins. They’re thought to be a healthy, sustainable alternative to meat.

So are cicadas edible? Dietitian Beth Czerwony, RD, weighs in on whether it’s safe to eat cicadas, who should avoid them, and how to catch them.

First things first: Eating cicadas is not for everyone. You should avoid consuming these crunchy critters if you fall into any of the following groups:

For people who don’t fall into any of those categories, cicadas are absolutely safe to eat.

And though there’s little formal data on the nutritional value of cicadas, Czerwony compares them to crickets, which are eaten by people around the world. “Both insects are very high in protein and low in fat,” she says.

If you’re going to eat cicadas, though, it’s important to collect them from an area that hasn’t been subjected to toxins.

“Remember: They’ve been in the ground for 17 years, so they’ve been able to absorb pesticides, lawn fertilizers, and any other chemical you put on your lawn,” Czerwony says.

If your own lawn has been chemically treated, head someplace a little bit more wild and untouched to collect cicadas for eating.

How to eat cicadas

A quick internet search turns up recipes for candied cicadas, cicada soup, cicada cupcakes and even craft cocktails to accompany your cicada-laden culinary creations. These crunchy, winged critters have a nutty flavor and a shrimp-like quality, making them very versatile.

“You can treat them like you would any kind of seafood,” Czerwony says. “You can saute them, you can deep-fry them — there are lots of options for people who want to take the opportunity to try eating them during this 17-year event.”

But first, you have to gather them.

How to catch cicadas

Any kind of cicada is safe to eat, but experts suggest gathering tenerals — cicadas that that have just molted — before their exoskeletons turn hard and darken in color.

“That’s when they’re best because they’re still tender, and they’re not going to be too hard,” Czerwony says. Cicadas lose muscle mass as they age, so newly molted bugs are also the juiciest.

Keep an eye out for areas littered with already-shed exoskeletons, as this indicates that more cicadas are likely lurking underground in the same place. You’ll want to head out late at night or early in the morning, which are considered the best times to find tenerals.

“The most humane way of collecting them is to collect them in a paper baggie and then freeze them for 30 minutes,” Czerwony advises. Then, you’re ready to prepare them however you’d like — and to get snacking. Bon appétit!

How to Enjoy Summer Cookout Food While Staying Healthy

Diagnosed With Celiac Disease? How (and Why) to Follow a Gluten-Free Diet

Are Cicadas Safe to Eat?

They sing, they soar, they swarm, they… make for a tasty snack? Brood X cicadas have descended upon the Eastern United States for the first time in 17 years, and they’re showing up on some peoples’ plates. A dietitian weighs in.