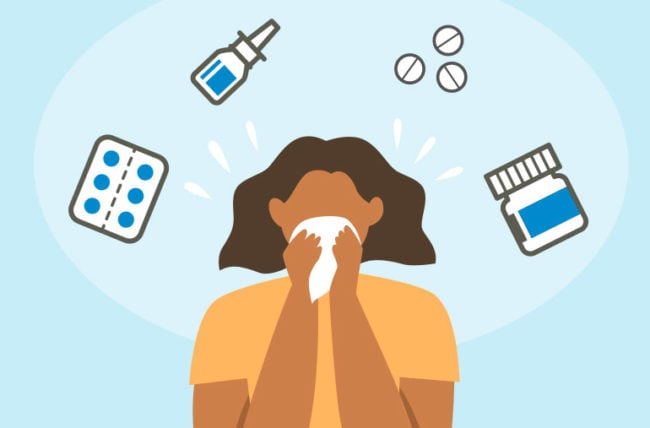 Achoo! Ahh, good old allergy season. Your eyes are watering, your nose is running and your whole face feels itchy. Now, you’re standing in the allergy medication aisle at your local pharmacy, and you’re feeling totally overwhelmed. Which of the many options is the best choice for you?!

Allergist Mark Aronica, MD, to the rescue. He explains the differences between the various kinds of over-the-counter allergy medications and how to decide which one (or more) is right for you.

There are two categories of over-the-counter medications commonly used to treat allergies: antihistamines and decongestants.

Dr. Aronica breaks down what they are, what each of them does, how often you can take them and more.

What is an antihistamine?

To understand antihistamines, it’s good to first know what histamine is. This important chemical plays a part in regulating many of your body’s physiologic functions. It’s also involved in local immune responses.

“Histamine is stored in immune cells called mast cells,” Dr. Aronica explains. “When your body encounters something you’re allergic to (known as an allergen), these mast cells are triggered to release their contents, which then cause allergy symptoms.”

Histamine is the main chemical responsible for the itching associated with allergies. It can also cause your blood vessels to be more permeable (leaky), which causes stuffiness. Antihistamines, then, are medications that block some of the effects of histamine.

Allergists recommend long-acting, non-sedating antihistamines — ones that won’t make you sleepy — for everyday use. Though you may know them by their brand names, the generic versions tackle the same problems:

Diphenhydramine, commonly known as Benadryl®, is also an antihistamine, but it isn’t recommended for everyday allergies. It’s short-acting and very sedating, which can impact your day-to-day work and your ability to operate machinery (like your car).

Zyrtec vs. Allegra vs. Claritin: What kind of antihistamine to take

With three types of antihistamines all claiming to do the trick, which should you choose? To some extent, it’s all about figuring out which medication your body reacts to best.

“They all do the same job of blocking the same receptor,” Dr. Aronica notes, “but some patients say one medication seems to work better for them. And in that case, that’s the medicine you should use.”

The key difference among the three is their capacity to make you sleepy. They’re all labeled “non-drowsy” (non-sedating), but cetirizine has the highest chance of drowsiness.

“Cetirizine (Zyrtec) has a little bit higher risk of sedation than the other two, followed by loratadine (Claritin),” Dr. Aronica explains. “Fexofenadine (Allegra) is the only long-acting, non-sedating antihistamine approved for airline pilots because it’s the least sedating of the three.”

Here’s another thing to consider: Although it’s most likely to cause drowsiness, cetirizine also has the fastest onset of action — in other words, it starts working the quickest.

What is a decongestant?

Decongestants do exactly what their name indicates: They help clear up the congestion (stuffiness) that allergies cause. “Decongestants constrict the blood vessels in the nose, which opens up the airway for some patients,” Dr. Aronica explains.

Products containing pseudoephedrine are typically regulated by law. In many states, you have to show your driver’s license to purchase them.

How often can you take allergy medicine?

Good news for bad allergies: Antihistamines are OK for everyday use.

“Long-acting, non-sedating antihistamines can be used daily, and they’re generally very safe to use, even in the long-term,” Dr. Aronica says. In a pinch, you can take two in one day, but if you frequently feel like antihistamines don’t help your allergy symptoms, try another type or see your allergist for their input.

And don’t take a decongestant every day.

“Decongestants can be used on an as-needed basis to cover difficult days — but certainly for no longer than 10 to 14 days at a time,” Dr. Aronica warns. They have a caffeine-like effect on your body, so they come with a risk of side effects like increased heart rate and elevated blood pressure.

In other words, save the decongestants for your absolute worst allergy days.

Can you take two types of allergy pills together?

There isn’t a clear-cut answer to this question because it varies depending on the types of allergy pills. Dr. Aronica breaks down the dos and don’ts of allergy medication mixing.

What are the side effects of allergy medicines?

We’ve already addressed some of the possible side effects of allergy medicines, but they bear repeating.

Of the three antihistamines, cetirizine (Zyrtec) is most likely to make you drowsy (3%–8% above placebo in most studies), with loratadine (Claritin) in second (2%–4%). If you want to be sure your allergy medication won’t impair your everyday functioning, take it at night before you go to bed — or take fexofenadine (Allegra) (1%–3%), which is the least likely to make you drowsy.

And you shouldn’t take decongestants (like Sudafed or any allergy medication ending in “-D”) for more than a week or two in a row, or you put yourself at risk for heart issues.

Nasal sprays are one of the best and only ways to actually try to prevent seasonal allergies, and you can use them along with your daily antihistamine. But nasal sprays work so well that you may find that you don’t even need the antihistamines or decongestants!

There are two classes of nasal sprays for allergies: over-the-counter nasal steroid sprays like fluticasone and betamethasone, and prescription antihistamine nose sprays like azelastine and olopatadine.

“Nasal sprays really are the best medical therapies we have for managing allergic rhinitis,” Dr. Aronica says. “I tell my patients to start using nose spray at least two to three weeks before allergy season starts.”

Nasal Spray for Allergies: What to Know and How to Choose

Killer Sinus Infection? How to Tell If Yours Is Viral or Bacterial

Allergies Got You Fuzzy-Headed? Here’s Why + How to Cope 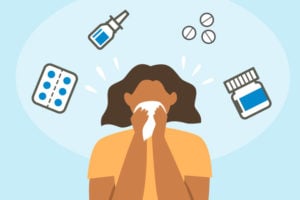 You’re standing in your pharmacy’s allergy medication aisle feeling totally overwhelmed. Which option is best?! An allergist explains the differences among OTC allergy medications and how to decide which is right for you.