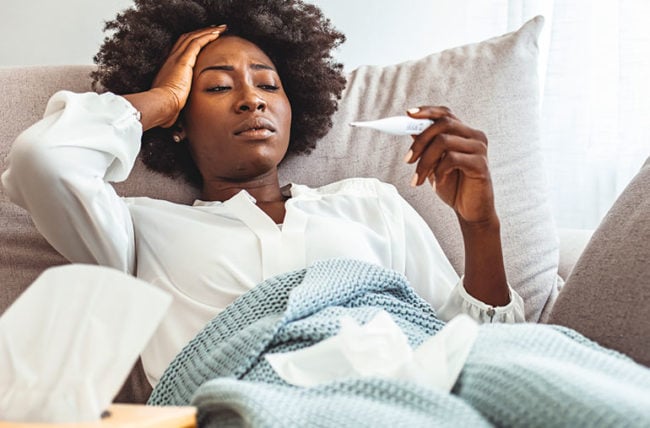 Fall brings many traditions like raking leaves, carving pumpkins, turning the clocks back and getting a flu shot. In fact, the latter might be the most important thing you do in the autumn.

The Northern Hemisphere flu season runs from October to May. Experts recommend getting a shot earlier rather than later in the season, so you have immunity built up before the peak flu time, which falls between December and February.

While we had a mild flu season last year because people were following COVID-19 protocols of masking and social distancing, influenza is nothing to sneeze at. Between 2010 and 2020, the CDC estimated that the flu resulted in anywhere between 12,000 and 52,000 deaths (and between 140,000 to 710,000 hospitalizations) annually.

Of course, plenty of other viruses are also always circulating during winter, including the common cold and respiratory infections. When you’re fighting off an illness, is getting a flu shot still the right thing to do — or is it better to wait?

Can you get a flu shot if you’re sick?

It depends. “The general guidance is it depends on how sick you are,” says Donald Ford, MD, MBA, Chairman of the Department of Family Medicine at Cleveland Clinic. “If you have a mild illness or a cold — what we normally think of a routine viral infection — there’s absolutely no reason why you can’t go ahead and get your flu shot, which is protection against a more severe viral infection.”

However, if you have a fever — which for adults is classified as a temperature over 100.4° F (38° C) — or are otherwise feeling unlike yourself, Dr. Ford recommends rescheduling for another day.

“The temperature is one marker,” he says. “If you’re sick enough that you’re staying home from work, if you’re having trouble keeping food down or staying hydrated, those would be all reasons to at least postpone it.”

Are there risks to getting a flu shot when you’re sick?

If you do get a flu shot when you’re sick, don’t worry — you won’t hurt yourself or make yourself sicker. However, it’s best to let your body focus on dealing with your existing illness.

“The immune system is preoccupied with fighting off what you’re already sick with,” says Dr. Ford. “And so you want your system in a prepared state. That way when you get the vaccine, you get a good response. And that bolsters your immunity to influenza that will hopefully last you through the whole flu season.”

Thankfully, likely not. “The immune response to any vaccination happens fairly quickly, typically within the first 24 to 48 hours,” says Dr. Ford. “So if you find yourself sick later on — it’s a funny thing, because people always say, ‘Well, I got sick from the flu shot.’ However, the illness was probably there to begin with, and you just hadn’t started feeling symptoms. As long as your symptoms are minimal, your body’s going to have a great chance to mount the immunity.”

Can a flu shot make you get sick?

It isn’t out of the ordinary to react to the flu shot, as it’s simply a sign that your immune system getting to work protecting you. Common responses include a sore arm, headache, nausea, muscle aches or a mild fever. “The vaccine itself is adapted every year,” Dr. Ford says. “So it’s very hard to predict, from one year to the next, if you’re going to have a mild reaction, no reaction or a more problematic reaction.

However, if you do get sick after getting a flu shot, it’s not because of the vaccine. “The only direct reactions to the shot are going to happen within the first 24 to 48 hours,” Dr. Ford affirms. “As mentioned before, if you get sick after that, people might think it’s related to getting the flu shot. But it’s just a coincidence.”

When should you cancel a flu shot if you’re sick?

Deciding to cancel a flu shot can be a game-time decision. “People can wait pretty close to when they’re getting it,” says Dr. Ford. “Most of us have experienced colds and wintertime viruses, and there’s usually an arc to them. You usually know when you’re starting to get better. Typically, they only last a few days, sometimes up to a week.”

The key is paying close attention to your symptoms — and determining whether you’re on the upswing or downswing of that arc. “If you’re getting better and your flu shot is scheduled for the next day, you’re probably fine,” Dr. Ford says. “If you’re still feeling bad or getting worse, then that might be the time to at least check with your doctor about whether you should proceed.”

Erring on the side of caution and postponing your appointment until you feel better is never a bad idea, however. “Flu shots are widely available in doctor’s offices,” Dr. Ford says. “They’re in all the pharmacies. If you’re not sure if you should go ahead and get it, it really isn’t a big deal if you delay it by a day or two.”

How to Stop a Virus From Spreading

Flu vs. COVID-19: Can You Tell the Difference?

4 Biggest Myths About Your COPD — and How to Cope

Why Asthma Puts You at Greater Risk This Flu Season

Can the Flu Shot Give You the Flu? 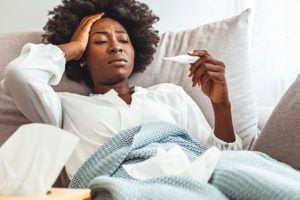 Is Getting a Flu Shot While Sick Risky?

If you’re not feeling good, is it safe to get a flu shot? An expert shares tips on when you should reschedule your appointment, and if there are risks you should know.