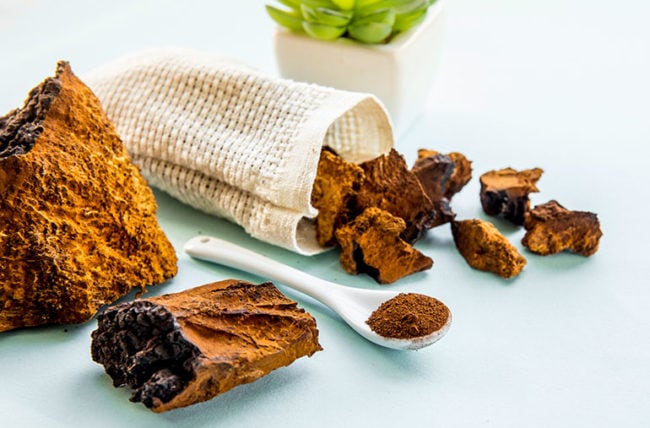 Sure, you’ve heard of portobello and shiitake mushrooms. But have you heard of chaga mushrooms?

Typically found in Siberia, the fungi have been used throughout history to boost immunity thanks to it being full of antioxidants.

So where can you find chaga mushrooms, how do you use them and what kind of benefits will you get?

What are chaga mushrooms?

Chaga mushrooms, which tend to grow on birch trees in cold climates, have a rocklike appearance. They don’t taste like traditional mushrooms. Instead, they have a bitter, yet vanilla taste. They’re also high in fiber and low in calories.

“It’s not like a traditional mushroom you would see in the grocery stores,” says Czerwony. So, you may need to head to a specialty store or a health food store or order it online.

You’ll find most versions of chaga mushrooms in tea, where it has been ground into a powder, though, it has become a popular ingredient in skincare products and is available as a supplement, too.

More research is needed to fully understand the impact of chaga mushrooms, but here’s what we know so far.

High in antioxidants, chaga mushrooms have been found to help fight inflammation.

“By having these antioxidants, chaga mushrooms decrease inflammation in our gut, which can cause problems like irritable bowel syndrome,” says Czerwony.

A study shows that chaga mushrooms can not only help reduce inflammation, but can also fight harmful bacteria.

Many studies show the potential for chaga mushrooms to slow the growth of cancer cells.

“One study said that using the chaga supplement resulted in a 60% reduction in tumor size,” says Czerwony.

Other research shows it helped prevent the growth of cancer cells in the liver.

“This is really exciting news for those who have liver cancer as a viable treatment, perhaps in the future,” she says.

Similar results have been seen in lung, breast, prostate and colon cancers, but more research is needed.

Several studies show the potential — as much as a 31% decrease in blood sugar levels — but more research, especially on humans, is also needed.

“Using chaga mushrooms could be beneficial for those individuals to help reduce their blood sugar,” says Czerwony.

With its high amounts of antioxidants, chaga mushrooms may also help lower cholesterol, which can reduce your risk of heart disease.

Side effects of chaga mushrooms

As with all supplements or vitamins, Czerwony advises talking to your doctor before adding anything new.

If you do have Type 2 diabetes, talk to your doctor first to make sure you’re keeping your blood sugar levels where they need to be.

Also, if you take any blood-thinning medication or have an upcoming surgery or procedure, talk to your doctor first, as chaga mushrooms contain a protein that prevents blood clotting.

And since supplements aren’t regulated by the U.S. Food and Drug Administration (FDA), Czerwony also suggests doing your homework before buying chaga mushrooms.

“You could be getting a mixed bag of potency with each dose,” she says. “You may use a tea one time and have no side effects. But the very next time, you may have something that’s higher potency because of the way that it was grown or processed. And then you could get some of the side effects.”

But if you’ve done your research, talked to your doctor and want to give chaga mushrooms a try, go for it.

“You have to be educated and you got to be careful with some things because it can do more harm than good,” says Czerwony.

The Health Benefits of Forbidden Rice 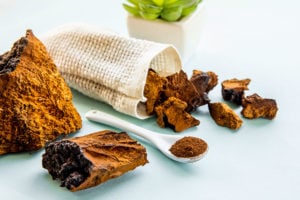 Not your typical-tasting fungi, chaga mushrooms boast a bitter, but vanilla flavor, and may help reduce inflammation, and lower blood sugar and cholesterol.