If you’re not planning on starting or growing your family right now, you probably know there are dozens of birth control options on the market.

There are in-the-moment devices like condoms and diaphragms. Maintenance options like the pill or shot. Or more permanent surgical options like sterilization by laparoscopy or vasectomy.

Somewhere in between the medications you take on the regular and sterilization surgery is a line of birth control options called LARCs — short for long-acting, reversible contraception. They include implantable devices like Nexplanon® (a matchstick-sized device that is implanted in your arm) and intrauterine devices (IUDs).

IUDs are a “set it and forget it” approach to contraception that many people find appealing for long-lasting, effective and reversible birth control.

There are several options for IUDs. Most of them release hormones to signal changes in your body that keep sperm from setting up shop and fertilizing an egg.

But one IUD, which goes by the brand name ParaGuard® in the United States, uses copper instead of hormones, and it’s getting a lot of attention these days.

We talked with OB/GYN Emily Freeman, DO, about the copper IUD and why you may want to consider it.

What is the copper IUD?

IUDs have become the most popular reversible birth control in the world, according to the National Center for Health Research. They’re estimated to be the birth control of choice for more than 100 million people worldwide.

IUDs are small, T-shaped devices that a doctor places in your uterus to block conception. In hormonal IUDs, the device releases a synthetic version of the hormone progesterone to prevent pregnancy.

In the copper IUD, however, instead of releasing hormones, the device is wrapped in a copper wire. The copper triggers an immune response in your uterus that causes inflammation, which makes it difficult for sperm to survive.

Benefits of the copper IUD

IUDs are popular around the world because they have proven to be a safe and effective form of birth control.

“Some people prefer that ownership and control that comes with taking a birth control pill or using a contraception patch that you change each month,” Dr. Freeman says. “For people who don’t want to think about birth control day-to-day, IUDs are a popular choice.”

Dr. Freeman says IUDs, including the copper IUD, are more than 99% effective, making them some of the most reliable types of contraception available.

Compare that to the effectiveness of other common birth control options:

Because the copper IUD does not release hormones, it’s a good choice for people living with certain health conditions. Some people living with breast cancer, for example, may not want to use hormonal methods of contraception. Others simply prefer having a long-lasting option that doesn’t use hormones. Maybe they’ve tried hormonal birth control in the past and experienced side effects — like weight gain or mood swings — they want to avoid.

“The copper IUD gives you the long-lasting, no-maintenance effects of an IUD but without any hormones, which makes it very appealing to some people,” Dr. Freeman says.

The U.S. Food and Drug Administration (FDA) approves the copper IUD as effective for 10 years. Dr. Freeman says research has shown that it can last even longer, perhaps up to 12 years.

Hormonal IUDs also last several years, but none as long as the copper version. Other IUDs are approved to be used between three and seven years.

Once a copper IUD is placed, that’s it. It starts working immediately, and there’s nothing more for you to do except visit a doctor when it’s time to be removed or replaced.

“A healthcare provider places the IUD in an office. After that it requires no maintenance,” Dr. Freeman says. “A lot of people find it appealing that you don’t need to take a pill every day or remember to get your shot or have any kind of device on hand when you engage in sex.”

If you decide it’s baby time, your fertility will return very soon after your healthcare practitioner removes the IUD, Dr. Freeman says. (That is, for people and their partners who don’t have any other medical conditions that lower their chances of becoming pregnant.)

“Depending on where you are in your menstrual cycle, you can get pregnant pretty much immediately after removal of an IUD,” Dr. Freeman says.

6. Can be used as emergency contraception

If you’re worried about a potential pregnancy, your healthcare provider can place a copper IUD up to five days after unprotected sex to block conception.

Side effects and risks

Like other forms of birth control, the copper IUD may not be right for everyone.

Some people say that inserting and removing IUDs, including the copper IUD, can be uncomfortable or painful. You may experience cramping or light bleeding after either procedure. The discomfort is typically short-lasting and can usually be resolved with over-the-counter pain medication if necessary.

Some people experience heavier, longer or more painful periods when using a copper IUD. Hormonal IUDs, on the other hand, may have the opposite effect. For some people, hormonal IUDs can cause them to skip periods.

In rare cases, IUDs can become dislodged and slip out of your uterus. And, very rarely, an IUD could puncture your uterus.

Does not protect you from STIs

Remember, Dr. Freeman says, no IUD (or pill, patch, shot or surgery) will not protect you from sexually transmitted infections (STIs). Condoms provide the best protection from STIs, including HIV/AIDs, genital herpes, chlamydia and more.

Is a copper IUD right for you?

Copper IUDs can be used safely for most people who have a uterus — from teenagers through people experiencing menopause. They shouldn’t be used if you have a copper allergy or Wilson’s disease (a rare condition that causes copper to accumulate in the body). Otherwise, if you’re looking for a non-hormonal, long-lasting contraception, the copper IUD may be a good fit for you.

“Talk with your healthcare provider about your contraception options,” Dr. Freeman says. “They’ll be able to advise you on what may work best for you. If you’re unhappy with your current method, explain what’s going on. They can help you find an alternative.”

Does Taking Multiple Birth Control Pills at Once Work the Same as the Morning-After Pill?

Can Birth Control Cause Infertility?

Can Birth Control Cause Thyroid Problems?

6 Safe Ways To Stop Your Period 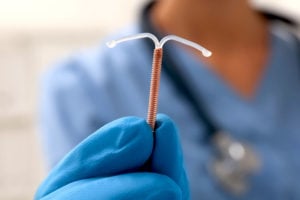 The copper IUD is safe and reliable for most people. It’s a “set it and forget it” non-hormonal option.