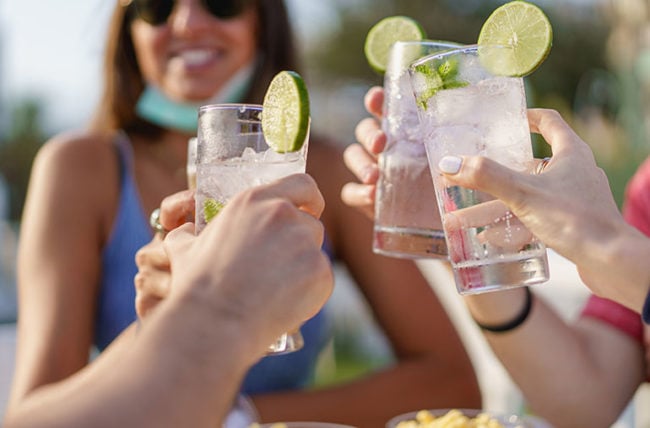 It’s a sweltering day and you’re soaking in the sun with friends and family. To help beat the heat, you reach in the cooler and fish out an ice-cold beer. One little twist — fssst! — and refreshment awaits.

While that might seem like the perfect thirst quencher at the moment, here’s a tip: Grab some water to stay properly hydrated, too.

The unforgiving effects of sizzling summer temperatures can be amplified when you mix in a little too much alcohol. To better understand the risks, we spoke with registered dietitian Julia Zumpano, RD.

Whenever you’re outside in the heat for prolonged periods — like an afternoon at the beach or hanging out at a family picnic — you’re at risk of dehydration. Consuming alcohol only heightens that risk.

Why, you ask? First of all, the consumption of beer, booze and wine reduces the release of an antidiuretic hormone (ADH) called vasopressin. This ADH works with your kidneys to keep your body fluids balanced.

At the same time, alcohol is a diuretic — which means more urinating and loss of fluid. (In truth, this factor can lead to dehydration even without the heat, notes Zumpano.)

Now, add in increased sweating from the hot sun, and it’s a recipe for dehydration disaster.

(One more tidbit: Caffeine — whether via coffee, soda or some sort of tasty mixer for liquor — can heighten your dehydration risk even more. So, add that to the list of factors working against you.)

Dehydration can also compound certain aspects of intoxication. If you’re dehydrated, you can become confused and have trouble with your coordination — symptoms very similar to being intoxicated.

A false sense of hydration

“If you’re drinking a lot of beer or alcoholic seltzer, it can feel like you’re taking in a lot of liquid and staying hydrated,” says Zumpano. “But the alcohol offsets that because of the dehydrating factor.”

Ditto for drinking mixed drinks that contain cola, tonic, juice or another liquid. It might feel like you’re staying hydrated because they go down smoother than drinking spirits on the rocks, but the alcohol is still dehydrating you.

The issue of feeling full

Drinks can pack many calories and carbs into a single serving — and that brings complications.

“If you’re drinking high sugar, high caloric beverages, they can be very filling,” says Zumpano. “And if you’re feeling full, you might not eat any food which can otherwise help absorb some of the alcohol.”

Liquor vs. beer: Is one worse in the heat?

Given that alcohol content is usually higher in spirits (aka liquor) than your average beer, it seems logical to assume drinking beer instead of mixed drinks might help you avoid dehydration.

The reality, however, is a little more complex, says Zumpano.

“If you’re consuming liquor at a volume equivalent to the volume of beer, like 12 ounces of margaritas compared to 12 ounces of an average beer, you will get drunk a lot quicker,” she says.

But if you’re drinking what’s considered an “alcoholic drink equivalent,” there’s not much of a difference because your alcohol intake is the same.

Let’s put it another way: One alcoholic drink equivalent contains around 14 grams of pure alcohol, according to the National Institute of Health. That’s the alcohol within what’s considered a standard drink.

By those measurements, an average 12-ounce can of beer contains the same amount of alcohol as a 5-ounce glass of wine or a typical shot of distilled spirits like rum, vodka, gin or whiskey.

One thing to keep an eye on, though, is the alcoholic content of your beer. Major beer brands generally run between 4% and 5% alcohol per 12-ounce can or bottle. However, certain styles of craft beer are as much as 9% alcohol per the same volume.

“In other words, one can of your favorite local IPA delivers almost twice the amount of alcohol to your system as a regular beer,” says Zumpano. “So not all beers hit the same. It’s something to be aware of.”

So, what can you do to avoid dehydration troubles when you’re sipping your favorite boozy beverage by the pool? Follow this formula.

“To counteract the dehydration risk of alcohol, drink 8 to 12 ounces of water for every alcoholic drink,” advises Zumpano. “It slows your alcohol intake, keeps you hydrated and can mitigate negative hangover effects.”

She suggests keeping a reusable water bottle handy so you can grab sips between beers or margaritas and refill it as the day goes on. Another option is to buy 8-ounce bottles of water and alternate them with your adult beverages.

(Pro tip: If H2O isn’t your thing, try infusing your water with fruit to make it more flavorful.)

“It’s also important to know what your trigger for over-consumption is,” adds Zumpano. “If you’re triggered by over-consuming beer or alcoholic seltzer, you want to be mindful of that. Try to switch to a drink you have better control of … and definitely keep a water bottle handy.”

What To Eat If You’ve Been Diagnosed With Prediabetes

How To Avoid Dehydration During Hot Weather

Drink Up: Dehydration is an Often Overlooked Health Risk for Seniors

What Should You Eat When You’re Hungover? 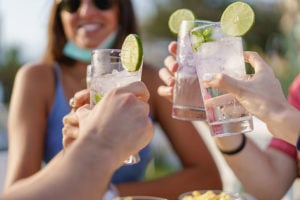 The Risks of Mixing Alcohol and Summer Heat – Cleveland Clinic

A cold beer or cool cocktail on a hot summer day may seem like a refreshing thirst quencher! But dehydration risks lurk when you combine heat and alcohol.