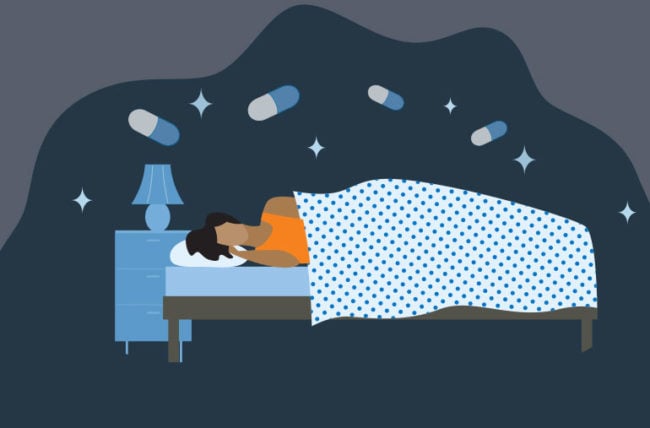 When you’re unable to sleep, you have many potential options to induce snoozing: drinking tea or warm milk, meditation or doing deep breathing exercises.

In recent years, many people have turned to melatonin — a naturally secreted hormone that’s also sold as an over-the-counter dietary supplement — to bring on ZZZs.

A National Center for Health Statistics report found the number of adults taking melatonin more than doubled between 2007 and 2012.

As a supplement, melatonin is associated with helping you get to sleep — and stay asleep. However, many people who take melatonin also report having vivid or bad dreams, a side effect that may be concerning.

We spoke with behavioral sleep medicine psychologist Michelle Drerup, PsyD, about how melatonin affects your body and what side effects to look for.

Dubbed the “sleep hormone,” melatonin functions as both a turn-down service and an internal alarm clock. When your melatonin levels increase, you start to feel tired and more chilled out. Decreasing melatonin levels are a signal that it’s time to rise and shine. “Melatonin helps your body know when it’s time to sleep and wake up,” says Dr. Drerup.

Melatonin is synthesized from serotonin, a mood-regulating neurotransmitter associated with happy feelings. This synthesis happens in your pineal gland, a small, oblong-shaped gland located in your brain. Within the pineal gland, melatonin production fluctuates depending on the time of day.

“Darkness prompts the pineal gland to start producing melatonin, while light causes that production to stop,” says Dr. Drerup. “As a result, melatonin helps regulate one’s circadian rhythm and synchronize our sleep-wake cycle with night and day.” That’s why you start to feel sleepy as soon as it gets dark — or find yourself drowsy in afternoons during winter when the sun sets earlier.

In an ideal world, melatonin levels would sync up with the presence of natural light. However, melatonin levels can decrease due to factors such as stress, smoking and shift work that disrupt your sleep patterns. If you are in the habit of scrolling through your phone or tablet at night, the glow produced by your screen can also cause melatonin to drop. A lack of exposure to natural light during the day is also associated with lower melatonin levels.

“Timing of melatonin onset is key to help sleep,” Dr. Drerup says. “Most people’s bodies produce enough melatonin for sleep on their own.” In fact, research has shown adults with circadian rhythm sleep disorders, including delayed sleep-wake phase disorder and jet lag, benefit most from more melatonin.

Does melatonin cause bad or vivid dreams?

In general, you might have more vivid dreams if you’re anxious or stressed. Certain sleep disorders, such as obstructive sleep apnea, and taking medications such as beta blockers and antihistamines, can also lead to an increase in vivid dreams and/or nightmares.

However, according to Dr. Drerup, it’s unclear if taking extra melatonin before going to bed causes bad or vivid dreams. “There’s no conclusive evidence as to how exactly your dreams are affected by taking melatonin supplements,” she says.

Reasons you might have vivid dreams after taking melatonin

If you are having particularly vivid or bad dreams after taking melatonin, it may be your body’s natural response to falling into a deeper, more restful sleep. Studies have found that melatonin can increase REM sleep, the sleep cycle known for causing vivid dreams. “If you are spending more time in the stage of sleep where vivid dreams are most likely to occur, this may naturally lead to increases in bad/vivid dreams,” says Dr. Drerup.

When you’re sleeping, melatonin also releases vasotocin, a protein that regulates REM sleep, she adds. “Increased amounts of melatonin may lead to higher levels of vasotocin — therefore more REM sleep and potentially vivid dreams.” Scientists are also exploring the links between melatonin and memory. A 2020 study found that after melatonin broke down in the body, one of the resulting molecules helped mice improve their long-term memory.

What are the side effects of taking melatonin?

Dose-wise, Dr. Drerup suggests you take between 1 to 3 milligrams of melatonin per night. “Melatonin is generally safe for most people, but too high of a dose can lead to unpleasant side effects.”

Common side effects from taking melatonin include:

Less common side effects from taking melatonin include:

The long-term effects of taking melatonin are also a question mark. “Minimal research exists on using melatonin beyond a few months,” says Dr. Drerup. “In general, melatonin usage has only been deemed safe for up to three months, even though many people take it for much longer.”

However, because melatonin is sold as a dietary supplement, it isn’t regulated by the FDA. This means what’s marketed as melatonin could be something far different. A 2017 study found the actual melatonin content in 71% of supplements didn’t match the amount advertised on the label. Researchers found supplements contained fillers, preservatives or even serotonin — the latter of which can be harmful in higher doses.

And while melatonin is easily available over the counter, Dr. Drerup recommends talking to your doctor before starting to take it, just as you would any other supplement. “It’s best to check especially if you have any health conditions, and also so your doctor can review any potential interactions with other medications/supplements.”

Are Sleeping Pills Bad for You?

The Truth About Melatonin Addiction

Can Melatonin Cause Headaches?

How To Fall Asleep Fast

Stress Dreams: Why Do We Have Them ― and How to Stop? 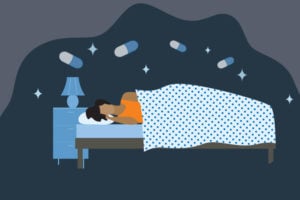 Can Melatonin Cause Bad Dreams? What Experts Say

This popular sleep aid helps people fall into a deeper, more restful sleep. But does it also cause bad or vivid dreams?