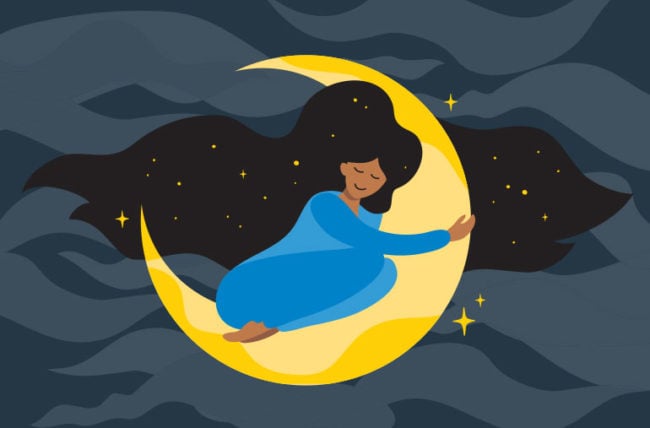 Imagine this. You’re enjoying a deep, restful snooze when suddenly you startle awake. However, it’s not from noise outside, but a vivid dream.

That’s not necessarily out of the ordinary. But you might wonder why your dreams are so realistic. And what does it mean when you dream about someone? What do falling dreams mean? What about recurring dreams?

Psychologists such as Sigmund Freud and Carl Jung developed theories to explain what dreams mean. “Freud thought dreams are repressed content, ideas or themes,” says behavioral sleep medicine expert Michelle Drerup, PsyD, DBSM. “And Jungian theory came out of Freud’s ideas and has this idea of collective unconscious. It’s something that you’re carrying from your ancestors.”

But from a medical perspective, dream interpretation is still a mystery. “There’s no real consistent, scientifically proven theory linking specific content back to what a dream means,” Dr. Drerup notes.

Dreams themselves are a little less mysterious. “Dreams are mental imagery or activity that occur when you sleep,” explains Dr. Drerup. You can dream at any stage of sleep, but your most vivid dreams typically occur in rapid eye movement sleep, or REM sleep. That’s the period of sleep when your brain is highly active, your eyes move rapidly behind your closed eyes and you have temporary loss of muscle tone.

“In REM sleep, we have less autonomic stability,” says Dr. Drerup. “Our heart rate increases. We don’t have the kind of steady, calm respiration that we do during other stages of non-REM sleep.”

Researchers find it challenging to analyze dreams because we often don’t remember them. “Even if you’re having a sleep study, it’s not like we can look in your brain and see what’s happening during a dream,” says Dr. Drerup. “That’s part of the reason why they’re still kind of mysterious — they’re difficult to study.”

Why do we dream?

Doctors have several working theories as to why we dream. For starters, Dr. Drerup says you also tend to dream more in REM sleep. Additionally, dreaming during this stage is associated with “consolidation of memories,” she adds.

“That dreaming may represent important cognitive functioning. Brain activity that occurs when we’re dreaming is similar to the memory processing brain activity we experience when we’re awake.”

When you’re experiencing more stress or anxiety, you tend to dream more, too. The types of dreams you have also change. Dr. Drerup says that nightmares or stressful dreams — for example, about being chased or being in a frightening situation — are also common when you’re stressed. “That’s one of the theories of why we dream,” she says. “Our dreams might help us process and manage our emotions.”

Interestingly enough, Dr. Drerup notes that researchers have found that people living in certain places might have similar nighttime visions, although they aren’t quite sure why. “There seems to be some cultural influence on dreams,” she explains. “For example, the same type of dream might be more common in Germany.”

What do dreams mean?

Determining what dreams mean is a big question, one that doctors, researchers and scientists are still trying to answer. But Dr. Drerup stresses that dream interpretation is subjective. “That’s always what I tell people — the meaning that you ascribe to the dream is going to be much more meaningful than anything I ascribe to the dream,” she says. “Because it’s probably something from your life that’s represented in that dream.”

As an example, Dr. Drerup notes that you might have the same dream as someone else, but yours will be more representative of what you’re personally experiencing. “For example, if someone recently lost their job, a certain dream about not being able to find their shoes might mean something very different to them versus someone who recently went through a divorce.”

Dreaming that you’re pregnant — in other words, involved with a new life — is also subjective. This could occur maybe when you’re trying to get pregnant or if you were pregnant and had a miscarriage. Or maybe not. “It’s much more of what this dream means to you. Your dream of pregnancy could be much more about, ‘I’m starting a new career.’ A new life, in a sense. The dream could mean a whole lot of different things.”

Although experiences you have in a dream might be based on real-life events, that doesn’t mean your dreams are always realistic. “A person might be distorted in the dream, or in a situation or place where they wouldn’t normally be,” notes Dr. Drerup. “What does that mean? Your guess is as good as mine.”

However, sometimes even the strangest dreams have logical explanations. Dreams about your teeth falling out could be happening because you’re grinding your teeth in your sleep, a condition called bruxism. “This dream is more a sign of psychological stress,” says Dr. Drerup.

Nightmares can be terrifying and have lingering effects even when you’re awake. “With nightmares, especially recurring nightmares, it can feel like you’re playing out a story,” says Dr. Drerup. “People often say it’s like the same movie’s playing.”

Talking about a nightmare like you would a movie you’ve seen can bring about unexpected consequences. “If you have a nightmare, you’ll tell everybody about it because it was so weird, right?” ventures Dr. Drerup. “But rehearsing that nightmare over and over again means your neural pathways are getting reinforced. It’s like you’re developing a memory of that nightmare. Then, it’s more likely the dream will reoccur.”

Dr. Drerup says nightmares are commonly associated with a variety of other conditions and events as well, such as:

For someone living with post-traumatic stress disorder (PTSD), nightmares are often a component of re-experiencing or re-living their trauma.

Overindulging a bit too much can exacerbate nightmares.

High stress levels can lead to more dreams and nightmares. According to Dr. Drerup, this is likely because the stress is kicking the emotional processing that occurs during dreaming into overdrive.

Dr. Drerup says psychological disorders such as depression and anxiety are associated more frequently with nightmares.

Withdrawing from certain medications can also cause more nightmares. “Antidepressants suppress REM sleep, and decrease the amount of REM sleep that we have,” explains Dr. Drerup. “When you go off of an antidepressant, you tend to have REM rebound.”

In other words, you experience more REM sleep, which then makes it more likely that you’re spending time where dreaming happens. “People will often have an increase in dreams or nightmares when they discontinue antidepressants,” she adds.

People who get help for untreated sleep apnea often have “a high level of dream recall and potentially nightmares as well,” says Dr. Drerup. “If you have sleep apnea, you’re having fragmented disrupted sleep.” Getting better quality sleep means you’re going into REM sleep — and staying there, “instead of having these brief arousals that are keeping you out of that stage of sleep,” she notes. “You’ll have that REM rebound as well.”

Sleep disorders can affect all aspects of slumber, including dreaming.

For some people, nightmares are more than just a temporary scare. They have a sleep disorder called nightmare disorder.

“With nightmare disorder, you have these really distressing nightmares that are repetitive,” says Dr. Drerup. “They occur frequently. They wake you from sleep. You can’t get back to sleep afterwards. You have a panicked feeling upon awakening and take a while to reorient.”

“This treatment has some really significant research backing behind it,” says Dr. Drerup. “You work with your therapist to rewrite the nightmare to contain less disturbing content, and then practice the new dream imagery during the daytime.”

“It’s like guided imagery of that new content to make the dream less distressing,” she continues. “The image you’re practicing can replace or decrease the frequency of that disruptive nightmare, or completely eliminate it altogether.”

A sleep disorder called REM sleep behavior disorder can also cause abnormal dreaming. “During REM sleep, your muscles are typically paralyzed, so you don’t act out dreams,” says Dr. Drerup. “From an evolutionary standpoint, it happened because it was more protective for us to not be able to move when dreaming.”

People living with REM sleep behavior disorder, however, actually aren’t paralyzed — meaning they can move in their sleep while dreaming. Dr. Drerup says it’s not always an issue, but can be in certain situations.

“It’s often not as disruptive to you unless you’re punching someone in your dream, and then punch your spouse or the nightstand and injure yourself,” she says. “There are safety concerns with this.”

Is it normal not to dream?

Dr. Drerup says there is a rare condition called Charcot-Wilbrand syndrome where people don’t dream at all. This dream loss occurs following focal brain damage (typically a stroke) that’s specifically characterized by you losing the ability to mentally recall (or “revisualize”) images.

Most people do dream, though — you just don’t recall them. “People will say, ‘I don’t dream at all, because I don’t sleep well.’ And that’s not necessarily the case,” explains Dr. Drerup. “Just because you don’t have dream content doesn’t mean that you’re not dreaming. We usually don’t remember our dreams unless we’re awoken from them.”

At the end of the day, however, dream interpretation is still a big mystery yet to be solved. But if you’re trying to puzzle out what your subconscious is trying to tell you, look to your day-to-day life for clues.

“We can have really good recall of a dream when we wake up, and then it’ll fade away,” says Dr. Drerup. “And then you think back, ‘I know I had a weird dream, but I don’t remember it.’ So, if you want to have more awareness, jot details down as soon as you wake up — what was the dream, identify if there’s patterns.”

“Once again, it’s much more what meaning you ascribe to dreams,” she adds. “That’s key. That’s more relevant than dream interpretation books that list specific interpretations.”

Talking In Your Sleep? Here’s What That Could Mean

Why Do We Dream?

Why Am I Having Weird Dreams During the Pandemic?

What You Should Know About the Relationship Between Oversleeping and Depression

What Are Lucid Dreams and How Can You Have Them?

What Do Dreams Mean?

What dreams mean is still a scientific mystery, but here’s what we do know about nightmares, sleep disorders and why we dream.