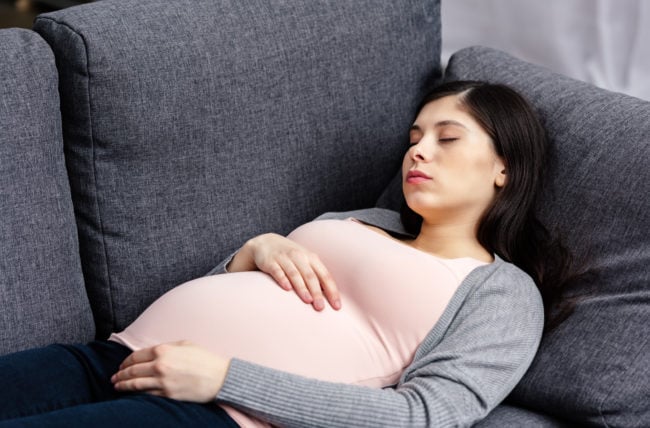 Since the moment you saw those two, bliss-inducing pink lines on your pregnancy test, you’ve been painstakingly conscientious to do nothing that would harm your baby.

You’ve kicked your latte habit. You take your prenatal every evening like clockwork. And you don’t change the kitty litter. (Heck, who are we kidding? Someone else can do that one permanently!)

But then ― without even meaning to ― you woke up and had a groggy (and panicked!) realization: You were sleeping on your back. After all, every single pregnancy book you’ve read has advised against it. But how bad is it really?

The why behind the warnings

As your uterus gets larger (usually by the time you’re 20 weeks ― that’s five months ― along), it’s big enough that it lies on top of your inferior vena cava, if you’re lying on your back, explains Ob/Gyn Salena Zanotti, MD.

So what can this actually do?

Researchers in New Zealand found that there was a potential increased risk of stillbirth for those who slept the entire night on their back. But Dr. Zanotti says these and similar studies were small, not randomized and shouldn’t be taken as definite proof.

For instance, the studies looked at those who spent all night on their backs and never got up to go to the bathroom. “But most people don’t sleep the entire night without getting up at that point in pregnancy ― even if they wish they could,” Dr. Zanotti says.

Plus, she adds, there are many factors involved in pregnancy, so it’s really hard to say one thing causes stillbirths or other problems. “A lot of people who are back sleepers may be snorers or have sleep apnea. That’s where these studies are faulted because you can’t weed out all those things.”

Quantifying it is the tricky part

Dr. Zanotti reassures expectant mothers not to stress if they accidentally find themselves on their backs for a brief spell.

“We do know that short periods of time ― even if you were on your back for an hour or two ― probably do no harm to your child,” she says. “The hard part is we can’t really quantify exactly how much is ‘safe time’ and what it really does.”

When they’re far along in their pregnancies, they’ll get light-headed or not feel right if they’re on their backs for long periods of time, Dr. Zanotti notes.

“Often times, your body is going to tell you something isn’t right and that will make you move around,” she says. “So if you’re on your back and having a little trouble breathing or maybe your heart is beating faster, it’s your body’s way of saying you need to roll over on your side. Listen to your body.”

The best advice if you’re expecting

So what’s an already uncomfy expectant mother to do?  After 20 weeks of pregnancy, try not to spend the entire night on your back, Dr. Zanotti advises. She suggests putting a pillow between your back and the mattress as insurance. That way, even if you do roll over, you’re on a bit of a tilt.

“As long as you’re not flat on your back, you’re going to be fine,” she says. “Even if you can be on a 20- to 30-degree angle, that’s going to relieve any potential pressure on your inferior vena cava. I think most people, even if they were back sleepers, can be comfortable sleeping with just that bit of an angle.”

While it’s sensible to be cautious, Dr. Zanotti says it’s also important to comfort those who already have enough on their minds.

“I’ve had patients who’ve woken up on their back and they’re worried they’re going to cause their child brain damage. That has not been shown,” she says. “We don’t see a higher risk of autism or developmental disorders in those who’ve slept on their back for a little bit.”

And left side vs. right side?

Traditionally, Ob/Gyns have advised pregnant people to sleep on their left side. That’s because your inferior vena cava is on your right. “The thinking was that if you slept on your right side, you could potentially compress the blood flow,” Dr. Zanotti says.

But today, the evidence shows that if you’re truly on your side, you’re still going to get good blood flow. So most experts tell people it’s OK to sleep on either side.

“The left side’s ideal,” she says. “If you like your left side, absolutely wonderful. But if you’re a right-sided sleeper, you’re fine that way too.”

Surprising Relief for Your Stuffy Nose? Have Sex

How To Lose Weight After Pregnancy

5 Side Effects of Working Too Much

Why Do I Have Knee Pain at Night? 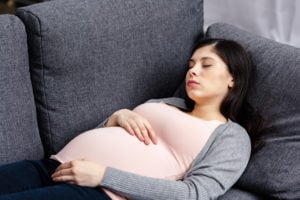 Exactly How Bad Is It to Sleep on Your Back When You’re Pregnant?

Sorry, moms-to-be! Sleeping on your back (all night long) is one more habit you’ll need to change while you’re expecting. Ob/Gyn Salena Zanotti, MD, explains why ― and how to get comfy instead.