When you drink red wine, does your face mirror that ruby glow? Or do your cheeks redden only when you’re drinking cocktails?

“Your face may flush from alcohol for two reasons: because of an enzyme deficiency or because of rosacea. Both are tied to your ethnicity,” explains dermatologist Alok Vij, MD.

Because alcohol is a cellular toxin, anyone who drinks excessively increases their risk for oral cancer and esophageal cancer.

“Alcohol most frequently passes through these sites,” explains Dr. Vij. “Toxicity and DNA damage can build up in cells and, eventually, a cancer can form.”

But recent studies report that those who get an alcohol flush because of an enzyme deficiency are also at heightened risk of digestive, liver and respiratory cancers.

They are more vulnerable to alcohol’s toxicity as it is processed and later eliminated in:

Is rosacea linked to cancer in any way?

“We don’t think of rosacea as a precancerous disease,” Dr. Vij says. “The biggest problems rosacea causes are a bulbous nose, like W.C. Fields had, and eye inflammation.”

(It was rosacea — not alcoholism — that made the storied comedian’s nose look large, red and bumpy, because of an overgrowth of the sebaceous glands, he adds.)

In addition, rosacea can make your eyes feel itchy, dry and chronically irritated. These eye symptoms can be managed with anti-inflammatory medication. “We typically prescribe oral antibiotics like doxycycline or minocycline, often at lower doses than are required to kill bacteria,” says Dr. Vij.

Are some types of alcohol more likely to cause flushing?

So if your face flushes, are specific kinds of alcohol to blame?

If you have rosacea and keep track of what happens when you drink, you’ll find your triggers, he says.

Can facial flushing be prevented?

If an alcohol flush makes you feel self-conscious when you drink, certain treatments can help, says Dr. Vij:

Because the medications and laser treatments are considered cosmetic, however, they are not covered by insurance.

“If flushing bothers you, and you know alcohol is a trigger, the easiest and most cost-effective solution is to avoid it,” says Dr. Vij.

6 Surprising Ways Alcohol Affects Your Health — Not Just Your Liver 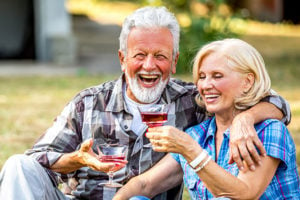 Facial Flushing: Should You Worry If Your Face Turns Red When You Drink?

Do you feel embarrassed when you drink because your face turns red? There are for two reasons alcohol can do this — and both are tied to your ethnicity.