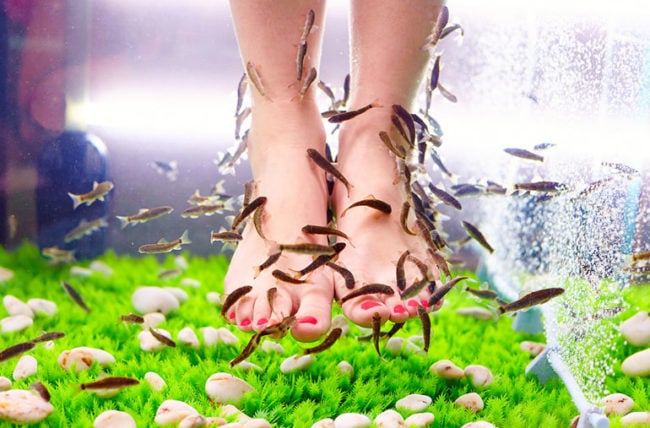 How badly do you want smoother, fresher-smelling feet? For the promise of glowing, baby-soft footsies, would you place them into a cool basin of pint-sized, flesh-eating fish?

Though not a new phenomenon, the “fish pedicure” is a growing trend in the spa world. But in terms of health and medical safety, this is a skin trend that you probably want to pass on.

Dermatologist Shilpi Khetarpal, MD, explains what the fish pedicure is and why you shouldn’t try this funky foot trend.

What is a fish pedicure?

Well, it’s kind of what it sounds like. The way it works is a patron places their feet in a water tub containing carp-like fish called Garra rufa (or “doctor fish”), which are native to the Middle East. In turn, the fish go to work snacking on the person’s dead skin cells.

Those favoring the treatment argue that the fish soften calluses, help lighten dark cuticles and increase circulation. However, experts say the health risks — both to humans and to the fish — outweigh any potential benefits. As a result, fish pedicures are banned in 10 U.S. states, Mexico and areas of Europe.

It’s important to note that sloughed skin isn’t usually on the menu for these fish, which prefer plankton and plant sources; they only eat human skin when they can’t find anything better.

The dangers and downsides of fish pedicures

While it may seem like a curious little trend, there are a number of dangers involved in having a fish pedicure. “Even though this trend may seem natural or interesting to some people, it poses significant risk,” says Dr. Khetarpal.

Here are five reasons she says you should avoid fish pedicures:

Cost constraints make it more likely that salon owners will use the same fish multiple times with different customers, which increases the risk of spreading infection.

“The Garra rufa are imported, purposely starved and then often shared by different patrons,” Dr. Khetarpal explains. “There’s no effective way to disinfect the tubs or the fish themselves. Many spas will simply reuse the fish.”

“This bacteria can cause pneumonia, bone and joint infection and bloodstream infections,” Dr. Khetarpal says. Another case report in 2017 found that this treatment may cause mycobacteriosis.

Generally, these fish nibble at dry, dead skin while leaving healthy skin and nails intact. But a woman in her 20s reported severe toenail injuries after a fish pedicure.

The scariest part? She didn’t feel any pain during the pedicure to warn her of injury; damage to her nail matrix wasn’t visible until the nails attempted to grow out – three to six months later.

In this case, the biting fish caused trauma that stopped nail plate production in multiple toenails. The woman was diagnosed with onychomadesis, a condition that causes nails to shed, which often results in nail loss.

“Even though the fish are not targeting the nail bed, they chew on the cuticle, which can affect the stem cells in the nail plate,” Dr. Khetarpal notes. “It’s a slow process, but often you see lifting of the nail.”

Here’s another twist. You may not even be sharing the tub with Garra rufa but rather another cheaper, more aggressive fish variety called Chin-Chin.

These Chinese fish look similar but they grow teeth. As a result, they can bite and draw blood. This further raises the risk of infection.

Besides all the risks to humans, this practice may be considered inhumane to the fish. The pedicure process requires starving the Garra rufa to make them feed off people’s dead skin.

According to the U.S. Fish and Wildlife Service, Garra rufa could pose a threat to native plant and animal life if released into the wild because these fish aren‘t native to the United States.

So, before you dive in, a more traditional, fish-free pedicure is probably the better, safer option.

What To Know About Mucus Fishing Syndrome

Is Cancer Treatment Affecting Your Skin and Nails?

Can Ultraviolet Nail Salon Lamps Give You Skin Cancer?

Is Psoriasis Damaging Your Nails?

6 Top Benefits of Vitamin A 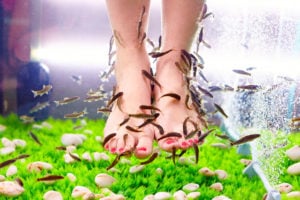 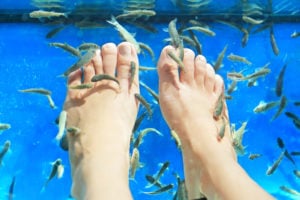 Fish Pedicures: This Trend Is More Than a Little ‘Fishy’

If you’ve heard about fish pedicures, maybe you’re wondering if there’s any benefits to this skin trend. While proponents of the fish pedicure claim it can clean off dead skin and keep your feet soft, the science behind it says otherwise.