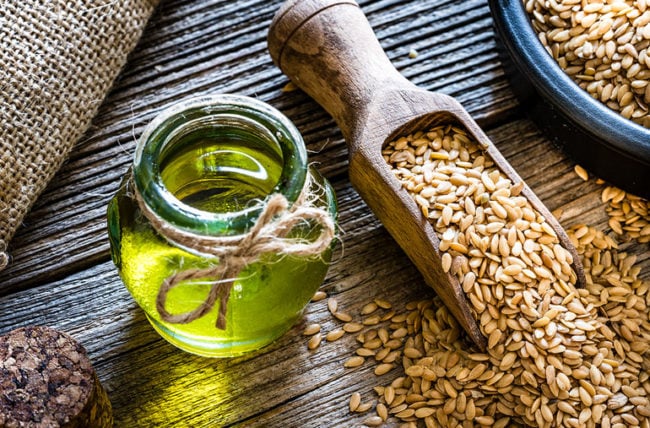 Flax is one of the world’s oldest crops. Archaeologists have found flax fibers dating back 30,000 years. “Originally, flax was used to make fabric for clothing and some other textiles,” says dietitian Devon Peart, MHSc, BASc, RD. “Now it’s also grown as a food crop.”

When it’s being used for non-food and industrial purposes, flax is sometimes referred to as linseed. In fact, linseed oil is an ingredient found in oil paints, wood finish or putty.

Flaxseed oil, however, is another story. A rich source of healthy fats, it offers multiple health benefits when you use it during meals.

What is flaxseed oil?

Flaxseed oil, which is available in liquid and capsule form, comes from the seed of the flax plant.

“It’s obtained by cold pressing ripened and dried fresh flax seeds,” explains Peart. “This releases the oil.” This method produces an oil with more health benefits. “Cold pressing retains the antioxidants that can be damaged by heating.”

But flaxseed and flaxseed oil do differ in several ways. For example, flaxseed is high in fiber. “There are properties of the flaxseed that you don’t get in the oil, like fiber,” Peart says. “The oil just contains 100% fat — but it is healthy fat.”

Although flaxseed oil is 100% fat, that doesn’t mean it’s unhealthy. First, the fat is unsaturated fat, the kind that’s good for heart health.

Omega-3 fats are associated with multiple health benefits. These include a reduced risk of:

Omega-3 fats are also associated with lowering cholesterol and may even improve your mood.

The kind of omega-3 fat in flaxseed oil is alpha-linolenic acid (APA), which is the fat you find in plants. In fish such as salmon, the omega-3 fatty acids are eicosapentaenoic acid (EPA) and docosahexaenoic acid (DHA).

“Pound for pound, flaxseed oil is the richest source of ALA, that plant-based omega-3 fatty acid,” Peart notes. “It’s a good choice for vegans or people who don’t want to eat fish.”

“This kind of cholesterol is associated with atherosclerosis — hardening of the arteries — which is a risk factor for heart disease,” Peart says. “The men also saw significantly lower LDL levels in as soon as four weeks of supplementing. That’s really fast.”

In addition, another 2015 study with older adults showed that flaxseed oil reduced LDL (or bad cholesterol) and boosted HDL (or good cholesterol).

Flaxseed oil is one of the richest plant sources of lignans. Those are antioxidant and anti-inflammatory compounds. “Chronic inflammation is linked to all kinds of health issues,” says Peart, including obesity, metabolic syndrome, Type 2 diabetes and heart disease. A 2018 meta-analysis of studies found a promising link between flaxseed oil and its ability to reduce the kind of stress that encourages inflammation.

Peart also notes an older, but important, 2013 Canadian study was the first to show an association between flaxseed consumption and a reduced breast cancer risk. That was due to the lignans found in flaxseed oil.

Scientists are also exploring whether lignans could lead to a reduced risk of heart disease and osteoporosis, although more research is needed.

In general, researchers have found promising links between flaxseed oil and reducing inflammation. A 2018 meta-analysis of studies looking at the effects of flaxseed oil on people living with metabolic syndrome — a collection of risk factors that increase your chance of developing heart disease, stroke and diabetes — found that supplementation with flaxseed oil had positive benefits.

How much flaxseed oil should you take?

Peart says it’s perfectly fine to take flaxseed oil every day, and adds that there’s no standard recommended dosage. However, she notes a “couple teaspoons to a tablespoon” of flaxseed oil (equivalent to one to three capsules) per day is a typical amount.

That amount will ensure you get the bulk of the recommended daily intake of the ALA omega-3 fat. “The daily ALA recommendation for women is about 1,100 milligrams, while for men, it’s about 1,600 milligrams,” Peart says. “A tablespoon of flaxseed oil provides about 730 to 1,095 usable milligrams of ALA.”

Flaxseed oil benefits aren’t necessarily different if you opt to take the supplement in pill or capsule form rather than straight oil.

Peart says, “It’s easier to store flaxseed oil when it’s in the capsule form. And for people who don’t want to eat it — such as, for example, adding the oil to salad dressing — you can have it in the capsules.”

As is the case with many supplements, too much flaxseed oil can upset your stomach. Taking large amounts of flaxseed oil can cause loose stools — meaning your poop is softer — and even diarrhea. Some people might also potentially have an allergic reaction.

Peart says you also shouldn’t use flaxseed oil for cooking because it has a low smoke point. That means it burns at low temperatures. “You don’t want to expose flaxseed oil to high heat,” she cautions. “When you heat the oil, you break down the fatty acids. And it also can form free radicals, which are harmful.”

Using fresh flaxseed oil is best, like in a salad dressing, sauce or dip, or added to a shake, smoothie or yogurt. But the oil form does have a shorter shelf life than seeds, so you need to store it in a cool, dark place.

“It can be kept in a pantry or the fridge,” Peart says. “However, don’t store it next to the stove because of the heat. Because it’s a fat, it can oxidize and can go rancid quickly.”

Is flaxseed oil a superfood?

Dietitians don’t have one single definition of a superfood — although, in general, these are low-calorie foods that are packed with nutrients. Using that description, flaxseed oil would certainly qualify. “After all, it’s associated with heart health, a strong immune system, reduced inflammation, and lowered cholesterol. It fits all of those criteria,” Peart emphasizes.

When you’re looking at the composition of your diet, however, Peart recommends eating multiple sources of omega-3 fats. In addition to flaxseed oil, you can eat fish like salmon, as well as chia seeds. “I wouldn’t make flaxseed oil your only source of omega-3 fats,” she says. “But I would add it to the rotation.”

How Omega-3 Foods Can Help You Be a Better Athlete

Healthy Eating With Arthritis: 3 Tips to Improve Your Symptoms

The Skinny on Unsaturated Fats: Why You Need Them and the Best Sources 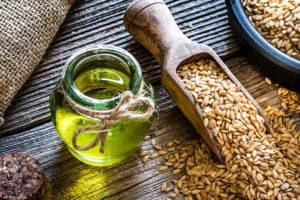 The Benefits of Flaxseed Oil

Flaxseed oil offers a variety of valuable health benefits. Learn why it’s good for you and how much is best to take per day.