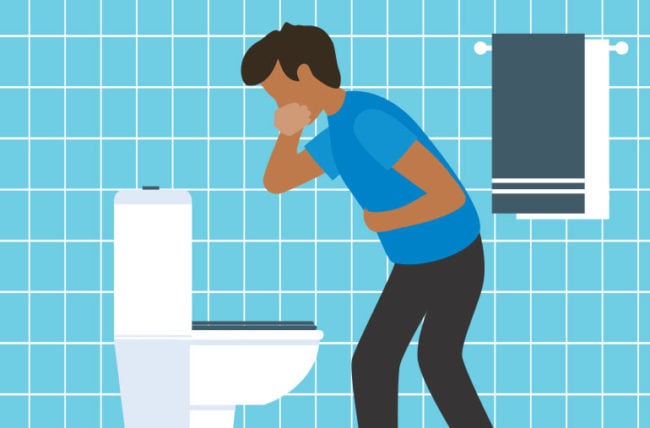 When your stomach is feeling off, you’re probably not overly focused on the reasons for your bathroom emergency. All you want is to feel better.

But figuring out whether you have food poisoning or the stomach flu can determine your best plan of action — and give you a clue as to how long you’re going to feel lousy.

Family medicine physician Donald Ford, MD, MBA, Chairman of the Department of Family Medicine at Cleveland Clinic, explains how you can tell the difference between symptoms of food poisoning and the stomach flu, and when you need to worry.

The stomach flu (which is also known as viral gastroenteritis) is very common. Like many viruses, it’s passed around by groups of people gathering together in close quarters.

“The classic environment where we see the stomach flu going around is a cruise ship,” says Dr. Ford. “People are in an enclosed structure and in very close contact with each other. In those circumstances, the virus is passed very easily.”

In contrast, food poisoning comes from food. Bacteria could grow in food that wasn’t cooked properly or in food that’s been sitting out too long without being refrigerated. Dr. Ford adds that some foods in general just might not agree with you, and would cause reactions similar to food poisoning.

The differences between food poisoning and the stomach flu

It can be very hard to distinguish between food poisoning and the stomach flu because the two conditions share multiple symptoms.

Diarrhea is the main side effect of both. This can be watery and sometimes even bloody. “Bloody diarrhea often happens when there’s a very rapid onset of diarrhea,” says Dr. Ford. “It disrupts the intestinal tract and causes a little bit of bleeding.” Vomiting and nausea are also common symptoms, while some people might develop fever and chills with both.

However, the biggest differences between the two are when your symptoms start after you’ve been exposed, and how long your symptoms last.

The stomach flu typically has about a 24 to 48 hour incubation period in your system and then starts causing symptoms. In contrast, food poisoning comes on quickly — typically about two to six hours after you’ve eaten spoiled food.

“Let’s say you sit down at a picnic and everybody eats the same food,” says Dr. Ford. “It’s very possible that a lot of people will get the same symptoms. Whereas, with a stomach bug, you may have been around somebody in the last day or two who had similar symptoms. It takes a couple of days for its onset.”

Food poisoning can also be slightly easier to identify because it emerges after a more recent event. “Most people don’t have any problem thinking back to what they’ve just eaten, and realize maybe that egg salad was sitting out for too long,” says Dr. Ford. “They can then trace their symptoms back to that.”

Food poisoning doesn’t just come on faster than the stomach flu — it also runs its course more quickly. Dr. Ford says viral gastroenteritis generally lingers for two days, although sometimes, it can last longer. In contrast, food poisoning “hopefully is going to be out of your system sooner than that,” Dr. Ford continues. “It tends to be very fairly brief. I like to think of it as your body is just trying to get rid of what it took in that’s not good for it.”

The stomach flu causes unpleasant symptoms like nausea, diarrhea and vomiting. “We tend to see a little bit more what we would call systemic effects, like fever and chills, with a viral gastroenteritis,” says Dr. Ford. “But that’s not 100% true across the board.”

It’s important to keep in mind that the stomach flu isn’t the same as influenza. Although viruses cause both, they’re very different. “Influenza is a respiratory illness and causes fever and chills, but also coughing, shortness of breath and upper respiratory symptoms,” explains Dr. Ford. “The stomach flu can also cause fever and chills. But, typically, you’ll experience nausea and especially diarrhea.”

Typical food poisoning symptoms include vomiting and diarrhea. At times, these can be severe. You can also occasionally get a fever with food poisoning.

How to recover from food poisoning and the stomach flu

The treatment for both food poisoning and the stomach flu is the same: rest and drink plenty of water.

“The biggest risk from either of these illnesses is dehydration,” says Dr. Ford. “When your body is trying to get rid of what’s in there, it’s going to throw out the good with the bad. It’s pushing out a lot of fluid along with the toxins that that are making you ill. You have to be super aggressive about replacing them.”

Having a fever can also make you dehydrated. “When your body temperature goes up, it’s a reaction to the presence of something that’s causing it distress,” notes Dr. Ford. “And that actually burns more fluid. Sometimes, if you’re sweating with a fever, you know you’re losing fluid. But at other times, you can’t even tell.”

When you get dehydrated, you’re also losing electrolytes from your body. Electrolytes are minerals found in your body, such as sodium, potassium and magnesium, which help you absorb fluids better.

“Replacing electrolytes is also helpful so your body can retain the water that you’re trying to drink,” says Dr. Ford, who recommends pairing electrolyte-rich drinks such as Pedialyte® or Gatorade® with plenty of H2O.

Both food poisoning and the stomach flu are what’s known as self-limited ailments. In other words, you’ll get better on your own as the conditions run their course.

“Very rarely do we need medication for either of these conditions,” says Dr. Ford. “The treatment is rest and hydration. Sometimes, people want to take pills or something else that’s going to help them better fast, which I certainly understand. But antibiotics may actually make these ailments worse. The medicines that we use for influenza are not going to work.”

That being said, there are times when you might need to see a doctor after a bout of food poisoning or the stomach flu. If you have a high fever, typically over 102 degrees Fahrenheit (38.33 degrees Celsius), you might want to get checked out.

“If other symptoms occur — like you’re overly drowsy, can’t get out of bed or can’t speak coherently — those are all signs potentially of dehydration,” says Dr. Ford. “If you’re still not feeling great after more than 48 hours, that’s also a concern. Sometimes, you can tell you’re getting better. However, if the symptoms haven’t let up — or certainly if they’re seeming worse by that time — it’s probably a good idea to at least make contact with the doctor’s office and talk through your symptoms.”

When you see a doctor, chances are they’ll ask you questions about what you’ve eaten or who you’ve seen lately. “Doctors often go through a fairly detailed history of what’s happened to you in the past few days to try to try to figure out whether you have food poisoning or the stomach flu,” says Dr. Ford. This detailed conversation is to help direct your treatment or identify what’s going on.

Prevention is also key for both ailments. If there’s a stomach bug going around, wash your hands. “That’s how it’s transmitted,” he continues. “People touch surfaces that the sick person has touched. They touch their mouth unintentionally and catch the virus.”

Food poisoning can also be prevented. If you’re at a big gathering or picnic where food has been sitting out in the sun, food poisoning can happen after even just a few hours. “If you’re planning a picnic, keep that cooler cool, and keep the food in the cooler as long as you can,” advises Dr. Ford. “The more it’s allowed to sit out in the sun in the hot weather and the humidity, the more the greater the likelihood that bacteria could develop.”

What Causes Staph Infections, and How Can You Avoid Them?

What to Do When Your Stomach Bug Won’t Go Away

10 Common Winter Illnesses: Are You Contagious? 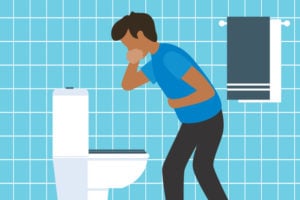 Food poisoning and the stomach flu share multiple symptoms, although the ailments have different causes and durations. Here’s how to tell the difference between the two.