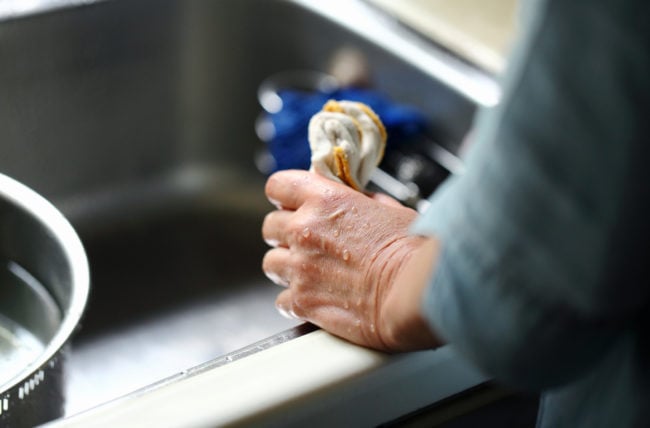 You wash your dishes after every use, but how often do you wash your kitchen towel? According to new research, probably not enough.

“Routinely, we don’t wash those towels as often as we do other apparel of daily use around the house,” says infectious disease expert Frank Esper, MD. “Usually those  towels  can  last  there  for  weeks,  if  not  even  longer.”

In a new study presented at the annual meeting of the American Society of Microbiology, researchers collected 100 kitchen towels after one month of use. Results show about half contained bacterial growth such as E. coli and staph.

The study suggests that bacteria found on multi-use kitchen towels from handling meat products could be a source of cross-contamination, which could lead to food poisoning.

Dr. Esper, who did not take part in the study, says bacteria can be hazardous in certain situations. However, these are the type of bacteria that you would expect to find around the house.

How to keep bacteria in check

Since the kitchen is the place where food is being prepared, it’s very important to keep harmful germs away from food.

And don’t forget to clean other parts of the kitchen ― like refrigerator door handles, microwave handles and sink faucets ― because these places are touched by many and are often touched before consuming food.

But don’t freak out too much!

Folks don’t need to obsess over their kitchen towels, he says, but it’s a good idea to keep them as clean as you can.

“It’s never going to be completely zero-bacteria at all,” he notes. But we should aim for “just  a  moderate  amount  of  bacteria,  making  sure  that  we  change  the  towels,  which  was  the  whole  subject  of  the study,  but  also,  swabbing  the  tables  every  so  often  with  bleach  or  some  sort  of  disinfectant.”

So how often is good enough? Dr. Esper says it’s a good idea to wash your kitchen towel at least once a week, if not more. And swap them out once they become soiled.

The Top Places Germs Are Lurking in Your Kitchen

How Often Should You Wash Your Comfy Clothes?: Coronavirus Edition

Why You Really Should Wash Your Hands After Using the Bathroom (Every Single Time!)

Is It Safe To Split Pills?

Can Pets Get Coronavirus? 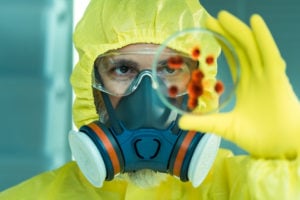 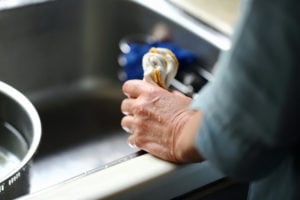 How Germy Is Your Kitchen Towel?

Be honest. Do you wash your kitchen towels routinely ― or do weeks (or a month) go by before you toss them in a load? Our infectious disease expert explains why you might want to adopt better towel hygiene.