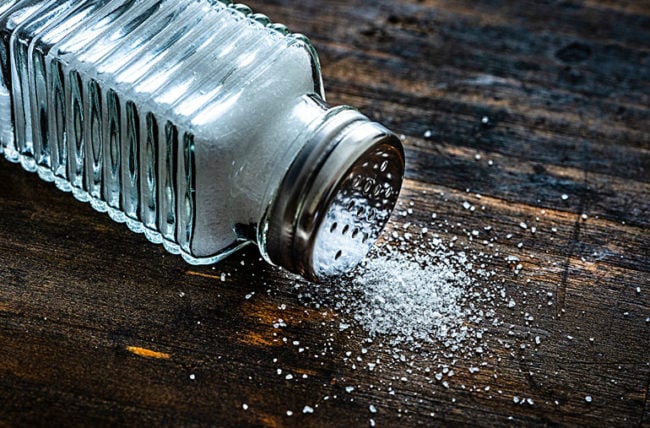 Whether you’ve had a weekend binge or you’re beginning to notice certain patterns in your diet, there may come a time when you feel the need to lower the amount of sodium you’re taking in.

While there’s a difference between the short-term and long-term solutions, they’re all related to one thing: cutting back on the sodium in your system and getting you to a better place health-wise.

How to flush sodium out of your system

If you’re feeling the effects of too much salt, there are a few ways to rid yourself of excess sodium. “The very best thing to do is sweat,” says registered dietitian Julia Zumpano, RD. “The body naturally removes sodium through sweat, tears and urine.”

To even out your sodium level, get sweaty by exercising or sitting in a sauna. Drink plenty of fluids and cut out salt and salty foods right away.

Seven tips for lowering sodium in your diet

It’s wise to reduce sodium in your diet to keep it from taking a toll on your health, especially if heart or kidney disease runs in your family. Blood pressure often rises as you age, too. So even if you don’t have problems with it now, scaling back on sodium is a smart move for the future you. Here are some tips to help you eat less salt:

You first need to determine how much sodium you’re eating every day and discover the high-sodium sources in your diet. “Most of us eat similar foods every day,” says Zumpano. “So if you just track the amount of sodium that you eat for two days during the week, plus the weekend, in a food diary, you’ll get a nice average of your sodium intake.”

Once you know how often you’re eating salty foods, you can make changes that fit your health goals. For example, you might realize that the can of soup you frequently eat for lunch has half of your daily sodium. You could switch to something lower in salt, like a salad, or look for a lower sodium soup that might cut your sodium in half and make you just as happy.

That one little change can make a big improvement in your overall sodium intake, Zumpano says. But perhaps you want to keep the can of soup because it’s a convenient choice that’s low in calories and high in fiber. You can just lower your salt intake for the rest of the day to keep your salt consumption from going too high.

Look at what foods you’re noshing all the time. Some foods are sky-high in sodium. Try eating them only occasionally or look for low-salt or no-salt-added versions. The top culprits include:

Packaged and restaurant meals account for more than 70% of the sodium Americans consume. If you frequently dine out or use prepared meals, it’s difficult to control the amount of salt you’re eating. To keep your salt consumption in check, prepare more meals at home. That way, you decide how much salt goes into your food.

4. Cut your salt in half

Do you already primarily eat home-cooked meals? If so, consider gradually reducing the amount of salt you use in recipes to manage your daily sodium. Start by putting in half the usual amount. Once you get used to that, cut it to a quarter of what the recipe calls for.

“Using this method to reduce salt helps you slowly adjust to a less salty taste,” says Zumpano. “Because going cold turkey can sometimes be difficult. It can make food taste bland.”

5. Add flavor with other seasonings

Step away from the saltshaker — you won’t need it if you use flavorful ingredients. Consider adding herbs and either salt-free or low-salt seasoning to enhance the flavor. Add zing to your meals with basil, oregano, parsley, rosemary, turmeric, ginger and strongly flavored vegetables like garlic and onions. If you like spice, it’s a great way to kick up dishes, too, notes Zumpano. Use cayenne, jalapeno or green chili peppers — fresh, dried or canned without salt.

Lower the amount of sodium in your meals when you eat out by making special requests. You can ask for:

Potassium is a mineral that works hand in hand with sodium. When sodium levels increase, potassium levels tend to decrease.

Eating more potassium has the opposite effect of sodium: It decreases your blood pressure. Add more of the mineral to your diet by eating foods high in potassium, like:

The most successful way of reducing sodium in your diet is to implement one tip until it becomes a habit. Then try another tweak. Before you know it, you’ll be eating far less salt than you were before.

“And remember, there’s no forbidden list of foods,” says Zumpano. “Just be aware when you eat high-salt foods and then adjust the rest of your day to have less sodium than normal.”

DASH Diet: What Is It, Meal Plans and Recipes

Is Salt Bad for Your Health?

Diabetes and Weight Loss: What You Need to Know How To Lower Your Salt Intake

Salt may add flavor, but too much of it can be bad for your health. There are plenty of ways of boosting the taste of food while also lowering your sodium intake.