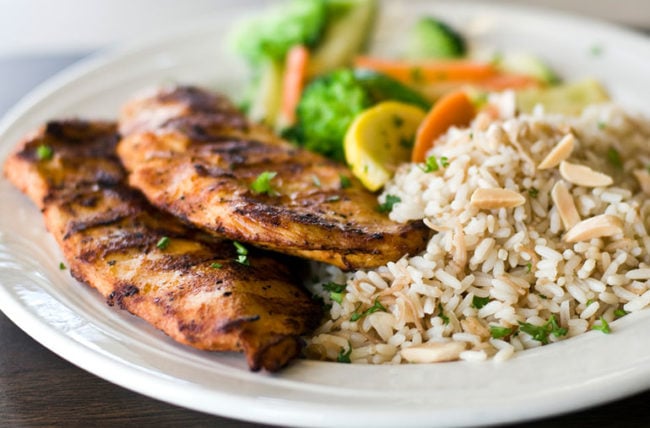 Every year, we hear one or two reports about too-high-to-be-safe levels of something in our food supply. In many cases, the danger is limited to a specific geographic region, but sometimes it’s a problem that affects the entire nation.

The Food & Drug Administration (FDA) reported in 2012 that there’s too much arsenic in two things many of us eat frequently – rice and chicken. The levels were too low to be deemed an official threat, but the presence of arsenic in food is always a concern.

Arsenic is a metallic mineral from the Earth’s crust that is released into the soil and water via fertilizers and pesticides. Organic forms are less toxic than inorganic forms. Regardless of its form, the question is whether you can feel safe eating foods that have even low arsenic levels.

You might not know it, but you likely eat more than 20 pounds of rice every year. It might be sushi, rice pudding, rice milk, or just rice that’s part of a comfort-food dinner. This white or brown grain holds a traditional place at our dinner table, but it also absorbs inorganic arsenic more easily than other foods we typically eat.

Regular exposure to arsenic, even at low levels, can slightly raise your risk of bladder, lung and skin cancer, as well as heart disease and Type-2 diabetes. It can also have a negative impact on a baby’s growing immune system.

How to eat rice more safely

Eat less rice. If you’re worried, I suggest eating only half of the daily recommended rice intake and adding more variety to the grains you eat.

Rinse your rice. The U.S. Rice Foundation advises rinsing raw rice before cooking and using a 1-to-6 cup rice-to-water ratio, draining the excess water off after cooking.

Know which types of white rice are considered safest. Overall, white basmati rice from California, India and Pakistan, as well as U.S. sushi rice, has half the level of inorganic arsenic as other rice types. However, all rice – except sushi and quick-cooking – from Arkansas, Texas, Louisiana and most other U.S. locations had the highest inorganic arsenic levels.

Limit kids’ consumption of drinks with rice. Rice-containing beverages have among the highest inorganic arsenic levels, so they should be given sparingly to children younger than age 5.

Try other grains. There are gluten-free and gluten-containing grains that have almost no inorganic arsenic, according to the U.S. Rice Foundation. For example, you could add amaranth, buckwheat, millet and polenta (or grits) to your diet, as well as bulgur, barley and farro.

The problem with chicken

But, arsenic in rice doesn’t just affect the grain. It makes its way to your dinner plate in another way – through the chicken that eats the rice as feed.

Arsenic was introduced to chicken feed in the 1940s as a way to improve muscle growth, fight disease and make the meat pinker. Most of the arsenic is excreted, but some ends up in the chicken meat.

In 2014, the FDA called for the removal of the animal drug Roxarsone from chicken feed, saying it can transform into inorganic arsenic. But, removing it from the market is an ongoing process.

Eliminating Roxarsone from chicken feed could have a significant impact on our health in the United States. According to a 2006 Institute for Agriculture and Trade Policy report, annual chicken consumption per American sky-rocketed 250 percent between 1965 and 2013, jumping from 33.7 pounds to 83.1 pounds. The same report also revealed that 70% of the 8.7 million chickens bred for the food supply ate feed containing Roxarsone.

In the meantime, if the low levels of arsenic in chicken still make you nervous, you can choose other sources of protein, including fish, beans and tofu.

However, I don’t recommend removing chicken from your diet. I eat it regularly and will continue to do so as a part of a balanced and varied diet.

Brown Rice or White Rice: Which Is Your Healthier Option?

How to Pick Heart-Healthy Mexican Food

DASH Diet: What Is It, Meal Plans and Recipes 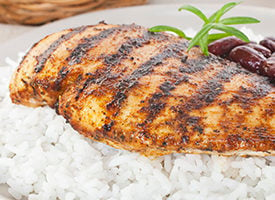 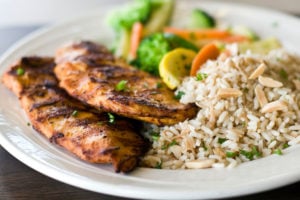 How You Can Avoid Low-Level Arsenic in Rice and Chicken

Every year, we hear one or two reports about too-high-to-be-safe levels of something in our food supply.