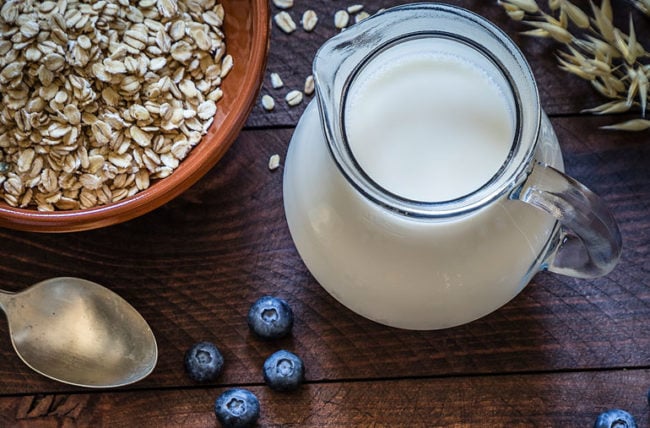 A new drink has taken coffee shops and the nondairy section of the grocery store by storm: oat milk.

What’s oat milk, you ask? It’s a popular alternative to cow’s milk (à la almond or soy milk) that’s made from oats, water and sometimes a few additional ingredients. Its creamy texture has made it a favorite of latte-making baristas, while its nutritional profile has earned points with consumers and secured its spot in grocery stores’ nondairy lineups.

But should you trade in your almond milk or soy milk for oat milk? Functional medicine dietitian Jorden Edinger, RDN, LD, discusses some things to consider.

It checks the allergen-free boxes

Oat milk can be a nice option for someone with dietary restrictions or food sensitivities because it is naturally free of dairy, lactose, soy and nuts, Edinger says.

Oats are also gluten free, but they’re often processed in the same facilities as other grains that do contain gluten, so there’s potential for cross-contamination. Edinger recommends checking the label and selecting a certified gluten-free oat milk if you are sensitive to gluten or have celiac disease.

How it stacks up nutritionally

Compared to other plant-based milks, such as almond or rice milk, oat milk typically has a bit more protein and fiber, Edinger explains.

Some of the fiber in the oats is lost during processing, but oat milk products still generally end up with around 2 or 3 grams of fiber per serving. “That’s a bit more than most almond milks but less than a bowl of oatmeal,” she says.

But it’s also higher in carbohydrates and calories than most of its plant-based peers, usually clocking in around 100 calories per serving or more, depending on the brand.

Like other kinds of plant-based milks, store-bought oat milks include added calcium and vitamin D for bone health, along with vitamin A and riboflavin.

Edinger warns that some varieties sold in stores do have added sugar, especially the flavored versions. Some brands of oat milk also include small amounts of oils, gums or stabilizers. Look for varieties that say “unsweetened” and have a simple ingredient list.

Or you could try making it at home, which would allow you to control exactly what’s added to it, Edinger suggests. The base recipe includes just oats, water and a pinch of salt blended until smooth and then strained through a fine mesh strainer.

“Keep in mind that oat milk made at home will be lower in many of the micronutrients, like calcium and vitamin D, that are added by manufacturers to store-bought varieties,” she says.

If you avoid dairy and are on a low-carb diet, almond milk might be your best bet.

But if you have a nut allergy or are just looking for a thicker, more filling addition to your coffee, smoothie or cereal, this might be a good option for you.

“Oat milk can be enjoyed and included as part of a healthy, well-balanced diet that also includes plenty of colorful produce, healthy fats and protein,” Edinger says.

Vitamin B12 Benefits and Best Sources

What You Need to Know When Choosing Milk and Milk Alternatives

Is Oat Milk Good for You? A Dietitian Explains This Trendy Dairy Alternative

Oat milk is a popular alternative to cow’s milk (à la almond or soy milk) that’s made from oats, water and sometimes a few additional ingredients. It typically has a bit more protein and fiber than other kinds of nondairy milks but also more calories and carbohydrates.