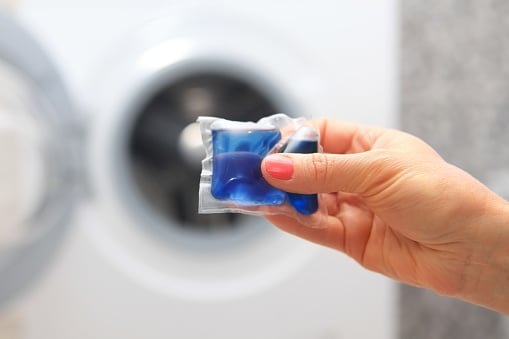 Laundry detergent pods, with their colorful, bright swirls, look like candy, so a young child might wonder if they taste like candy too. Parents know to keep these pods away from kids under age 5. What’s more surprising is a recent trend among some teens who are biting into the rounded pods as some kind of stunt or “challenge.”

Experts say there is a rise in cases of teens deliberately putting the packets into their mouths, recording video and sharing it on the internet through social media.

As a result, the number of teens in need of medical treatment after such stunts is on the rise, according to a new report published by the American Association of Poison Control Centers.

There have been other such challenges, involving inhaling cinnamon, burning the skin with salt and ice and now biting into laundry detergent pods.

In the spirit of the dare, of pushing limits and challenging their peers, teens often don’t fully recognize the risks they are taking.

Pediatrician James Mandelik, MD, says that the laundry packets are made up of a highly concentrated formula that can do a lot of damage. Ingesting laundry pods can cause burns to the mouth and eyes, as well as more serious complications.

“These pods contain surfactants that help remove stains in laundry. But in the lungs, they can cause a person to have trouble breathing; they can cause the lungs to fill up with fluids and go into full-blown respiratory arrest,” Dr. Mandelik says.

Ingesting laundry pods has also been associated with the following:

How widespread is this problem?

Over the last five years, poison control centers have received more than 50,000 calls in connection with liquid laundry detergent pod exposures, with most of the events involving young children under age five.

Recently, the problem of teen injury due to ingesting laundry detergent pods has spiked. Poison control centers report that within the first few weeks of January, they have handled as many cases of intentional laundry detergent packet ingestion among teens as they would typically see in an entire year.

What parents can do

Dr. Mandelik says parents need to be vigilant if they have these items in their home, and they also need to have frank discussions with their older children.

“They aren’t putting laundry pods into their mouths by accident. They’re doing this on a dare,” he says.

He suggests talking to teens and letting them know about the seriousness of the risks.

“Let them know, say, ‘Hey, this is not a benign thing. It’s not just that you’re going to taste something bad, but you could harm yourself permanently or even kill yourself,’” he says.

He adds that people should act quickly if they suspect exposure. “If you find any person has misused a laundry detergent packet or any such concern, call 9-1-1 immediately.”

How to Talk to Children About Traumatic Events

Worried About Someone’s Mental Health? How To Help Poison control centers are reporting a surprising trend among some teens, who are biting into laundry detergent pods as some kind of stunt or “challenge.” Learn about the health risks and how you can talk about the dangers with your kids.