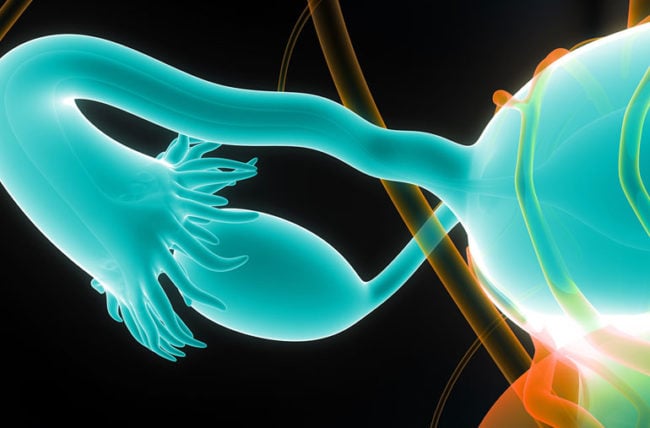 The process of becoming pregnant begins with ― and depends on ― ovulation, when a woman’s body releases an egg from one of her ovaries to be available for fertilization.

Ovulation problems are the most common cause of female infertility. They occur in about 20% of the 6.1 million women in the U.S. ages 16 to 44 who have difficulty getting or staying pregnant.

A major feature of PCOS is hormone imbalance. Why PCOS happens isn’t clear.

Normally, hormones released by the pituitary gland in the brain control the ovulation process, regulating an egg’s growth and triggering the ovary when it’s time to release it. If the levels of these hormones change, the ovary may have difficulty developing and discharging a fully mature egg. Instead, unreleased eggs form tiny cysts inside the ovary.

Women with ovulation problems usually report having unpredictable menstrual bleeding patterns and/or intervals between periods that last longer than 35 days. To be diagnosed with PCOS, most women have at least two of these signs or symptoms:

The good news is that ovulation problems such as PCOS can be corrected, and are often easier to treat than other types of infertility, Dr. Attaran assures. Most patients ― as many as 85% ― will be able to ovulate, and as many as 40% of those will conceive, after taking oral drugs called antiestrogens (clomiphene citrate, brand name Clomid®) or aromatase inhibitors (letrozole, brand name Femara®). The drugs adjust levels of the hormones that regulate ovulation.

Clomiphene citrate is approved by the Food and Drug Administration (FDA) for treatment of ovulation problems and is the drug that doctors normally use first to treat women with PCOS. It’s a pill taken for five days, beginning the second to fifth day after a woman’s period starts.

Common, mild side effects include hot flashes, mood swings, pelvic discomfort and tenderness in the breasts, says Dr. Attaran. Women taking clomiphene citrate have a slightly increased chance (about 9%) of a multiple pregnancy (twins or more). Doctors usually don’t prescribe the drug for longer than six months because its effectiveness drops off over time.

A drug with fewer side effects

In the last decade, doctors have been prescribing letrozole more often as an alternate treatment for PCOS, even though its FDA-approved use is as a breast cancer treatment. Such use, which is legal, is called “off-label.”

“Some doctors opt for letrozole for their PCOS patients because it appears to be as effective as clomiphene citrate, but with fewer side effects and less risk of multiple pregnancies,” explains Dr. Attaran.

A 2005 Canadian study suggested that letrozole may increase the risk of birth defects, but follow-up research has not shown this to be the case.

Women with PCOS who are unable to become pregnant after taking either drug may still have success with more advanced infertility treatments. These options include hormone injections, minimally invasive surgery to stimulate ovulation, and in vitro fertilization.

What Is Chasteberry, and What Can It Do?

Can Birth Control Cause Infertility?

Controlling Your Blood Sugar Can Improve Your PCOS and Hormone Imbalance

PCOS: What You Should Know About Infertility’s Most Common Cause

PCOS may be common, but it is also treatable. Our Ob/Gyn explains what help is available if you’re looking to start (or add to) a family.