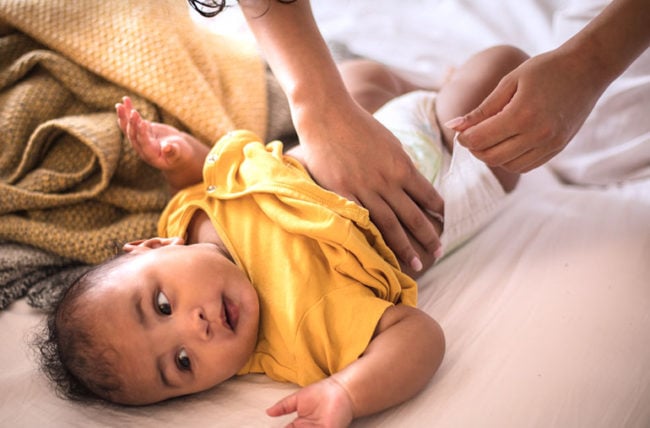 As a new parent, you expect to change hundreds – if not thousands – of poopy diapers. Yet the broad range of colors and textures you’ll encounter are at times concerning or downright shocking.

Pediatrician Jason Sherman, DO, demystifies what hues are healthy and which warrant a call to your pediatrician.

The color and texture of poop evolves dramatically – sometimes alarmingly so – over baby’s first days and months. Don’t spend any longer than necessary pondering a stinky bowel movement.

Here’s what you can expect:

Baby’s first stool, within the first few days of life, called meconium, rids a newborn baby of all the materials swallowed in utero: amniotic fluid, intestinal epithelial cells, lanugo, mucus, bile and water. (If you don’t see it within 48 hours, mention it to your pediatrician.) It’s very sticky and you may need an entire tub of wipes for this one.

“After the first few days, meconium stools should never be black again,” says Dr. Sherman. “If the stool is black, white, clay colored or you can see blood or mucus in the stools, you need to call your pediatrician and let them know.”

In their first week of life, breastfed babies have three to four mustard-yellow, seedy, loose stools every 24 hours. Many babies poop after each feeding, so don’t worry about not using up the newborn size before they outgrow them. Later on, they may continue to poop after nursing, or only poop once a week. Either is normal!

Formula-fed babies have thicker, darker stools once a day (or more often) from day one. They’re usually tan, but can also be yellow or greenish. The consistency is similar to peanut butter or hummus.

Don’t freak out: Once you introduce solids, know that you’ll find a new “guacamole-esque” hue awaiting you at diaper changing time. As more foods are added, you might notice other colors – such as orange and yellow – and occasionally whole beans or raisins.

Toddlers’ stools gradually bulk up to a Play-Doh-like consistency. How often they poop isn’t important. What matters is consistency. The downside of toddler poop? It starts smelling more like regular grown-up poop.

A thick, dark-as-a-pine-tree-at-night poop may look off-putting, but it’s typically no cause for concern. The most usual culprit: an iron supplement or iron-fortified baby formula. The discoloration has no effect on your baby’s health – just possibly your appetite!

This hue may be seen in breastfed babies who switch breasts often, consuming more lower-fat than full-fat milk. Try nursing until your baby drains the breast before switching. Viruses can also cause bright green stools, so contact your pediatrician if your baby isn’t acting normally.

“Brown, yellow and green are all normal,” says Dr. Sherman. “It can often go back and forth between the them, but if its yellow brown or green you likely have nothing to worry about.”

Some babies poop with every feed and other babies poop every five to seven days. If your baby is one that poops less frequently, as long as they are going once a week, their abdomen doesn’t get distended and they aren’t overly fussy or irritable, then you can have a piece of mind.

Call your pediatrician immediately if you see any of the following:

A word about diarrhea and constipation:

Too liquidy. While baby poop isn’t as solid as adult poop, if it’s extremely loose and watery – that’s diarrhea. Don’t ignore these diapers as they can be a sign of an infection and put your little one at risk for dehydration. Other causes: food sensitivities/allergies, giving a toddler too much juice, a side effect of antibiotics or a symptom of inflammatory bowel or celiac diseases. Call your pediatrician if it lasts for more than 24 hours. Most cases resolve in two to three days.

Too hard. If your baby is straining before bowel movements and producing dark, hard stools, your little one is constipated. Sometimes it’s just that a baby’s digestive tract absorbs too much water – ask your pediatrician because there may be some simple solutions. Other possible causes: food sensitivities/allergies, dehydration, or in rare cases, more serious conditions such as anatomical problems, thyroid dysfunction, metabolic disorders or Hirschsprung’s disease.

For babies, stools should be an apple sauce-type of consistency for the most part. As kids get a little older, to about age 1 or age 2, it will change to more of a tooth paste or peanut butter type of consistency. If the stool is ever hard, little balls or really formed from an early age, that is often a sign of constipation and you should discuss with your pediatrician.

Odds are, over the course of changing hundreds of diapers, you’re sure to run across a few that surprise you. Since it’s not always easy to tell what’s normal and what’s not, call your pediatrician if you have any doubts.

Poop Shape, Color and Smell: What’s Healthy and What’s Not

5 Rashes Your Child May Bring Home From Preschool

How Your Diet Can Affect Your Poop Color

Here’s How Menopause Affects Your Skin and Hair 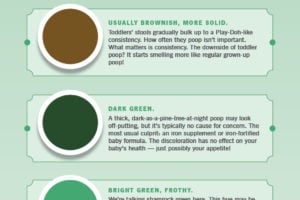 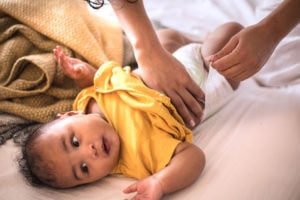 The Color of Baby Poop and What It Means

The color of your baby’s poop evolves dramatically. Our pediatrician demystifies what hues are healthy and which warrant a call to your pediatrician.