If you’re a gum chewer, you’ve been there: You need to get rid of your gum, but there isn’t a trashcan to be found, not a scrap of paper in sight. Sure, you could stick it to the underside of a table, but you’re not trying to be rude.

So, you swallow it.

But now what?! Rumors say gum stays in your stomach undigested for up to seven years. Registered dietitian Beth Czerwony, RD, debunks this claim and explains what really happens when a piece of gum makes its way into your insides.

Is it bad to swallow gum?

Swallowing one piece of gum every now and then isn’t likely to do any harm. But you shouldn’t make a habit of swallowing your gum on a regular basis, as it has the potential to do some damage.

Gum used to come from tree resin. These days, though, chewing gum is made of a substance called gum base, which is largely synthetic — not made from any real food ingredients. Gum base is non-nutritive, which means it doesn’t provide any nutritional value, and is nondigestible, which means your body can’t break it down like it does other foods.

“Gum base isn’t able to be digested, so it just stays in your guts all the way through and doesn’t break down,” Czerwony explains.

Does gum stay in your stomach for seven years?

“If you’ve swallowed a piece of gum, it’ll come out about 40 hours later in your stool,” Czerwony assures. “Because it can’t be digested, it comes right out whole.”

That sounds alarming, but it’s actually not that unusual to swallow things your body can’t digest. Raw seeds, kernels of corn and the skin of bell peppers are just a few common foods that typically pass through your digestive system relatively untouched.

So, as long as you’ve only swallowed one piece of gum, there’s really no need to even keep an eye on your poop to watch for the gum to pass. Just trust that what goes in will eventually come back out.

When you should go to your doctor

Swallowing one piece of gum probably won’t hurt you, but beyond that, be careful. Czerwony says swallowing a lot of gum in a short period of time — say, one piece a day for a week, or a mega-wad consisting of four pieces of gum at a time — can put your digestive system in danger.

“If you do this every day, or multiple times a day, it can cause an intestinal blockage,” she cautions. “Anything you eat after that isn’t going to be able to get through, which causes a backup that leads to pain and pressure.”

Think of it like a blocked pipe in your home: If something gets stuck in the pipe, it clogs up the whole system. Nothing else can get beyond the blockage, which causes increased pressure within the pipe. And if the blockage isn’t cleared, the pipes can eventually crack or even burst.

“A blockage isn’t going to clear itself,” Czerwony warns. “Left untreated, it can cause a rupture of the gastrointestinal tract.”

See medical attention immediately if you’ve swallowed a lot of gum and start to experience signs of an intestinal blockage, like:

What if your child swallows their gum?

Kids are inclined to swallow all kinds of wacky things they shouldn’t (marbles, miniature action figures, etc.), but in this case, you don’t need to worry too much. Kids will poop out swallowed gum in a few hours just like adults will.

Again, though, if your child has swallowed more than one piece of gum, keep a close eye out for any signs of gastrointestinal distress.

The American Academy of Pediatrics says the occasional piece of gum is OK for children ages 5 and up — just be sure that before giving gum to your child, they understand that it’s not something they should swallow.

It’s best to spit it out

The easiest way to avoid the risk of an intestinal blockage from gum is not to swallow it at all. Whenever possible, spit the gum into the nearest napkin or trash can. “It’s just not a food,” Czerwony says.

What to Do If Your Child Eats Toys, Magnets or Batteries

Is It Bad to Lose Weight Too Quickly?

Tips to Reset After a Food Binge

Are There Any Health Benefits to Drinking a Gallon of Water a Day? 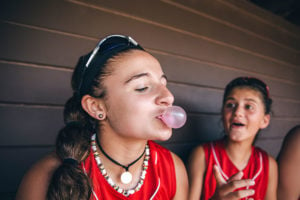 Oh, no — you swallowed your gum! Will it really stay in your stomach now for the next seven years?! A dietitian debunks this old wives’ tale and explains what really happens when a piece of gum makes its way into your insides.