As women enter a new stage of their life, more and more women over age 40 are choosing to have breast augmentations.

Plastic surgeon Risal Djohan, MD, says “We see both young women who have not yet had children and women who have already had their children come in for breast augmentation. But these two age groups often have different reasons for wanting the surgery and different goals.”

What women want from breast augmentation

Dr. Djohan says that the younger women, age 20 to 23, are more likely to have more severe breast hypoplasia. In other words, they usually have very small breasts when they come to see him at this age, and they hope to attain a fuller, more shapely look, while still appearing natural. And he says a small percentage of women come to him with congenital breast conditions.

The older women Dr. Djohan sees typically voice concerns about age-related changes to breast appearance. Aging causes a loss of volume and breast tissue begins to sag. This is typically related to postpartum deflation of breast tissue after pregnancy and nursing but also can be caused from gravity over time, he says.

“Many women are waiting until later to start their families. Once they’ve had their children, they’re older than women in the past who finished having babies by their early 30s. This may contribute to this trend of older women choosing to have the procedure,” explains Dr. Djohan.

He says that while there’s nothing wrong with getting breast implants before you have children, breastfeeding can become a concern. Most women can breastfeed after having implants, but depending on a number of factors, a minority of women cannot successfully nurse after having the surgery. Women who have finished childbearing don’t have to consider this possibility.

Special concerns for breast implants over 40

“Many women over 40 worry if getting breast implants may interfere with having mammograms,” says Dr. Djohan. “In terms of mammograms and imaging over time, breast augmentation tends to be quite safe,” he says, adding that most of the time plastic surgeons place the implants under the muscle, which puts them in a separate space from the breast gland.

If you’re in the age bracket and considering breast implants, let your mammography technician know you have breast implants before the imaging process starts, Dr. Djohan suggests. The technician will then use special techniques when taking images of your breasts so the implants don’t interfere with the radiologist’s ability to detect any problems.

Sometimes women fear that the squeezing from the mammography device could rupture or displace their implants, causing a need for corrective surgery. But Dr. Djohan says that isn’t likely to happen.

“Implants should not rupture or become displaced with a mammogram. I know that they’re squeezed in different shapes during the process, but an implant that is intact with sound placement or positioning should not have an issue,” says Dr. Djohan.

However, implants usually have a shelf life. But he says the likelihood for the need of replacement in 10 years is less than 10%. He says if you notice any changes during a self breast exam, you should check with your doctor for an exam.

“As an implant gets older, the outer shell can lose strength and leak,” Dr. Djohan says. “When the integrity of the outer shell deteriorates, the implant is more easily broken.”

For example, if a woman received her implants 25 years ago and now goes in for a mammogram, the possibility of rupture increases. He says implant material certainly has evolved with stronger outer shell material and implant fill with increased cohesivity.

Women older than 40 tend to have more realistic expectations about what breast augmentation can do for them and why they want the surgery in the first place. According to Dr. Djohan, the primary concern with this age group is a loss of volume with a lot of excess skin on the breast due to childbirth or weight loss. The surgeon needs to evaluate whether this excess skin will interfere with the aesthetics of the implant placement only without adjustment of the skin and breast tissue envelope covering it.

Despite any concerns, it’s really no big mystery as to why more women older than 40 are choosing to have breast augmentations. Older women are typically more self-assured about their place in life and are often more financially secure than many younger women, which likely contributes to this growing trend.

“Women past childbearing age have no intention of spending their later years feeling frustrated by their bodies and most report high levels of satisfaction after undergoing breast augmentation surgery,” he says.

Confused About Breast Implants? 7 Facts and Tips to Consider

Everything You Need To Know About ‘Mommy Makeovers’

Implants or Tissue Transfer: What’s Right for You After a Mastectomy?

A Surprising Way to Enlarge Your Breasts Without Implants 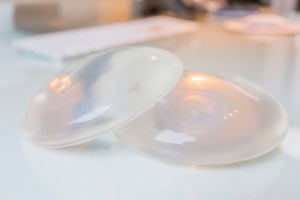 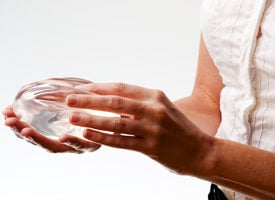 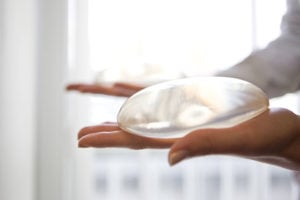 More women in their 40s are choosing breast implants. But are there special considerations to be aware of? Find out, from how mammograms work to accompanying breast lifts.