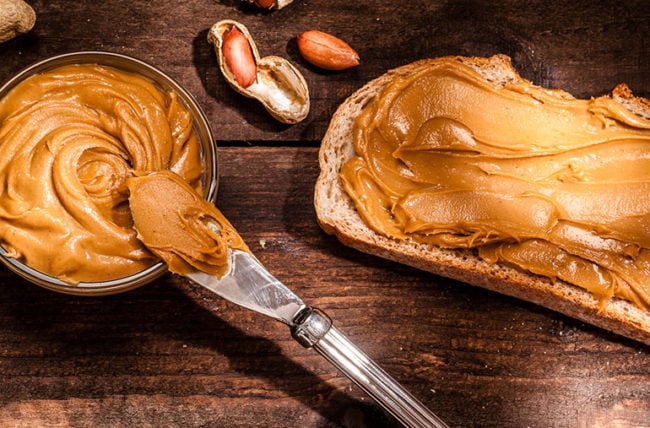 Peanut butter is one of the hallmarks of comfort food, from peanut butter and jelly sandwiches in school to peanut butter flavor and content in every baked good imaginable. It’s the perfect mix of salty and sweet for snacks.

But how healthy is peanut butter and, despite our love for it, is there really such a thing as too much?

Is peanut butter good for you?

Sadly, peanut butter isn’t very good for you — at least in the amounts that we’re used to consuming. Peanut butter contains protein, good monounsaturated and polyunsaturated fats and contains the powerful antioxidant vitamin E, bone-building magnesium, potassium and vitamin B6.

The problem is that many of us are eating way too much. Whether it’s slathering it all over bread or eating it by the spoonful, peanut butter is definitely a snack food we’re overdoing.

It’s that lack of moderation, those large amounts, that can have a negative impact on our health, according to cardiologist Dennis Bruemmer, MD, PhD. And we spoke with him in more detail about peanut butter and whether it’s something you can ever enjoy, guilt-free.

Does peanut butter have cholesterol?

But while that may bring you a sigh of relief, it doesn’t mean that there aren’t other aspects of the snack spread that make it unhealthy, especially in larger amounts.

“Most people don’t consume just a little bit, though,” he continues. “For many people, they’ll take a spoon and suddenly half the jar is gone. A two-tablespoon serving of peanut butter has a couple of grams of saturated fats but when you eat half the jar, that becomes an issue.”

“Peanut butter does typically have a good amount of both saturated and unsaturated fats. It’s highly dense with salt and it’s high in calories,” he adds, “and I think the calories and sugar would be more of what I would be concerned about.” Major store-bought brands can also contain hydrogenated oil or palm oil, molasses and high fructose corn syrup.

How many calories are in peanut butter?

In fact, the average store-bought brand of peanut butter, both creamy and chunky styles, contains around 190 to 200 calories per serving, which is only 2 tablespoons. It doesn’t take long for that to add up by the spoonful.

One issue when it comes to kids, Dr. Bruemmer adds, is how too much peanut butter could help contribute to childhood obesity. Around 70% of American adults are either have overweight or obesity, according to the CDC, and one in five kids in the United States has prediabetes.

There are alternatives, like almond butter and nutella, that you could use instead of peanut butter. But are those really any healthier than peanut butter? Dr. Bruemmer says no.

“I don’t think nutella is healthier than peanut butter,” he says. As for other alternatives, like almond butter or reduced fat peanut butter, you’re simply replacing one component (peanut butter) with something that has only marginally less saturated fats, sugar or salt.

With low-fat peanut butter, too, the calories are the same or higher, thanks to the extra ingredients ― usually sugar ―  that manufacturers add to improve the taste after taking out the fat.

“If the primary goal is to lower your cholesterol, I think the primary concern should be to decrease saturated fat content. Meats, butter, cheese, they’re high in saturated fats,” he says. “Cutting down on those, including peanut butter, should be the ultimate goal in bringing that down.”

You can also consider natural peanut butter, says registered dietician Julia Zumpano, with nothing else but peanuts on the label’s ingredients list; you can always add a little salt to taste yourself. Avoid brands with added sugars, fats, salt, preservatives and chocolate. And be sure to read the ingredients list to make sure that “natural” peanut butter isn’t also trying to sneak in other additives.

Your Fridge: 3 Foods You Should Pitch (and Why)

Your Guide to the Best Nut Butters and Other Creamy Spreads 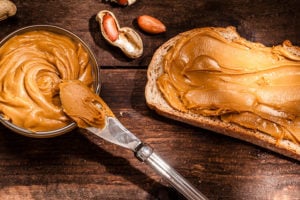 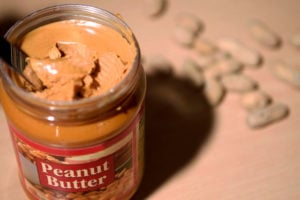 What You Should Know About Peanut Butter and Cholesterol

Peanut butter is a very popular food staple, especially among kids, but it’s not without health risks.