You’re likely concerned if your baby boy is missing a testicle at birth. But don’t panic — it’s probably there, but you just can’t see it.

While in the uterus, a baby’s testicles initially develop in his abdominal cavity. Not long before birth, they typically ‘drop’ (the proper medical term is descend) into his scrotum. In some cases, though, one or both testicles fail to descend before birth. This is known as an undescended testicle or what doctors call cryptorchidism.

Cryptorchidism is not that uncommon for baby boys, especially if they’re born early. It only happens in about 3% of full-term babies, but the percentage rises to 30% in premature baby boys.

So what should you do? Pediatric urologist Jeffrey Donohoe, MD, discusses five key facts you should know about undescended testicles:

1. In 80% of babies who have cryptorchidism, the testicle is found in the groin.

In that case, your pediatrician likely is able to feel it during a physical exam. If your doctor can’t feel the testicle, it may also be in the abdomen. In either case, the condition isn’t likely painful for your son.

2. Cryptorchidism can be caused by different factors.

Dr. Donohoe says it can either be congenital (present at birth) or acquired (the testicle moves up out of the scrotum as your child begins to grow).

Undescended testicles are typically diagnosed during a physical exam. Your child should not need an ultrasound, X-rays, a CT scan, an MRI or any other type of imaging study.

4. You need to see a specialist.

“Most pediatricians are good at identifying cryptorchidism early on and referring the infant to a urologist,” says Dr. Donohoe. You should take your son to a urologist by the time he is 6 months old, or sooner, if you have concerns or questions.

If your child has both cryptorchidism and hypospadias (a birth defect in which the opening of the urethra is not located at the tip of the penis), he will need further evaluation to make sure he won’t have problems with sexual development. And if the cryptorchidism is bilateral (on both sides), he could also be at risk for problems with sexual development.

It’s possible that the testicle will descend on its own by the time your baby is 6 months old. If it doesn’t, he will need surgery. The good news is that surgical repair is an outpatient procedure made with small incisions. If the testicle is in the abdomen, the procedure can be performed laparoscopically, a minimally invasive approach.

Even though cryptorchidism isn’t painful, it is important to address in order to reduce the risk of complications from testicular cancer and infertility.

Should You Worry If Your Son Complains of Testicle Pain?

Having a Healthy Pregnancy When You Have Rheumatoid Arthritis

What To Know About Vaginal Strep If You’re Pregnant

What You Should Know About Postpartum Sex 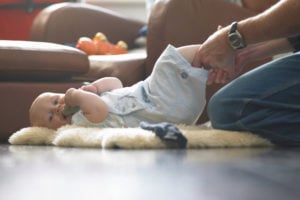 Should you be concerned if your baby boy is missing a testicle at birth? A urologist talks about five things you should know about undescended testicles.