Do you rely on go-to vegetables like broccoli, spinach and carrots mainly because your family will eat them? If so, some awesome veggies are flying under your radar.

Many common vegetables belong to the cabbage family (genus Brassica). The edible members of this family are called cruciferous vegetables. One veggie that falls into this category are Brussels sprouts.

“Properly prepared Brussels sprouts are a tremendous addition to your veggie options,” says Zumpano. “They’re a great source of vitamins C and K, and provide fiber, too.”

Some researchers have suggested that sulforaphane may play a major role in preventing prostate and colon cancer. You can find high levels of sulforaphane in Brussels sprouts.

Like its cruciferous cousin the cabbage, Brussels sprouts give off hydrogen sulfide gases when cooked too long. These can be off-putting.

Prep tip: Overcooking Brussels sprouts makes them smell and also robs them of their nutritional benefits. For optimum nutrition, quarter and steam Brussels sprouts for less than 5 minutes. Then, finish off by adding a little garlic or lemon.

People don’t always know what to do with watercress, but this cruciferous veggie packs a serious punch. Watercress is a white crunchy veggie that has a mild flavor.

The big prize came in 2014, when watercress was named the top powerhouse veggie in terms of antioxidants.

Prep tip: Watercress is an easy, toss-into-anything kind of veggie, she says. Add it to salads or a stir fry, pairs well in Asian cuisine, or place it on top of a beautiful piece of wild fish.

Artichokes are a versatile veggie — you can eat the hearts as well as the leaves.

“Artichokes are extremely rich in antioxidants and are a good source of folate, potassium and many other vitamins and minerals,” she says. “Plus, they’re low in calories with just 45 calories in 1 cup cooked hearts. They also have about 5 grams of fiber.”

Don’t be fooled by its pale color — cauliflower is packed with nutrients. Like other cruciferous veggies (Brussels sprouts, cabbage, kale, bok choy and broccoli), it’s rich in glucosinolates. Glucosinolates are being studied for their anti-cancer properties. Plus, a number of research studies suggest that a diet rich in cruciferous vegetables may lower rates of a variety of cancers, including breast, pancreatic, bladder, lung, prostate and colon cancer.

Cauliflower can be steamed whole, sliced into thick “steaks” and then coated with any combination of toasted sesame seed oil, lemon juice, soy sauce, cumin, coriander, anise or chili pepper. This dish makes a particularly impressive presentation, and it’s on almost everyone’s diet, whether you eat gluten-free, vegan or paleo.

More recently, cauliflower has been used as a rice or potato alternative, for a low carb side dish try riced cauliflower (can find it pre-riced in the frozen section) or mashed cauliflower (replace cauliflower for the potato in your favorite masher recipe.)

Prep tip: Line a cookie sheet with foil, mist it with olive oil, and line up prepped cauliflower florets. Top with another mist of olive oil and a dash of garlic, black pepper or Parmesan cheese. Bake at 425°F for 10-20 minutes until fork-tender.

Everyone knows about broccoli, but this cross between broccoli and kale is underrated and underconsumed in the United States.

Cucumber may not be as dense in nutrients as other veggies, but considering it has only 16 calories and 4 grams of carb per cup, it packs a punch.

Prep tip: Cucumbers can be used in so many ways — as a snack with hummus or Greek yogurt dip, in salad or in sushi, to replace chips or crackers for guacamole and cheese, to add flavor to water and mixed drinks. Cucumbers are also a great veggie to introduce to kids.

Keeping raw veggies on hand for munching is good for your waistline and your health.

The strong flavors of cruciferous veggies stand up against lots of distinctive spices, herbs and garnishes. For example, try cooking chicken or salmon on a thick bed of bok choy and cabbage with a sauce of balsamic vinegar, olive oil, garlic, ginger, honey, fresh tomato, salt and pepper. Just toss all the sauce ingredients into the blender, and give it a whirl.

Roasting cauliflower, sliced fennel, asparagus, Brussels sprouts, carrots and other veggies is also a snap, plus they’ll help spruce up your dinners. What’s not to love?

Why Do I Keep Farting?

What Should You Eat During Your Period?

What Are the Health Benefits (and Risks) of Eating Raw Sprouts?

15 Foods That Can Cause Bloating

How to Fix a Healthy, No-Fuss Buddha Bowl 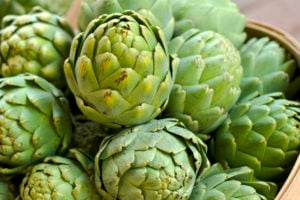 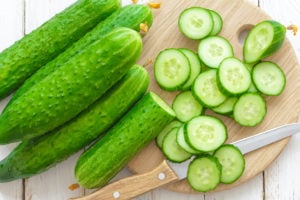 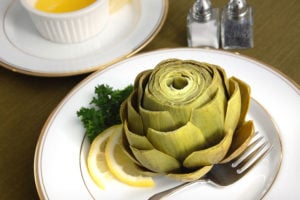 The 6 Most Underrated Veggies and How to Enjoy Them

Are you preparing the same veggies over and over again? Time to get out of your cooking rut! Here are six often-neglected vegetables our dietitians recommend trying.