We’re diving right in to tell all about oysters — the shelled gems of the sea with their distinctive, chewy texture and salty, briny, fishy-fresh flavor. It’s a texture and taste you either totally love — or maybe won’t even float.

If you’re not in the oyster camp yet, you might want to join now. Because they’ve got a lot more going for them than their unique sea-like flavor profile.

“Yes, oysters are very good for you,” according to preventive cardiology dietitian Julia Zumpano, RD, LD.

“In fact, you probably didn’t know that it’s hard to beat all the health benefits of oysters from a nutritional standpoint,” she says.

Oysters vary in size, based on the location they are coming from.  Regardless they are extremely low in calories. In a serving of six medium-sized oysters (wild, raw or steamed) you’ll consume less than 50 calories. That’s 50 calories, total which makes them very heart-healthy. It’s no wonder people order them by the dozen.

Even breaded and fried (which we don’t recommend except for as an occasional splurge because that’s not heart-healthy, but is still a popular way to eat them) — six medium oysters contain just 175 calories.

High-five for being high in protein

Each oyster can have up to 2g of protein, depending on their size. That means a half-dozen oysters can give you around 12 grams of protein which is equivalent to about 2 oz of meat.

With age, men and women alike can become deficient in some of these vitamins and minerals. We may not eat enough foods containing important nutrients, or an illness or medication can affect our body’s ability to absorb some of the vital ones.

It turns out they’re a rich source of these key nutrients when eaten:

These are excellent benefits, especially for women over age 40. “As women get older they can really benefit from this entire list of minerals, especially copper and zinc, which can assist in preventing macular degeneration,” Zumpano says. Vitamin D is mainly obtained from sunlight exposure, although getting it from food is a safer way to reap the benefits of vitamin D.

Do oysters really ramp-up your romantic side?

And the question everyone really wants to know — are oysters an aphrodisiac?

The question of whether or not raw oysters can cause sexual arousal has lingered over the years. However, there is little, if any, scientific support for this assertion.

So why have oysters been so long associated with romantic lore? Perhaps, because oysters are high in zinc — a mineral important to sexual health. Oysters may also fill a nutrient deficit that contributes to impotence in some men.

“While there’s no mounting evidence that oysters alone will enhance your love life, you might eat them to love your body and to give it good fuel,” Zumpano says.

Psychologically that might be enough to make you feel like quite a catch — and where that leads is all in your court.

How to eat and prepare oysters healthily

There are other common questions about eating oysters. Are they alive when people eat them? How do you prepare oysters?

At restaurants, oysters are shucked or opened with a knife by prying the connective muscle at their base. They arrive on a glittering bed of crushed ice with a wide-open look inside their pearly shells. Some douse them in vinegary mignonette, brighten them up with a squeeze of lemon or a drop of hot sauce to spice things up.

And some take them as they come with their cold, salty-sea freshness as the only thing needed to slurp them down whole.

In most restaurants they likely aren’t alive when people eat them, but  when served this way they’re most likely very fresh, raw or cooked.

If you make them at home, Zumpano offers some cooking suggestions.

“Steaming is healthiest and best because it will also help kill any harmful bacteria present. Avoid preparing them in unhealthy fats, such as butter, margarine or cream sauce. And try tossing them in an olive oil or tomato-based sauce for a light, fresh recipe that really compliments their flavor,” she says.

“Wrapping a new food into your diet can be a simple matter of learning why you should love it and then finding the right recipe — and these nutrient-rich shells are really worth a try,” Zumpano emphasizes.

Why Vitamin K Can Be Dangerous If You Take Warfarin

How to Enjoy Summer Cookout Food While Staying Healthy 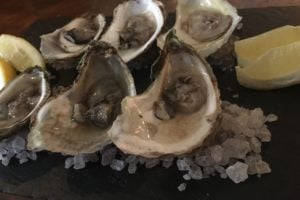 The Many Reasons to Love Oysters — Even If You Hate Them

Oysters. There’s no disguising the fact that they come from the ocean. They have a distinctive, chewy texture and briny taste that you either love or hate. But are they good for your health?