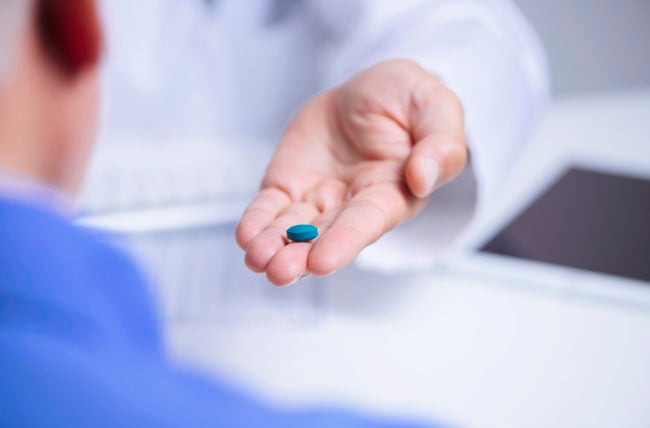 Along with all of the hype you hear about Viagra®, there are also a few myths that seem to follow that little blue pill around. But is what you’ve heard true?

Maybe your doctor gave you a prescription, but you’re hesitant to try it because you’ve heard stories about unending erections or dangerous side effects.

Urologist Drogo Montague, MD, helps set the record straight on how Viagra performs — both inside and outside of the bedroom.

Myth No. 1: Viagra is bad for your heart

Viagra was originally intended to treat angina (chest pain), which it does well — just no better than other medications. Stiffer erections were a side effect.

“Here’s a drug that not only treats angina and is good for the heart, but it works on the penis when other medications don’t,” he says.

Like nitrates, it helps dilate blood vessels constricted by coronary artery disease. But it also similarly lowers blood pressure. If you take the two medications together, your blood pressure could drop too low, putting you at risk for a heart attack.

Myth No. 2: Viagra damages your eyes

The facts: No, taking Viagra to enhance your bedroom performance won’t make it harder for you to see your partner. However, once in a while it could make everything seem a little blue, especially if you take the maximum 100 mg dose.

The chemicals in the drug can temporarily change how light hits your eye, and everything takes on a short-lived blue tint.

“This side effect can happen with higher doses, but it’s uncommon,” Dr. Montague says. “There’s no bad impact on the eye, but pilots can’t take it because of the possible color tint.”

The facts: While this may sound intriguing theoretically, this condition (known as priapism) can be harmful. Fortunately, it doesn’t really happen if you’re only taking Viagra.

“To my knowledge, Viagra has never caused a prolonged erection by itself,” Dr. Montague says. “But, it can happen if you’re also getting penile injection therapy.”

Combining the treatments has a cumulative effect — penile injection therapy makes your erections hard, and adding Viagra makes them harder and even more long-lasting. So, stay on the safe side and don’t pair them, he says.

One final fact: Viagra can prevent penis bending and scarring

It’s no secret that Viagra makes your penis harder for penetrative sex. But what you might not know is that it can save your penis from injury — if you start taking it early enough.

If you’re experiencing erectile dysfunction but wait to talk to your doctor until you can’t achieve an erection hard enough for penetrative sex, you may damage your penis. Having sex with an erection that’s barely “hard enough” can bend it and tear tissues that may scar as they heal, Dr. Montague says.

Scar tissue isn’t elastic like healthy penile tissue, so it will force your penis to bend with future erections, creating a condition known as Peyronie’s disease.

This affects 9 percent of men between the ages of 40 and 75. Many of these men have what Dr. Montague calls erectile insufficiency — erections that are not as firm as they used to be. During intercourse, bending may damage the penis. Taking Viagra could help prevent the problem and avoid an injury with lifelong consequences, he says.

No matter what your concern is, talk with your doctor. “If you’re having erectile dysfunction problems, you should feel confident going to your doctor. It’s a common issue,” Dr. Montague says. “Many men are embarrassed, but they shouldn’t be. Help is available, and it’s worth a try.”

Family History of Heart Disease? Here’s What You Need to Do

Rumors about Viagra make some men hesitant to try it. Find out what’s true, what’s not, and how that little blue pill might actually help protect your penis.