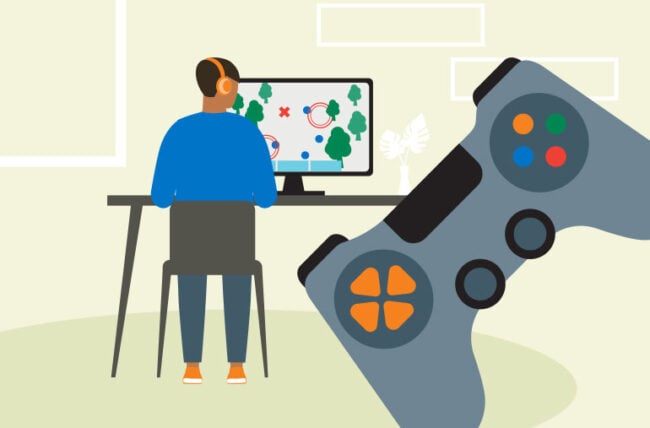 Video games offer a considerable amount of adventure and entertainment. Traditional games, like Tetris, or the more modern Candy Crush Saga, are puzzling brain busters that require a certain level of strategy in order to be successful.

Others, like Nintendo’s Breath of the Wild or Ubisoft’s Assassin’s Creed series, provide an escape from the real world and into familiar or far-off places. And even violent video games like The Last of Us 2 have become critically acclaimed for their level of inclusivity and accessibility, impactful storytelling and innovative game design.

But in recent years, regardless of genre, the pros and cons of video games and how they affect our brains have been a hot topic of discussion — particularly when discussing video game addiction. Defined as a mental health disorder by the World Health Organization (WHO) in 2019, video game addiction is a controversial diagnosis that has left researchers debating on whether it should be classified as an addiction or mental illness at all, leaving many of us asking the question: Are video games good for you?

Pediatric behavioral health specialist Michael Manos, PhD, explains how video games affect your brain in good and bad ways, and when video game addiction can be a real problem.

Is gaming good for your brain?

The American Academy of Pediatrics recommends children under 2 should have no screen time and kids ages 2 to 5 should get an hour or less of screen time per weekday and three hours on the weekend days (and Dr. Manos agrees that this is a good rule of thumb).

But a recent study of more than 2,200 children discovered that gamers who played more than 21 hours a week performed better than non-gamers when they were tested for impulsive behavior and memorization. In fact, researchers observed gamers had more activity than non-gamers in regions of their brains that were associated with attention and memory.

While the direct causes for these changes in children’s brains are unknown, there have been a number of other positive findings related to positive effects of video games.

Much research has been done to show that video games impact brain plasticity (your brain’s ability to change in response to learning) through the use of attentional control and reward processing. The idea here is that the more you’re able to direct attention toward a certain task, the more stimulated you are by completing that task. From there, you can then move on to more complicated tasks. This is especially important when you consider that your brain’s gray matter — the outer-most layer of your brain — contains billions of neurons and is responsible for controlling your movement, retaining your memories and regulating your emotions. Essentially, the more you learn, the more your brain can adapt.

Unlike TV shows and movies, video games are interactive and require attention to detail and task management. Take a role-playing game (RPG), like The Witcher or Mass Effect, for example: There’s a long list of main quest objectives you have to complete in order to beat the game. But you also have a longer list of side objectives that are optional in order to flesh out the game’s story and reward system.

For every task you complete, a game will usually reward you with experience points to advance your character’s skill. You’ll also get in-game trophies that symbolize your achievement. This relationship of risk and reward isn’t specific to RPGs (you see it in simulation games like Animal Crossing, too) but it’s particularly rewarding for completionists wanting to accomplish everything they can in a game before moving on to the next.

“A constant barrage of reinforcement occurs often and in succession with video games,” explains Dr. Manos. “The danger of a particular situation and the resolution of a situation gives you a sense of accomplishment, which doesn’t happen very much in real life. This makes video games incredibly stimulating.”

Because of the level of detail and interaction, you often have to pay close attention to visual and auditory cues to accomplish certain tasks in a video game.

“When you’re watching a video game, you’ve got to pay attention to every little thing that comes into your visual field and react to it,” notes Dr. Manos. “Being able to visually contrast, being able to tell the difference between one thing and another, is also a skill that can be developed by playing video games.”

We see this often in action-adventure games like Tomb Raider or Resident Evil, when you participate in quick-time events (or QTEs) where you have to push a button that matches a symbol on the screen within a very limited amount of time in order for something to happen.

But Dr. Manos cautions that although video games can improve focus and hand-eye coordination with mechanics like QTEs, there are real-world examples, like driving through fog, that present a greater opportunity for learning.

“If you’re driving through fog, you have to be hyper-alert to see whatever is in front of you. That’s a skill you really want to learn and that kind of thing can be improved in playing a video game,” he states. “But just because a person can distinguish something in a video game, that doesn’t mean they’re going to be able to distinguish it in real life.”

Improves ability for set-shifting and other cognitive functions

Set-shifting is the ability to move back and forth between different tasks in quick succession. The ability to start one thing and immediately pick up another is an important factor in determining your cognitive flexibility. We often mistake set-shifting as multitasking, but the ability to direct our attention from one thing to the next — like cooking dinner on the stove while listening to a podcast or pausing a video game to start a load of laundry — is an important skill to have.

“People switch tasks all the time,” says Dr. Manos. “That executive function tends to get a little better when playing a video game.”

Plus, other cognitive functions can be improved by video games, too. This 2020 overview of commercial video game studies suggests different types of video games improve different cognitive functions. Action video games, for instance, are highly associated with improving someone’s ability to direct their attention and filter specific information. Traditional puzzle games, like Tetris, were associated with increased performance in navigation, perception and recognition.

Can video games be bad for you?

The difficulty with research in the field of video games is that several studies contradict each other and it’s challenging to determine the exact mechanisms behind what’s being studied.

Some studies are small with a very narrow scope, like this one that suggests children who are physically active have faster reaction times than those who only play video games. Other studies are much broader in their approach, like this one that suggests people who play video games have an increased ability to learn from their experiences and manage conflict.

Part of what makes research into video games and their effect on brain function so controversial is that there’s been a large body of research that’s been slowly building over the last decade that suggests internet and video game addictions are a real problem, despite video game addiction only affecting 3.05% of the world’s population.

Since The Diagnostic and Statistical Manual of Mental Disorders added the term “internet gaming disorder” in 2013, continued research has suggested that video game addiction is similar to other well-established addictions related to substance use disorders. This may partially be because the same parts of your brain, specifically those that release dopamine (the feel-good hormone), are activated when you have any addiction.

Specifically, people who play massively multiplayer online role-playing games (MMORPGs) are believed to be the most at risk for developing a video game addiction because of the ever-present pressure to level up their characters, participate in seasonal or time-sensitive limited events and constant access to in-game rewards.

“Video games are so stimulating that kids want to sustain engagement with them, as if that’s life,” says Dr. Manos. “The next stimulating event is always right around the corner, and you know you just have to get to that corner. That’s what prompts addiction.”

And while one study discovered an increase in concentration and visuomotor abilities like spatial awareness and hand-eye coordination in gamers who played MMORPGs, they also discovered structural brain differences and a loss of self-control.

To better understand the exact impact video games have on our brains, more research is needed to look at the specific cause and effects associated with gaming. In fact, some researchers are determined that a multidisciplinary approach is needed when studying the effects video games have on brain function because of advancements made in the game industry (with game analytics, game design and player experience), alongside advancements in the medical fields of cognitive science, machine learning and social sciences.

How do you know if you or your child is addicted to video games?

As with any addiction, when it starts taking over someone’s life and altering their ability to participate in and enjoy day-to-day activities, there may be some reason for concern.

“When parents start noticing their kids are avoiding certain tasks, they’re replacing certain activities, like playing with friends or participating in sports, with video games, you have to start getting concerned,” states Dr. Manos. “When a child is willing to sacrifice or compromise a formerly high-interest activity in order to play a video game, then it’s useful to begin observing how much time the child is actually playing and perhaps limit their playtime.”

This is especially true if your child has emotional outbursts or gets physically aggressive when they’re asked to pause the game or turn it off.

“It’s not easy to take a child away from a video game,” says Dr. Manos. “When emotional reactions occur when the child is deprived of a video game, that’s a problem.”

If you’re concerned about your child’s time spent playing video games, or if their behavior becomes worse over time, you can ask your healthcare provider or child therapist about whether or not they need cognitive behavioral therapy to help manage any underlying causes that might be leading to an over-reliance on video games.

But at the end of the day, if your child is content, continues to participate in social and physical activities with their friends and family members, and they’re developing critical thinking skills necessary to analyze and navigate the world around them, there’s no harm in allowing for occasional video game enjoyment.

“There have been some positive findings that when parents actually sit down and engage the child while they’re playing video games by talking about it, watching it or even playing with their child, that it can be a very positive experience for parents and kids,” says Dr. Manos.

Sore Loser? How to Help Your Child Handle Disappointment

What To Know About Long COVID in Kids

Could Your Child Play a Video Game to Correct Lazy Eye? 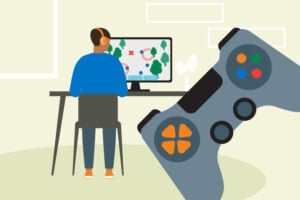 How much play time is too much? Video game addiction is a concern for many parents, but video games can have positive effects on your brain, too. A pediatric behavioral health specialist discusses the pros and cons of gaming.