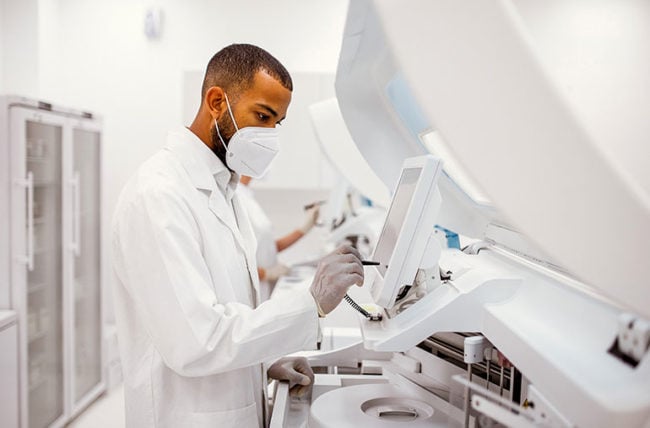 Cancer is a complex condition to treat. Some people respond to certain treatments better than others, and so much of your treatment is dependent on when you’ve been diagnosed, where your cancer originated from and how far your cancer has spread.

When we start talking about rare or aggressive cancers like cholangiocarcinoma (bile duct cancer), that’s especially true — there’s still a lot we don’t know, and navigating misinformation can be hard.

But with the help of molecular profiling (also known as biomarker testing), as well as ongoing research and clinical trials, discovering the right treatment for you is becoming easier.

Oncologist Suneel Kamath, MD, explains just how molecular profiling works and why you may want to consider participating in a clinical trial.

What is molecular profiling?

The cells in your body are distinctly different from one another depending on the type of cells they are. Your kidney cells are made up of different molecules than your skin cells. Your blood cells are different from your brain cells, and so on. These differences also occur in cancer cells, and each cancer type will have different configurations from another cancer. This is how doctors are able to tell that cholangiocarcinoma is different from liver cancer even when bile duct cancer cells are located inside of your liver.

“Liver cancer starts from actual liver cells, called hepatocytes,” says Dr. Kamath. “Cholangiocarcinoma is a cancer that comes from bile duct cells, and these cells are present in the exact same organ as liver cancer cells. They’re right next to each other on a microscopic scale.”

There are distinct molecules, called biomarkers (or biological markers), that set each cell apart from another. These biomarkers can be measured in tissue, blood and other bodily fluids through the process of molecular profiling (also known as biomarker testing or genomic sequencing). For molecular profiling to work, doctors have to take samples from the site of your tumor, or cancer origin. This is often done with a biopsy. Doctors can do this when determining your initial diagnosis through a tissue biopsy. Or they can do a liquid biopsy (blood test) to measure for something called cell-free DNA, or circulating tumor DNA. This is the DNA that’s shed into your bloodstream by the cancer. This type of testing can be done for several different types of cancers.

There are three classes of biomarkers, and each class tells doctors different information about the cancer they’re researching:

“Biomarker testing is a strategy for us to look for something that is potentially targetable beyond our standard treatments like chemotherapy or immunotherapy, which is often given to all patients regardless of specific biomarkers,” says Dr. Kamath.

How does molecular profiling determine your standard of care?

Everybody is different. For some people, chemotherapy might be really effective. For others, a combination of chemotherapy and immunotherapy will work better. And for others, targeted therapies are designed to target specific genetic mutations present in cancerous cells with the goal of reducing harm to other healthy cells in your body.

“For cholangiocarcinoma, there are quite a few gene targets that we’ve found over the years,” notes Dr. Kamath. “We’re looking for specific genetic or genomic targets. There are individual drugs that have been developed that can target those precise mutations.”

Currently, there are three U.S. Food and Drug (FDA)-approved targeted therapies for people who have NTRK, FGFR and infigratinib gene mutations. There are also three biomarkers that respond well to immunotherapy.

“The genetic mutation known as microsatellite instability (or MSI-H/dMMR) is really sensitive to immunotherapy,” explains Dr. Kamath. “That particular mutation or biomarker is present in only 1% to 2% of people with cholangiocarcinoma, but it is important for those people who have it. High tumor mutation burden (TMB) is another biomarker that could indicate more sensitivity to immunotherapy. PD-L1, which is a common biomarker for immunotherapy in other cancers, has less proven value as a biomarker in cholangiocarcinoma. And we’re learning more and more about other targets as time goes on.”

What if you don’t have any known biomarkers?

Of course, there’s a chance that you might not have any known biomarkers that signal to doctors which treatment will be most effective.

“If you don’t have any biomarkers, that doesn’t automatically mean you’re going to do worse,” states Dr. Kamath. “If we don’t have a drug that’s specific to a gene that works really well, then it’s possible the outcomes might not be as good. But not having a biomarker doesn’t necessarily mean the tumor is any more aggressive or there aren’t any treatment options. In those cases, we would use standard treatment options like chemotherapy, immunotherapy or a combination of both.”

No matter the outcome, participating in molecular profiling or biomarker testing is crucial to understanding your own diagnosis and what’s possible. With each test that’s done, doctors are continuing to learn more about the nature of cancer, how it’s spread and how to stop it from spreading.

“If people are interested in making sure they’re leaving no stone unturned, biomarker testing is really important because we never find anything that we don’t look for,” says Dr. Kamath.

Should you participate in a clinical trial?

One thing you may want to consider, especially if you have specific biomarkers, is the option to participate in a clinical trial where doctors can treat you with novel, cutting-edge therapies that could have better outcomes than existing drugs.

“All of these drugs take several years from when they’re first produced or identified to become FDA-approved,” says Dr. Kamath. “A clinical trial is a way to get access to those treatments before other people would be able to. A lot of times, those tend to be significantly more effective than existing standard treatments.”

Dr. Kamath is currently piloting a clinical trial that’s investigating the effectiveness of a specific drug that targets FGFR2 in patients with cholangiocarcinoma and other tumors. FGFR2 is a specific gene that belongs to the FGFR family. Current FDA-approved drugs target the entire FGFR family, which can lead to unnecessary side effects. But if Dr. Kamath’s clinical trial is successful, it could shed light on a new, potentially more effective targeted therapy for people who have the specific FGFR2 mutation — roughly 10% to 15% of people who have cholangiocarcinoma.

“I would encourage anyone with cholangiocarcinoma to get biomarker testing to help personalize their care for their specific condition,” says Dr. Kamath.

Navigating Information (And Misinformation) Around Health Recommendations for Cholangiocarcinoma

7 Key Questions to Ask Your Oncologist

How To Care for Someone With Lymphoma

Is a Preventative Breast Cancer Vaccine in Our Future?

What Is Black Seed Oil?

Is Stem Cell Therapy Right for You? 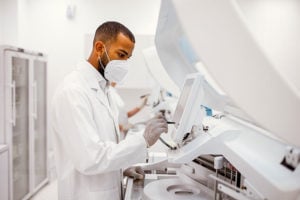 Molecular profiling allows doctors to identify specific biomarkers related to cholangiocarcinoma that signify how effective treatments can be.