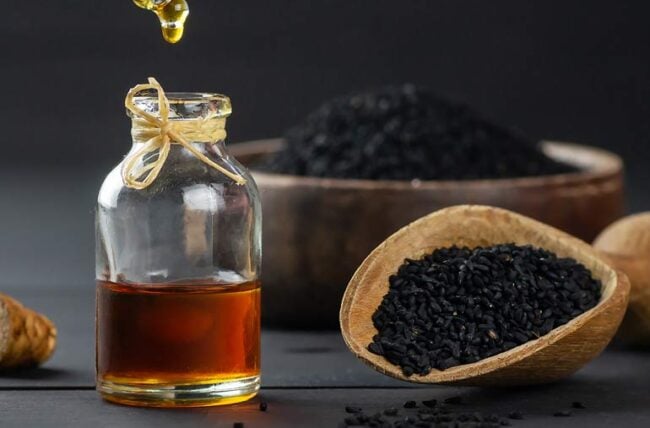 Black seeds (sometimes called black cumin) are produced by the fruit of an ancient plant called N. Sativa. Native to Africa and Southwest Asia — but also grown in places such as the Mediterranean — these plants have been used in traditional medicine for thousands of years. They’re even referenced in the old testament of the Bible and the book of Isaiah.

Black seed oil, which is extracted from the seeds, is often touted as a way to treat certain health conditions.

Are there benefits of black seed oil?

Black seed oil contains a compound called thymoquinone. In an animal study, thymoquinone was shown to have antioxidant properties, while a human study showed anti-inflammatory effects. But a 2014 review of existing studies noted that more research is needed to explore thymoquinone’s effectiveness as a medical treatment.

Similarly, you can’t assume that black seed oil can be a cure-all for certain conditions. Many of the scientific studies to date have involved animals, not humans — for example, one showing that black seed oil could help with diabetes symptoms, and another addressing liver-related issues. Other studies, such as a clinical trial that showed black seed oil had positive impacts for people living with rheumatoid arthritis, have been conducted using only a small group of participants.

“There’s no robust, rigorous evidence supporting using black seed oil for a specific condition,” says Dr. Saper. “However, there are several small studies that raise the possibility of black seed oil being helpful in a number of conditions.”

Dr. Saper stresses that black seed oil “should never be used in lieu of conventional medicine for a given condition.” But he notes that there are several studies “suggesting black seed oil could possibly be effective as an adjunct to conventional therapy” — in other words, as a companion to other medications — for conditions such as asthma, COPD and diabetes.

As an example, researchers suggest designing a study to run for a longer period of time after a clinical trial showing that black seed oil, when taken over a four-week span, was a promising supplemental medication for asthma.

Researchers have also already found that people use black seed oil as a complementary medication during cancer treatment, although more scientific research is also needed to determine the impact.

Risks and side effects of black seed oil

Studies exploring the health impact of black seed oil have also revealed some things to watch out for, Dr. Saper warns.

“There have been case reports of rashes and allergic reactions after people ingested black seed oil and applied topically,” he notes. “There’s also a case report of kidney failure after someone living with diabetes took black seed oil. And some trials report irregular menstrual bleeding (irregular periods), as well as nonspecific gastrointestinal complaints, like discomfort and nausea.”

How to use black seed oil

So, what is black seed oil good for? If you’re using black seed oil as a flavoring for food, it’s generally considered safe. “Studies of black seed oil for medical conditions use a bigger quantity of the oil,” Dr. Saper explains.

But if you’re considering taking black seed oil as a supplement, it’s important you talk to your doctor first. The side effects of these supplements aren’t well-documented and can look different for everybody. “The best evidence that we have for side effects is when they’re described in case reports or in the context of a clinical trial,” Dr. Saper says.

Despite what you might think, herbal medicines aren’t necessarily safe to take. “Herbal medicines have pharmacologic properties like drugs,” Dr. Saper explains. “But they’re different because their side effects happen for many reasons. These include their inherent pharmacologic composition; the dosage you take; the quality of the preparation and the source of the supplements; and the potential presence of contaminants. “

At the end of the day, although there’s some existing research about black seed oil and studies in progress, more human-based studies and rigorous clinical trials are needed to determine what conditions black seed oil may or may not help with — and if it’s safe is to use.

10 Embarrassing Questions You Should Ask Your Doctor 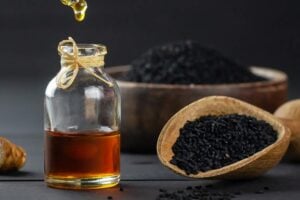 What Is Black Seed Oil?

An expert explains what black seed oil is, and if scientific evidence supports its use.