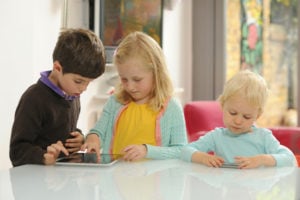 Can Too Much Tech Cause ADHD Symptoms in Your Child?

Can spending too much time on TV, the iPad or video games cause ADHD? Our expert discusses the evidence. Kids often revel in digital media, including gaming and social media. The technology is seductive, and full of color and interactivity — and while this may offer some benefits, it also raises questions.

“The frequent use of technology affects how we behave and connect with one another,” says Michael Manos, Ph.D., Head of the ADHD Center for Evaluation & Treatment at Cleveland Clinic.

“As children increasingly relate to each other through digital media, including Facebook and video games, it calls into question how we communicate on a human level.”

He says that too much time on devices means less time having real face-to-face communication, where facial expression, voice and body language all come into play.

“These are the nuances of understanding relationships,” Dr. Manos says. “How much of these essentials will be lost?”

Another question bubbling up, especially for exasperated parents trying to break through the hold of ubiquitous screens and devices: Can frequent use of tech make children more prone to the symptoms of attention-deficit, hyper-activity disorder (ADHD)?

More specifically, can frequent use of digital media reduce a child’s attention span? Can it make him or her more easily distracted?

According to a new study, it’s possible. The study looked at 2,587 high school students who had not been diagnosed with ADHD. Students were surveyed on how much time they spent on digital media, including social media.

Researchers found that the students who reported using digital media many times a day were more likely than their peers to show these symptoms:

“Does this mean that too much time gaming or commenting on Facebook can give kids ADHD? Absolutely not. But these activities may cause symptoms that are similar to ADHD, even though they can’t cause ADHD itself,” Dr. Manos says.

He explains that ADHD is a genetic disposition characterized by specific hyperactive and impulsive behaviors involving physical changes in the brain.

At the same time, frequent digital media use can bring out latent symptoms or create symptoms that look like ADHD. The problem isn’t digital media in itself, but that it requires an inordinate burden on a person’s attention.

“Every time your computer chimes, your phone beeps, or you get an email, text or notification, you’re first inclination is to respond,” he says.

He uses the example of a child in the classroom. Let’s say despite the school rules, he has a phone in his pocket, set on silent. He can feel it buzzing, so he holds it under his desk to look at it.

“This is an immediate draw on his attention, away from whatever he was learning. It creates a high level of stimulation with alerts and notifications and advertisements that can cause teens to have more difficulty focusing and staying on task,” Dr. Manos says.

Of course, there are also benefits to digital media use. For example, kids who find education tedious with pencil and paper may find they can learn more easily on a computer. Technology also offers a quick, efficient way to communicate.

Technology and children of different ages

Exposure to digital media needs to be limited for all, though it varies by the age. For young children, it’s even more important to limit the use of technology because it has profound effects on how their brains develop.

Current recommendations from the American Academy of Pediatrics (AAP) call for no digital media use for children age 3 and under, and no more than one hour a day for school-aged children. When it comes to older teens, Dr. Manos says it’s essential for parents to set reasonable limits that work for their family.

In addition, he says parents are sometimes unaware of how their own digital media use affects the quality of their interactions with their children.

“I remember one day when my wife and I were at breakfast. There was a family at the table next to us with a baby who was only about 6-7 months old, cooing to her mother, lifting her arms. But the parents were both on their phones while the baby was putting so much effort forth trying to get their attention. She couldn’t.”

He says it’s a challenge in today’s world to restrict media and offers this tip to parents: “Be consistent. Also, work with your child to come to an agreement with your child about what the parameters are.”

How Screen Time Can Slow Your Child’s Development

Is Your Teen Getting Enough Sleep?

What Electronic Toys, TV Can Do to Your Infant’s Brain