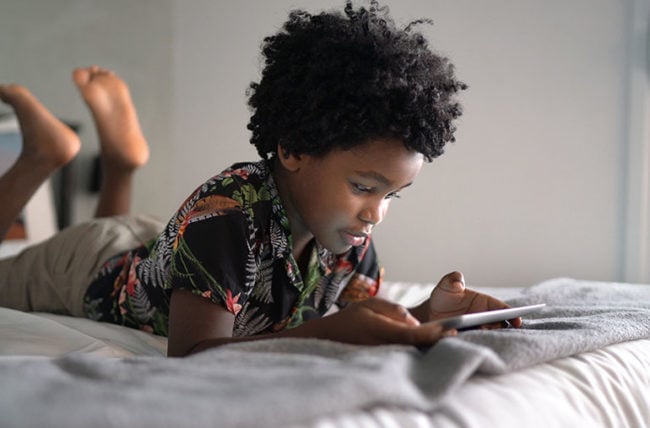 When you were a kid, your parents may have plopped you in front of the TV while they did chores. Kids today, however, have even more options for screen time — including tablets, smartphones and laptops.

However, more options for screen time doesn’t mean kids should opt for more screen time. Pediatrician Noah Schwartz, MD, says The American Academy of Pediatrics recommends “minimal to no screen time in children under the age of 18 months. For kids between 18 and 24 months, it should also be kept to a minimum.” Between ages 2 and 5, it’s less than an hour a day, he adds. “Granted, during the pandemic or when a child is home sick, there is more room to be lenient, but we still need to be mindful of how much content they are consuming.”

“Younger kids need back and forth interaction,” Dr. Schwartz says. “Little kids under the age of two really don’t get a lot of benefit from screen time or just watching TV. At that stage in their life, from a developmental standpoint, it’s all about watching their environment. They’re learning and interacting with people around them. They’re looking for that responsive, emotional connection, and trying to understand social cues. That’s not really there when you’re watching a TV show or playing a video game.”

If your kids are having screen time, it should be age appropriate. Screen time should be something that you do with them — not something they do by themselves.

“Be as involved as you can be when you’re watching with them,” says Dr. Schwartz. “Explain to them what you’re watching. Talk about it together. As your younger kids get closer to adolescence, it’s all about preemptively setting boundaries and setting limits so that screen time isn’t the thing that they do all day and every day. As your children get older, pick a show everyone in the family can watch together. Make it a bonding experience!”

You might be surprised at how many things fall under the category of screen time. “Anything with a screen is screen time,” says Dr. Schwartz. “That includes your TV, phone, tablet, the computer. There’s no specific thing that is — or isn’t — included in screen time. It’s describing you or a child looking at screens.”

Not all kinds of screen time are created equally, however. Actively watching a movie is different from passively having the TV on in the background while doing other things.

“Video chatting, meetings and interacting with people via screens is very different than sitting and watching something,” Dr. Schwartz explains. “Talking to grandparents on FaceTime or having a meeting or school on Zoom is a much more engaging and positive experience versus watching TV, playing video games or using an app on your phone.”

Symptoms of too much screen time

It can be difficult to tell when your kid is having too much screen time. “There’s not one specific symptom that would stick out for each child,” says Dr. Schwartz. “And not every kid that watches a lot of screen time has specific symptoms.”

But chances are good that kids glued to screens will be more sedentary. “They won’t be moving as much, so they will get less physical activity and exercise,” notes Dr. Schwartz. “If you’re not active as much, and not going outside and getting enough sunlight, this also won’t make them feel good and could affect their nutritional health.”

Sleep is another big area affected by an abundance of screen time. “Sleep is so important to growing children, but screens are constant stimulation, especially if used close to bed,” says Dr. Schwartz. “There’s a lot of ongoing research about the negative effects screens and lights can have on our quality of sleep.” To make it less of an issue, Dr. Schwartz recommends screens, especially TVs, should not be allowed in the bedroom.

Dr. Schwartz says he has seen children come into his office who say they have headaches or other physical complaints. “When we talk to them, it’s like, ‘Yeah, you’re spending 50% of your day on a screen, whether it’s your phone or TV or computer. That might be part of the problem.’”

Giving your eyes a rest is also important. “That strain of staring at something, whether you’re too close to it or not, certainly won’t make you feel good,” says Dr. Schwartz.

Younger children also don’t have the ability to communicate well and tell you what they do and don’t want. Screen time doesn’t help cultivate that. “Screen time doesn’t teach them those cues of how to communicate,” says Dr. Schwartz. “They’re just watching something. They’re not watching, ‘How does my parent react when I do this? What does my caregiver do when this happens?’ That affects their emotional intelligence and how they learn to adapt in a changing world.”

How to cut down on screen time

Cutting down on screen time starts with realizing there is a problem, Dr. Schwartz says. “Take a step back and say, ‘OK, let me think about how many hours a day my child watches TV.’ And if you realize, ‘Wow, that’s a lot,’ that’s a first step.”

At the end of the day, determining the ideal amount of screen time is also about balance. For example, at the start of the pandemic, when everything was closed, kids and adults alike felt less lonely when they could video chat with friends and family.

“Screen time can be very harmful — but it can be also very beneficial,” says Dr. Schwartz. “For kids to have had those interactions online, to look at and see their friends and talk to people, was clearly beneficial. It was better than nothing. It’s really all about finding a balance and working with each kid to make sure we address their needs specifically.”

How to Avoid Eye Strain During Virtual Learning 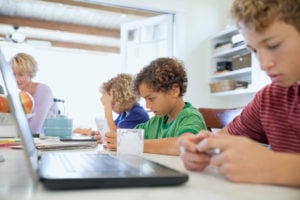 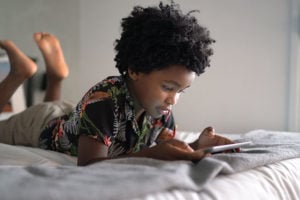 It can be difficult determining when your kid is having too much screen time. An expert shares what’s best for different age groups — and how you can put limits around tablets and TVs.