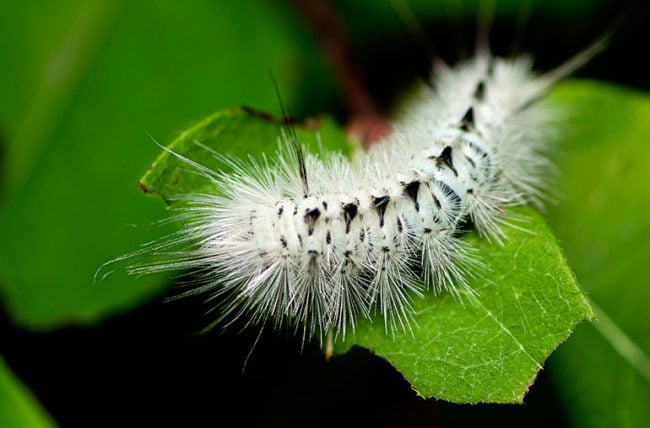 Q: You picked up a caterpillar on a hike and now your arm is an itchy patchwork of red bumps. Is that normal?

A: Don’t be fooled by the cuteness of a fuzzy caterpillar inching through the world in its adorable way. Some of those little critters pack a nasty punch that can leave your skin red, swollen and itchy.

The reason? It’s those tufts of bristly hair that make caterpillars look like a living stuffed animal — ironically, the whole reason why you picked the creature up in the first place.

The spike-like hairs in a few dozen caterpillar species are actually quills connected to poisonous sacs. Touch these hairs and they may break off in your skin, releasing a tiny dose of toxin in the process.

It’s basically a defense mechanism the caterpillar deploys to avoid being… well, manhandled by much larger creatures. (In this case, you.)

Symptoms of a caterpillar sting

Now the good news: Reactions to caterpillar stings usually stay on the mild side. On the scale of insect bites, it normally rates as more troublesome than a mosquito bite but not as bad as a wasp sting.

Your body’s response to the venom leads to a caterpillar rash and skin conditions that can last anywhere from a few hours to a few days. Symptoms could include:

A more serious allergic reaction — including shortness of breath and difficulty swallowing — could develop if you touch your eyes or mouth after handling a caterpillar. There have even been rare reports of anaphylactic reactions.

So what’s your first move following the OUCH moment? (After expressing regret for not leaving the darn caterpillar alone, of course?) Let’s walk through some basic at-home treatment steps to offer relief.

If symptoms escalate despite these steps — think extreme swelling or difficulty breathing — visit a healthcare provider or urgent care center to be safe.

Nature often color codes dangerous creatures, painting them with bright hues that stand out as a warning sign to others in the ecosystem.

When it comes to fuzzy caterpillars, however, those markings often signal something else to people: Pick it up and check it out. That curiosity can come with a cost, as dozens of cool-looking stinging caterpillars reside in the United States.

The pain-inducing roster includes the:

Now it’s true that the vast majority of caterpillars are harmless. (Here’s looking at you, Mr. Woolly Bear.) The best rule to follow? Admire caterpillars with your eyes and keep your hands to yourself.

Should You Pee on a Jellyfish Sting?

Is Medication Making Your Skin Sensitive to the Sun?

Are ‘Soap Brows’ Safe for Your Skin?

What Are Butt Masks (and Do They Work)?

The Pros and Cons of Permanent Makeup 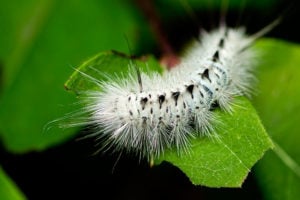 Can a Caterpillar Really Cause a Skin Rash?

Can a caterpillar cause a skin rash? Find out in this short answer from an emergency medicine physician.