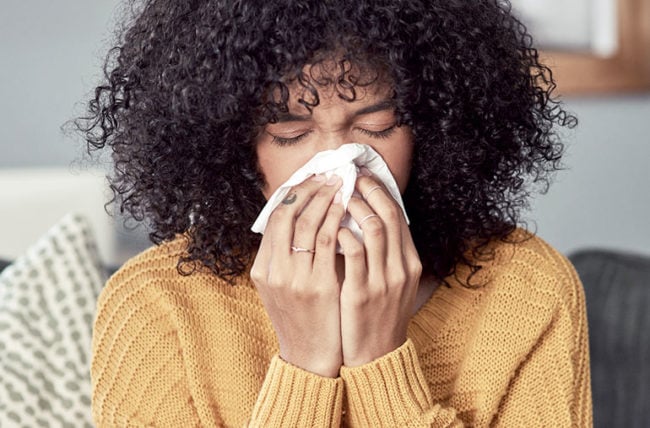 Runny noses usually come and go. You recover from a cold or take some allergy medicine, and your nose is all clear again. But what about a runny nose that goes on and on?

A chronic or long-term runny nose is known as chronic rhinorrhea, and there are many possible culprits. Otolaryngologist (ear, nose and throat expert, or ENT) Raj Sindwani, MD, explains the causes behind a constant runny nose and when to see your healthcare provider.

A runny nose and a stuffy nose aren’t the same, though it’s easy to confuse the two terms. Here’s how they’re different:

Common causes of nasal congestion without the dripping include:

Most common cause of a constantly runny nose

Allergies are an autoimmune condition, when your immune system attacks a harmless substance like pollen or dust. Allergies are the most common reason for a nonstop drippy nose. “People with allergies often have other symptoms, such as sneezing, chronic cough, and itchy eyes or throat,” says Dr. Sindwani.

You can develop new allergies at any age. “Many people are surprised to learn that they have allergies in adulthood, including your older adult years,” says Dr. Sindwani.

Allergies aren’t the only cause of a runny, drippy nose that won’t quit. Several health conditions — some minor and some serious — can cause a persistent runny nose:

Sinusitis is an infection of your sinuses, the tunnel-like spaces in your head that connect to your nose. You might get acute sinusitis after a viral infection or severe allergies. This short-lived sinus infection can cause sinus pain and congestion but often goes away on its own.

Nonallergic rhinitis means the lining of your nose is inflamed or irritated, but not because of allergies. “Nonallergic rhinitis feels like allergies because you have clear fluid running out of your nose,” says Dr. Sindwani. “But your body isn’t having an allergic reaction. Instead, something is irritating your nasal passages, leading to the running and dripping.”

This condition usually isn’t serious, but it can be quite bothersome. Causes of nonallergic rhinitis include:

Many people notice a runny or stuffy nose during pregnancy as hormones shift. Menstrual cycles or menopause can also trigger nasal drip.

If you regularly take any medications and have a chronic runny nose, ask your healthcare provider if your medication could be the cause. Medications that may cause nonallergic rhinitis include:

Nasal decongestant sprays can also cause a chronic runny and stuffy nose. This condition, known as rhinitis medicamentosa, happens when you use these nose sprays for too long.

“Don’t use nasal decongestant sprays for more than three to five days,” cautions Dr. Sindwani. “If you use them longer than that, you can become dependent on them. Then, you get rebound swelling in the nose, and your nasal congestion and rhinorrhea get worse.”

Some people have a sniffer that gets irritated by strong smells and things in the air, like:

Do you run for the box of tissues when you eat strong or spicy foods? You might have gustatory rhinitis, a type of nonallergic rhinitis. This condition causes nose dripping when you eat foods like jalapeño peppers or four-alarm chili.

If you’re having a stressful day (or week), you might have a runny nose, too. “Stress is a lesser-known trigger of nonallergic rhinitis,” says Dr. Sindwani.

Weather can trigger nonallergic rhinitis in some people, including those who don’t have allergies. You can experience a runny nose from rapid changes in:

Nasal polyps are benign (noncancerous) growths in the lining of your nose or sinuses. “Nasal polyps can cause increased mucus production in the nose,” says Dr. Sindwani. “People with nasal polyps can have a constant runny nose, nasal congestion and loss of smell.”

Adenoids are tiny pieces of tissue in the back of your throat. Usually, only young children have enlarged adenoids because adenoids shrink after age 5. If your child’s adenoids are large, they may experience:

5. Foreign object in the nose

Children often try putting things in their noses — and sometimes, those things get stuck. “If there’s something stuck in your child’s nose, they could have chronic nasal drip,” says Dr. Sindwani. “But the runny nose will be on only one side, not both. See your provider anytime your child has a one-sided runny nose.”

Cerebrospinal fluid (CSF) is a watery fluid that surrounds your brain and spinal cord. A layer of tissue holds the fluid inside of your head. But after a head injury or sinus surgery, this layer of tissue may become damaged, and fluid can leak out.

This leakage is known as a cerebrospinal fluid leak. It can cause a unilateral (one-sided) nose drip. A CSF leak needs urgent medical attention because it can lead to meningitis, an infection of your brain and spinal cord. “CSF has a salty or metallic taste, and it usually drips out of only one side of the nose,” explains Dr. Sindwani. “If you notice one side of your nose dripping after an injury or surgery, get medical care right away.”

Malignant (cancerous) tumors in the nose or sinuses are a rare cause of a unilateral chronic runny nose. “A possible sign of a sinonasal tumor is a long-term runny nose on only the affected side,” says Dr. Sindwani. “Usually, you would also experience other symptoms like pain, headaches or nose bleeds.”

When to call your healthcare provider

Seek medical care if you have a runny nose with:

Chronic Sniffles? Find Out Why Your Nose Won’t Stop Running 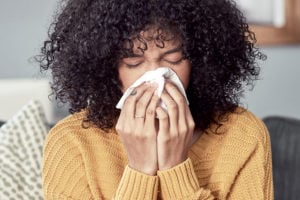 Does your nose constantly drip? Learn what the most common causes are and when to see your healthcare provider.