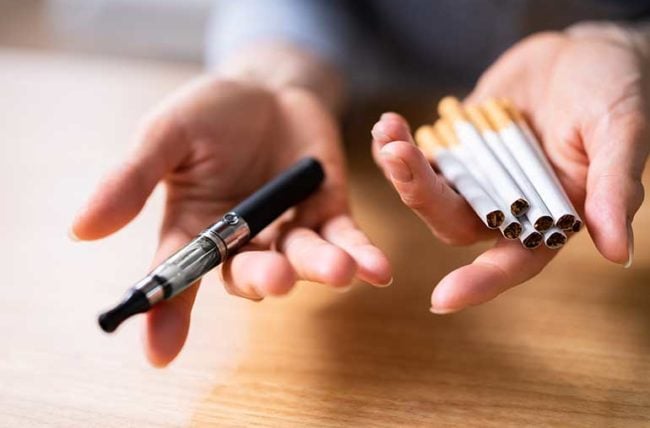 Smoking cigarettes affects many aspects of your body, including your physical endurance. If you smoke, you get less oxygen in your heart, lungs and muscles. This reduces your physical fitness level. It can also cause inflammation in your bones and joints that may contribute to other conditions like osteoporosis.

Contrary to some popular beliefs, vaping isn’t a safe alternative to smoking. In fact, researchers say the rise of vaping “threatens five decades of progress in the fight against tobacco use.”

Research from the Centers for Disease Control and Prevention (CDC) shows the vast majority of vapes sold in the U.S. include nicotine, long known to be a dangerous and addictive chemical. And because vapes can be used more discreetly — including indoors and other places where traditional cigarettes are banned — people who vape can inadvertently consume even more nicotine and other dangerous chemicals than cigarette smokers, says pulmonologist Humberto Choi, MD.

Vaping is on the rise, particularly among teenagers and young adults. Studies have shown that vaping among young people has risen from about 1% in 2011 to a whopping 21% in 2018.

“What we know for sure is that vaping use is not safe,” Dr. Choi says. “A question that we still have to answer is what the long-term consequences of vaping use will be. We know, though, that in the short term, vaping does have the potential to cause a lot of lung damage, a lot of lung injury and inflammation.”

With vaping on the rise, you may be wondering how it affects your well-being. Long-term research is still in its infancy — e-cigarettes have only been available in the U.S. since about 2007 — but there are significant lessons to be learned about vaping based on the dangers of cigarette smoking, which have been understood for decades.

Dr. Choi helps to unpack the physical effects of smoking and vaping.

What are the long-term effects of smoking and vaping?

The dangers of cigarettes can accumulate over time, often starting as more minor concerns and growing over the years into highly dangerous medical conditions, Dr. Choi says.

“What we see with cigarette smoking is that often, people don’t have major problems right away,” he continues. “But I see a lot of patients who later come in with chronic obstructive pulmonary disease (COPD) or lung cancer. They often have the story that they smoked for 20 or 30 plus years, often starting when they were teenagers, which is what we are seeing now with vaping on the rise among young people.”

The CDC says the long-term effects of smoking cigarettes include an increased risk of:

How does smoking or vaping affect physical activity?

Similar effects are likely similar for many people who vape. Like inhaling cigarette smoke, vaping can cause coughing and chest pain or tightness. (Not exactly the kind of symptoms that will help you run that extra lap or increase your energy to do a few more reps in the gym.)

“Some people have this idea that nicotine can be used as almost like a stimulant to enhance exercise performance — that is definitely a misconception,” Dr. Choi says. “Smoking and vaping are not something that is encouraged to use at all, especially if you’re worried about your exercise performance.”

Why are smokers less fit than nonsmokers?

To achieve peak performance, your heart, lungs and muscles need oxygen-rich blood. When you inhale tobacco smoke, carbon monoxide binds to red blood cells. As a result, oxygen is displaced, which reduces the amount of oxygen that’s delivered to your muscles and other body tissues. This causes an increase in lactic acid (the substance that causes muscles to feel as if they’re burning), fatigue and heavier breathing, as well as increased soreness after exercise.

This decrease in oxygen reduces your physical endurance, making it more difficult to do well in sports. It makes it harder to do everyday things, too, like walking up stairs. In addition, if you smoke, your resting heart rate is higher than a nonsmoker’s due to decreases in oxygenation. This means your heart needs to work harder to deliver enough oxygen to your body, making you tire out more quickly during exercise or sports.

Does vaping or smoking help me keep excess weight off?

Some people begin — or continue — smoking as a weight control measure. But the reality is that smoking’s negative effects far outweigh any potential for weight loss that can come from smoking. This is particularly true because smokers are less likely to be physically active.

A good diet and exercise routine is the best way to achieve and maintain a healthy weight, Dr. Choi says.

“We know that from cigarettes when someone’s trying to quit, that one of the potential side effects of that process is weight gain, but not necessarily because you’re using it are you’re going to have weight loss, though,” he adds. “It’s a far reach to consider weight loss a benefit of smoking or vaping.”

Does vaping affect the physical performance of teens and preteens?

Smoking and vaping among teens and preteens can also slow down lung growth, impair lung function and cause their hearts to beat faster than nonsmokers.

Teen and preteen smokers and vapers tend to experience the same negative effects of tobacco as adult smokers, such as:

How to quit vaping or smoking

Nicotine is a dangerous and highly addictive chemical. Quitting vaping and smoking isn’t easy. Many smokers may require multiple techniques to find what works for them, and relapses are common, Dr. Choi notes.

“Even when someone stops smoking, it’s often an active continued process to continue to not use cigarettes. And the same thing is for vaping,” he adds.

It can be done, though. Talk with a healthcare provider about the best options for you to quit smoking or vaping. They may prescribe medication, nicotine replacement therapy or other options. 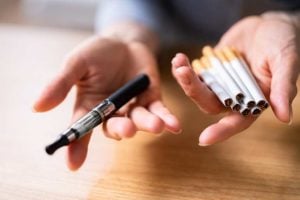 How Vaping or Smoking Impacts Your Physical Activity

Plain and simple: Vaping isn’t a safe alternative to smoking cigarettes. Both vaping and smoking are dangerous to your health and impact your athletic performance.