Every once in a while you hear about a home health remedy that’s so wacky, it has to be real. Why? Well, because nobody would believe it otherwise.

This is one of those moments.

If you or your child has a wart, you should really consider putting duct tape on it. Seriously. Not only is it an effective home remedy, it’s affordable.

Don’t believe us? Honestly, we can’t blame you. It’s a bit out there. That’s why we asked dermatologist Melissa Piliang, MD, to explain why duct tape works, what kind of warts you can use it on and when you need to put down the tape and head to the doctor instead.

How to remove a wart with duct tape

You can double up!

You can also use duct tape in concert with over-the counter treatments like a 20%-40% salicylic acid gel, says Dr. Piliang. By themselves, these treatments may take weeks or months to work. Together, things could move faster.

Why does duct tape kill warts?

Have you ever noticed that your skin looks a bit odd when it’s been covered with a band-aid for a while? Duct tape has a similar effect, according to Dr. Piliang.

“Covering warts with duct tape makes the skin wet, pale and wrinkly, which isn’t an ideal environment for a wart,” she explains. She also notes that duct tape is such a strong adhesive that — when you pull it off — you’re likely to remove a layer of the wart along with it.

Some experts think that the chemicals in duct tape’s adhesive could be triggering an immune response, speeding up the healing process. Others note that warts usually resolve by themselves eventually. Maybe keeping it covered isn’t doing anything to treat the wart, but is preventing the virus from spreading to other parts of your skin.

What kinds of warts can you use duct tape on?

Duct-tape occlusion is only an effective treatment for certain kinds of warts on certain parts of your body. Don’t use duct tape if:

You know the scene in movies where the hero rips the duct tape off the mouth of the dude that’s been kidnapped? You know how said dude never looks super thrilled about it? Now imagine doing it to yourself by choice.

While it’s likely going to be less painful than freezing a wart, for example, that doesn’t mean ripping duct tape off yourself is going to be fun. If you have sensitive skin — or a condition like eczema or psoriasis — it could be downright damaging. And, of course, if you’re allergic to the materials in duct tape, you could end up with a nasty case of contact dermatitis.

It’s perhaps unsurprising, then, that the most common side effects of duct-tape occlusion all have to do with skin irritation: redness, bleeding, rash and redness.

What to do if you still have a wart?

Just because treating warts with duct tape is easy doesn’t mean it’s fast. In fact, you can expect the duct-tape occlusion method to take weeks. It may even take months.

“If the wart is still there after two months, it’s probably time to speak to your doctor about other options, like freezing or laser treatment,” Dr. Piliang recommends.

When to see the doctor

The goal of duct-tape occlusion is to avoid a trip to the doctor, but that isn’t always possible. Give their office a call if:

What To Do for a Spider Bite

How To Remove a Splinter — and When to Call Your Doctor

How To Help Your Baby or Toddler Clear Their Stuffy Nose

What To Expect When You Get a Tattoo 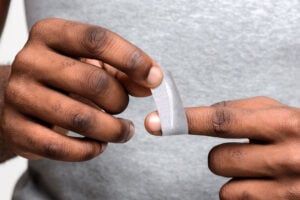 Duct tape is so versatile — you can use it to seal a ventilation duct, DIY a wallet or craft a prom dress! Turns out, this magical adhesive can even remove warts! We asked a dermatologist why this method is so effective, the kinds of warts you can use it on and when you should skip the tape and head to the doctor.