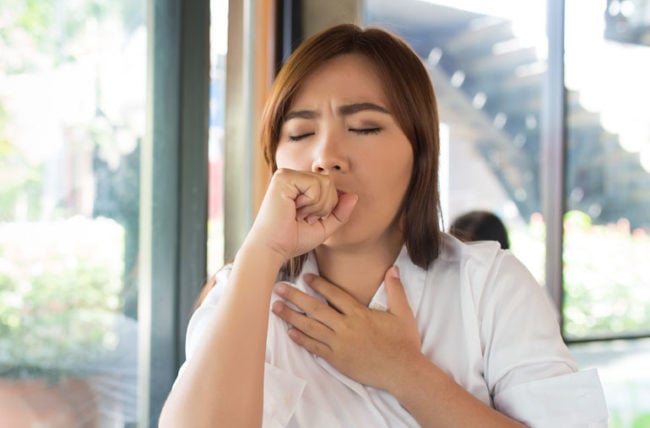 The feeling that something is stuck in your throat is a miserable feeling. The chronic irritation and coughing, or the inability to swallow your own spit is enough to make anyone feel crazy.

Whether you can pinpoint something you ate that might be stuck (like a piece of steak or hotdog), or if the feeling has been plaguing you for months without a clear reason – it’s best to seek medical help as soon as possible.

When it comes to feeling like food is stuck in your throat, it usually comes down to three culprits:

“Most people with food obstruction can almost always identify what they ate that is now stuck in their esophagus,” says gastroenterologist Christine Lee, MD. “But with globus pharyngeus, most people describe the sensation as a lump that has been affecting their swallowing for weeks or months.”

Globus pharyngeus is generally not very serious, however it’s important to distinguish it from true esophageal dysphagia – whether from food obstruction or difficulty passing food through the esophagus.

Dr. Lee says that if something is bothering you, it may be the body’s way of telling you something’s not right, and it’s best to have it checked out.

One minute you’re enjoying a tender and delicious filet mignon – and the next thing you know you’re coughing and trying to clear your throat over a painful lump. No matter how much you swallow or water you drink – the sensation that a piece of steak is stuck in your throat just won’t go away.

Are you choking? You can still breathe, but your throat and chest hurt. What gives?

Food obstruction can be very dangerous depending on what is stuck and where it’s stuck, says Dr. Lee. If a piece of food is stuck in the upper esophagus, it can get dislodged and fall into the wind pipe, which would cut off the air supply and the person might turn blue and pass out. If the food is stuck in the lower esophagus, the person could probably still swallow their spit, but it would be very painful.

“If you can’t swallow your own saliva, start drooling, have shortness of breath or difficulty breathing, you need to seek immediate medical attention or call 911,” says Dr. Lee.

Most people won’t tolerate more than a couple of hours with a food obstruction because the pain is too uncomfortable.

Chronic heartburn and indigestion is typically referred to as GERD. When the acids in your stomach back up into the esophagus, it irritates the lining, which can cause a burning sensation in the throat and neck, coughing or a feeling that something is stuck behind your breastbone. You might even notice that eating certain things, like fried or fatty food, makes your symptoms worse.

Usually antacids or over-the-counter medication can help manage heartburn or indigestion, but if you notice that you’re chronically having these symptoms, it’s best to see your doctor for an evaluation.

“If we suspect someone has GERD, we’ll take a full medical exam and history,” explains Dr. Lee. “Then we might recommend an endoscopy, probe test, x-ray or esophageal manometry, which measures your esophagus muscle contractions when you swallow, to diagnosis it.”

Globus pharyngeus – why do I constantly feel like something is stuck in my throat?

Most people with globus pharyngeus say that the sensation is more uncomfortable than painful. Often times, the sensation that something is stuck in the throat didn’t come on all of a sudden, rather it’s been lingering for a while now. It’s more of a nuisance than anything else.

And what do most people do when they feel like something is constantly stuck in their throat? They cough and try to clear it. Trouble is, if you’re continually coughing and trying to clear your throat, you’re going to further irritate the lining of your esophagus. This can cause even more irritation. It’s like a vicious circle.

Globus pharyngeus is most commonly due to some form of irritation or inflammation, explains Dr. Lee. If the sensation is in the throat, an ENT specialist will typically use a laryngoscope to evaluate the throat and the vocal cords.

“Sometimes it’s a tiny fish bone causing the irritation,” she says. “Once we found a teeny piece of aluminum foil that was stuck in someone’s esophagus.”

But what if they don’t find anything with a scope?

“If we’ve proven that there’s nothing there, we’ll look for signs of post nasal drip, allergies, viral infections, diseases or even signs of anxiety,” says Dr. Lee. “We’ll also consider the environment. Is the air cold and dry? Or is it peak pollen season?”

Dr. Lee stresses that any symptom, however little, should be addressed by a doctor.

Have Heartburn? Here’s How to Find Relief for Your Acid Reflux Symptoms 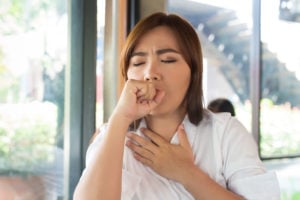 The feeling that something is stuck in your throat is a miserable feeling. Whether you can pinpoint something you ate that might be stuck, or if the feeling has been plaguing you for months – it’s best to seek medical help as soon as possible.