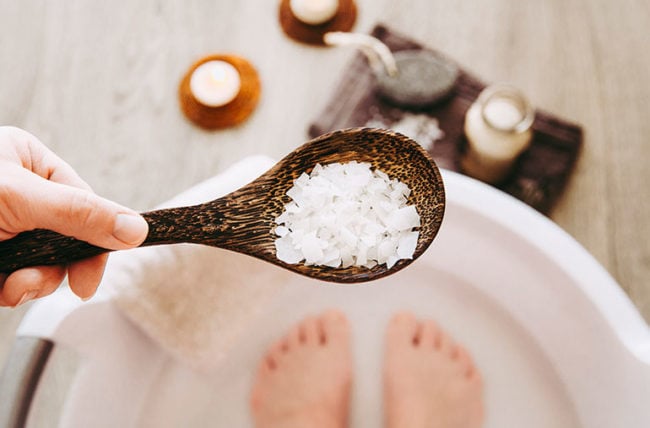 Could your feet really serve as a gateway to release toxins from your body? That’s the theory offered by alternative health companies marketing the magic of foot detox bath systems … for a price, of course.

Buying one of these units for at-home treatment could cost upwards of $2,000. If you’re more of a visit-the-spa person, a half-hour foot detox session typically starts around $30 and can go much higher.

But before you plop down any cash, let’s dip our toes into the scientific waters and review the published research with integrative medicine specialist Irina Todorov, MD.

What is a foot detox?

For starters, it’s a great show. The setup typically looks like a basic foot wash, with a plain tub filled with warm water. The twist? An ionizing machine sends out a low-voltage electric current to charge the atoms in water molecules.

It’s said that these charged atoms attract and neutralize negative toxins in your body. Basically, the impurities gumming up your system get pulled through your feet as if drawn out by a magnet.

Want proof? Just look at the water, which slowly turns discolored during the process. Some gunky crud may also float to the top of the tub.

Claimed benefits of a foot detox

Believers in the wellness system say the ionically charged water gives them… well, a real supercharge to power through daily life. Touted benefits among various foot detox purveyors include:

Of course, one-star reviews labeling the process as a scam and a sham litter many of the same review boards — which brings us to the big question.

Does a foot detox really work?

There’s a scarcity of scientific research when it comes to ionic footbaths, notes Dr. Todorov. The most widely cited study was published a decade ago and offers a rather blunt assessment regarding health claims.

“We found no evidence to suggest that ionic footbaths help promote the elimination of toxic elements from the body,” researchers wrote.

It’s also important to note the disclaimers that usually accompany foot detox systems — primarily, that these units are NOT considered a medical device to treat or prevent health ailments.

The evidence adds up to one conclusion: “From a scientific standpoint, there is no literature to support the claims,” says Dr. Todorov.

Why does the water change color?

The explanation is rather simple, according to researchers. Impurities in the water (think tap water) often react to the ionization process and add a tint. Corroded metal in the unit also may contribute.

Numerous videos posted online show the water in a foot detox tub changing colors even without feet being soaked.

Are there risks with doing a foot detox?

Other than damage to your bank account balance, there’s really no harm in trying a foot detox for most people, says Dr. Todorov. There are, however, some exceptions. You should avoid a foot detox bath if you have:

Many foot detox systems also advise against use by children or those who are pregnant.

Other forms of foot baths

There’s a reality that also helps push the concept of a foot detox: Soaking your feet in a tub of warm water just feels relaxing. Plus, feet take a beating in daily life. They deserve a little TLC, right?

Studies show the power of just a regular foot bath, too. It has been shown to help sleep quality and boost body temperature, for instance. Add magnesium salts to that foot bath and you can reduce skin inflammation, too.

Epsom salt baths also are pretty popular, though scientific research isn’t quite as bullish on the benefits as user testimonials.

“There’s no denying that a foot bath can bring calm and leave you feeling more relaxed,” says Dr. Todorov. “It’s the same thing with taking a hot shower. There’s just something soothing about it.”

So why are these looked at differently than a foot detox? Two reasons — health claims and cost. “You’re basically paying a lot for something where there’s no scientific proof it’s happening,” says Dr. Todorov.

Addressing toxins in your body

If worries about toxins lured you to a foot bath detox, there are better ways to cleanse your system, notes Dr. Todorov. Better yet, they’re simple. “Put your focus on diet and exercise,” she says.

She offered four detox tips, too:

“Living healthier comes down to lifestyle,” says Dr. Todorov. “Changing that isn’t as easy as putting your feet in a tub, but you’re going to get better results.”

How to Prevent and Treat Ingrown Toenails

A Guide To Childproofing Your Home

Should You Take an Epsom Salt Bath? 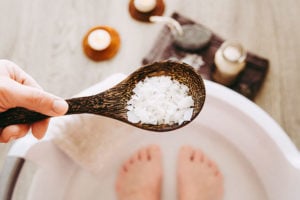 Can a foot detox bath really draw toxins out of your system to boost your mind and body? Let’s dive into the research to find out with an integrative medicine specialist.