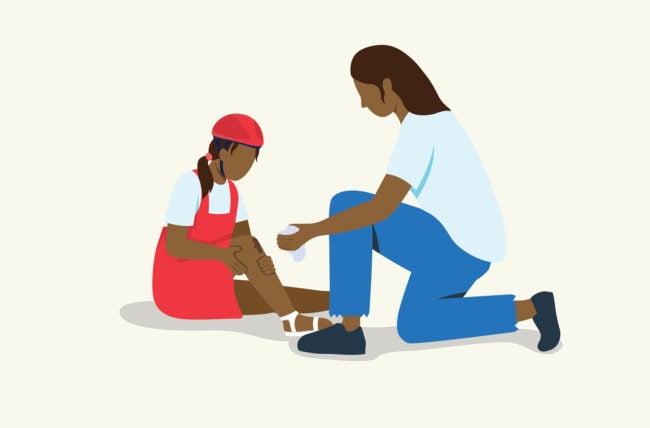 You stub your toe on a piece of furniture and bend over to clutch it.

You accidentally make contact with a hot stove and start fanning your hand.

Your child scrapes their elbow after taking a tumble and asks you kiss it to “make it better.”

If these situations sound familiar, you’ve experienced the basic premise behind “the gate control theory of pain.” This theory proposes that neurological gateways in our brains decide which pain signals get to come through and which are kept out.

Pain specialist and behavioral medicine psychologist Judith Scheman, PhD, explains what gate control is and what it means for the pain you feel — or don’t feel, as the case may be.

What is the gate control theory?

“Gate control is why rubbing a boo-boo works,” Dr. Scheman says. “Part of the reason it’s effective is that it distracts from the injury, which actually diminishes the amount of pain felt. But the other reason it works is explained by gate control theory.”

Researchers Ronald Melzack and Patrick Wall coined this term in 1965 as a way to explain how non-painful stimuli can reach the brain faster than painful ones, saying that “a gate control system modulates sensory input from the skin before it evokes pain perception and response.”

In other words, gate control theory says that neurological “gates” in the periphery decide which pain signals pass through and which are kept out. This impacts how much pain you feel.

How the gate control theory of pain works

To understand gate control, think about what a regular gate does: It creates a barrier between what’s allowed in and what stays out.

Let’s say you’re having a backyard barbecue. When your friends arrive at the gate, you open it up so that they can join the fun. But if a stranger off the street shows up at the same gate, keeping it closed will keep them out of your party.

In the case of gate control theory, there’s no physical gate, of course. Instead, neurological receptors act as metaphorical gates that guard your brain from pain.

When you’re physically injured, your body sends signals to your brain to say that you’re hurt. But according to gate control theory, some signals make it through and others don’t.

When the gates are “open,” you feel more pain; when they’re “closed,” you feel less pain.

The reason for this goes all the way back to our caveman ancestors.

“Gate control is literally a survival mechanism,” Dr. Scheman explains. “Imagine, for instance, that a saber-toothed tiger swiped at you. If you were paralyzed by that horrific pain, the animal would kill you. But if you don’t feel all of the pain, you’re able to fight it or to run away.”

Saber-toothed tigers may be extinct, but in humans, this particular survival mechanism lives on.

The role of large vs. small fiber activity

Stimulating large fiber activity, then, can help “close the gates” by getting to your brain first. They tell pain signals (the ones carried by small fibers) that they’re not allowed in.

And touch and pressure both stimulate large fiber activity, which explains why kissing a boo-boo or clutching a stubbed toe can help take away some of the pain.

“That sensation of something else actually prevents other signals from getting through to our brains,” Dr. Scheman explains. “The gate closes, and that pain signal doesn’t make it into your brain.”

The role of your thoughts

Beyond gate control theory, your mental state also influences your perception of that pain. Feelings like fear, anxiety, depression and a tendency to catastrophize (or to imagine the worst) all play a role in the way you feel physical pain.

Dr. Scheman explains some of the factors that can impact how you think about pain and, thus, how much of it you experience.

“This is all to say that sometimes, we’re just not in control of the messages being sent up to our brain,” Dr. Scheman says. “These messages all go up to your brain — but once they get there, there’s a whole lot that you can do to mediate your experience of pain.”

How to try to lessen your pain

Dr. Melzack, one of the people who first identified gate control theory, also created a questionnaire that helps people identify the types of pain they’re feeling. In it, the words used to describe physical pain are broken down into two categories:

“The affective or emotional component of pain — the suffering component — plays an important role in the perception of how much pain you feel,” Dr. Scheman says. “When people learn to shut off those limbic areas of the brain, they rate their pain as significantly lower and they tolerate it better.”

The key, then, is figuring out how to keep that part of your brain inactive in order to keep those gates closed. These three things can impact your limbic system and lessen your pain.

When your brain is engaged with something else, it can’t focus all of its efforts on your pain. “Keeping yourself distracted turns off that area of the brain, which decreases how much pain you feel,” Dr. Scheman says.

Have you ever heard of people with chronic pain who don’t experience that pain when they’re engrossed in their hobbies? That’s the power of distraction. When you’re recovering from surgery, for example, escaping via virtual reality, knitting, doing crossword puzzles or even bingeing your favorite TV show can help keep your mind busy and your pain at bay.

“When our brain becomes very deeply relaxed, it releases endorphins,” Dr. Scheman says. “Endorphins are the body’s natural painkillers. They’re chemically identical to opioids but without all the negative side effects.”

The way you think about pain matters — and can literally determine how much physical pain you feel and how long it takes you to heal.

“Our thoughts about pain actually play one of the most important roles in terms of how much pain we actually ended up feeling,” Dr. Scheman notes. “If you go in for medical treatment or surgery without addressing issues like anxiety, depression or catastrophizing, the outcome is almost always less likely to be ideal.”

She recommends practicing a technique called thought-stopping, which is exactly what it sounds like: Recognizing certain thoughts as they creep up and then choosing to redirect them elsewhere.

“When you find your brain going down that route, imagine yourself at a stop sign. You get to decide: Am I going to continue down that route?” she says. “You can go down that road — but if you know it’s going to make your pain worse, you may choose to go in another direction.”

Does this mean that pain is imagined?

You might wonder: “Does this mean that my pain is all in my head?”

Well, to some extent, yes — but that doesn’t mean it’s made-up, fake or imaginary. As the line from the Harry Potter series goes, “Of course it is happening inside your head, Harry, but why on earth should that mean that it is not real?’

That’s because, as Dr. Scheman points out, body parts themselves do not feel pain; only the brain can do that. “We can only perceive pain as long as the brain is involved,” she says. “And furthermore, once it reaches the brain, even the same painful stimuli will feel differently depending upon our thoughts.”

So, next time your little one takes a tumble, go ahead and try to “close the gates” by kissing that boo-boo goodbye. It can help more than either of you might’ve realized!

Why You May Feel Better After Crying

How To Deal With Perimenopause Cramps

How Yoga Can Help You Combat the Effects of Osteoarthritis

Side Stitch: What It Is and How To Get Rid of the Pain

Pain and the Brain: What Is the Gate Control Theory?

This theory proposes that our brains contain neurological gateways that decide which pain signals get to pass through and which are kept out. It also says that our mental state can impact how much physical pain we feel.