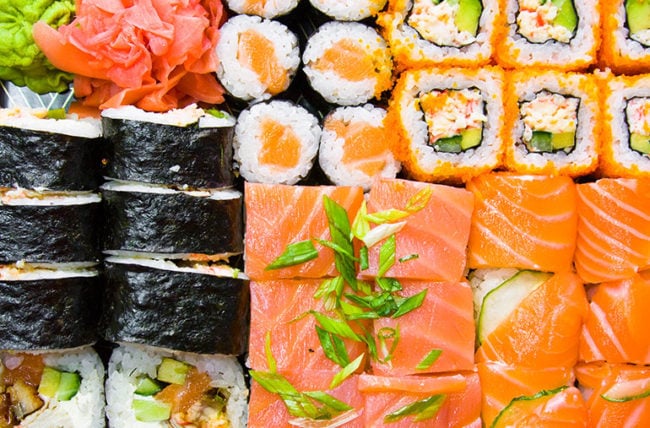 For many seafood enthusiasts, sushi is a perfect meal: well balanced, portable and as delicious to the eyes as it is to your tastebuds.

But then, there’s the whole raw fish thing. How safe is that salmon sashimi, really? Registered dietitian Kate Patton, RD, shares the do’s and don’ts of sushi safety.

Raw fish does pose some risk, says Patton. “Sushi can contain parasites, as well as bacteria and viruses.”

Stories of tapeworms in sushi might sound like urban legends, but it can happen. Heat can kill the parasites in fish, but that’s not helpful for most raw sushi.

Deep freezing fish can also zap the parasites, so the U.S. Food and Drug Administration recommends that sushi fish be flash-frozen at below-zero temps. (That’s lower than a typical home freezer can get.)

In practice, though, there’s no real oversight of sushi chefs to ensure they take that step. “That’s why it’s important to pick a reputable restaurant,” Patton says.

You might also notice some fish is labeled “sushi grade.” Sounds great, right? But once again, there’s no regulation of that claim, Patton warns. So take that label with a grain of salt (or a drop of soy sauce).

And parasites aside, sushi — like many foods — is subject to being infected with bacteria or viruses if it’s not made and stored correctly. That means it’s up to you, the consumer, to take steps to avoid something fishy:

“If you’re dining out or getting takeout, look up the restaurant online to see if it’s reputable and gets positive reviews,” Patton says.

Store-prepared sushi in a refrigerator below 40 degrees. “If you’re buying sushi to go, grab a tray from the bottom of the fridge, where the air tends to be coldest,” Patton recommends.

If you’re shopping at the grocery store, check sell-by dates to make sure the sushi is fresh. Many markets have sushi stations on-site. If that’s an option, ask them to roll you a fresh order.

Freshwater fish like yellow perch or brook trout aren’t safe to eat raw, so stick to saltwater species for your sushi. “As far as raw fish goes, tuna tends to have the lowest risk of food-borne illness,” Patton says. “You can also ask for cooked fish in your sushi. Shrimp and crab are usually cooked.”

Consider leaving it to the pros

Dreaming of mastering the art of the roll? Consider your fish source before you DIY your spicy tuna roll. “If you live near the water or have a local store where you know you can get good, fresh fish that’s been appropriately frozen and stored, it can be safe,” Patton says.

“But unless you’re really diligent about investigating where it came from and the temperature it was stored at, I’d be careful.” If you want to play it safe, practice making sushi with cooked seafood.

Sushi safety for at-risk eaters: Should you avoid it?

Sushi can be a safe and tasty choice. But some people shouldn’t take the risk. Groups that should avoid sushi include:

When you’re careful, sushi has plenty going for it, nutritionally speaking. Fish (especially fattier fish like tuna and salmon) is rich in heart-healthy omega-3 fatty acids. Rolled up with rice, veggies and seaweed, it makes a balanced meal.

To boost the good-for-you factor, Patton says, try these tips:

With a little care and planning, sushi can be a safe and satisfying way to roll.

Is It Safe to Dye Your Hair While You’re Pregnant?

What To Know About Travel During Pregnancy 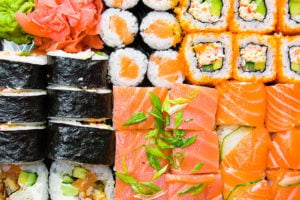 Get the Scoop on Sushi Safety

Sushi may be delicious and nutritious, but is it safe? Learn about sushi safety and how to reduce the risk of eating raw sushi.