They’re marvelous on pizza and decadent in soups and sauces, but if you’re about to cook with mushrooms you picked yourself, proceed with caution.

Amateur foragers and backyard gardeners alike should be on alert for poisonous wild mushrooms, which can grow next to edible varieties and aren’t dangerous to touch. But consuming even a bite of them can be harmful.

And because some parts of the country had a warm and soggy end to the summer, there may be a mushroom boom on the horizon, including a large bloom of poisonous varieties, says critical care physician Aanchal Kapoor, MD.

When wild mushrooms are dangerous

Only about 3% of known mushroom varieties are poisonous, and the symptoms of poisoning can vary from gastrointestinal discomfort to liver failure and death, depending on the type of toxin ingested.

Acute liver failure from mushroom poisoning is relatively less common, but it does happen. And in the majority of cases, it’s because an amateur mushroom hunter or backyard forager misidentified a mushroom.

These mushrooms are white with umbrella-shaped tops and a cup at the base of their stem. They don’t look any more dangerous than supermarket varieties to an untrained eye, and they might actually taste good.

In less poisonous varieties, digestive symptoms of mushroom poisoning develop as early as 20 minutes to four hours after ingestion and normally pass after the irritant is expelled. But in the case of Amanita poisoning, initial symptoms might be delayed, Dr. Kapoor says, usually beginning 6 to 24 hours after ingestion.

Nausea, vomiting, abdominal pain and diarrhea are the most common initial mushroom poisoning symptoms, but Dr. Kapoor says some patients show up at the hospital with low blood pressure, a manifestation of septic shock.

In the case of Amanita mushroom poisoning, symptoms are usually delayed for 6 to 24 hours, by which time the toxins have been completely absorbed. After an initial phase of digestive symptoms, the patient may appear to recover for two to three days, followed by relapse with liver and kidney failure, which could lead to massive bleeding and death.

Doctors use lab tests to confirm the presence of mushroom poisoning, but at the moment, there isn’t a specific drug to treat it. So doctors treat symptoms, starting with aggressive hydration with IV fluids.

Dr. Kapoor says there’s an experimental drug that’s shown promise in blocking liver cells from absorbing the poison. It’s called silibinin, an extract of the milk thistle plant, and although it’s not yet approved by the FDA in the U.S., doctors may be able to use it with special permission.

While some patients recover fully from mushroom poisoning, others require a liver transplant. A small portion of those poisoned by amatoxins die.

Be a smart mushroom consumer

Given the risk, it’s important to use caution when eating mushrooms collected by you, a friend or anyone without extensive knowledge of wild mushrooms.

Dr. Kapoor recommends that people not consume any wild mushroom that hasn’t been identified by an expert. Even washing or cooking poisonous mushrooms won’t make them less dangerous, so if there’s even a question, throw it out. Better yet, stick to mushrooms sold in grocery and specialty stores.

If you suspect that you or someone you know has been poisoned by mushrooms, seek immediate medical attention.

What The Color of Your Pee Says About You

Do You Need Hormone Testing?

8 Foods for Your Liver 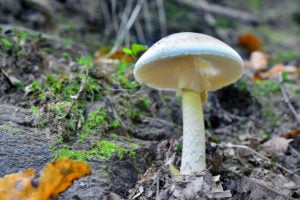 Heads Up: Those Wild Mushrooms Growing in Your Backyard Could Be Toxic

Mushroom poisoning is real – and it can cause liver failure. Beware of certain types of wild mushrooms that could be dangerous, including the most common, “death cap” mushrooms.